May 2016 - Evacuee response to a fire can appear random and beyond understanding. Until relatively recently, fire engineers, safety managers and designers typically assumed that evacuee response would be dominated by panic – people being insensitive to the actual incident conditions they face, causing them to bolt for an exit or freeze to the spot. 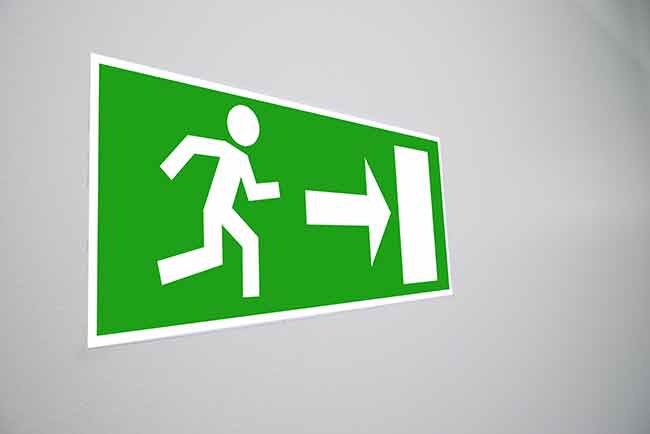 Evacuee behaviour is influenced by the perceived risk Computer simulations allow life-safety personnel to predict evacuation patterns and prepare for responses to fires and emergencies. By Steven Gwynne

Today, it is widely accepted by those working in life safety that evacuee response is more nuanced; it is complex, but not necessarily completely chaotic. Evacuees typically build a picture of an incident that is influenced by the perceived risk, the information and conditions to which they have been exposed, and the social setting. This understanding of evacuee response has been established by research into the evacuee decision-making process and through the examination of real incidents.

However, evacuee responses can be better understood and influenced through the provision of information, allowing emergency managers, designers and engineers to increase occupant safety.

The use of computer simulations can help those working in life safety to better grasp the impact of evacuee behaviour in different scenarios and then enhance design to improve life safety.

This new understanding of evacuee response has enormous implications for the fire-safety community: it provides a better explanation of what evacuees do and more avenues through which public-safety personnel can influence their response. This new knowledge also forms the basis upon which evacuee performance can be quantified – that is, forecast how long it takes a population to reach safety.

This matters for people who are designing for safety, managing an evacuation or fighting the fire.

Quantification allows comparisons to be made between the outcomes of different evacuation scenarios and the correlation between the effectiveness of various designs, emergency procedures, and evacuating populations in response to different fire incidents. In essence, quantification allows the observer to gain some insight into the outcome before an incident occurs. However, the insight gained is only as good as the model employed.

Those who study life safety have developed internal models of evacuee behaviour based on a collection of assumptions, information and theory used to predict and interpret evacuee response. But, bad assumptions equal bad insights. A well-informed model will likely produce useful forecasts; an ill-informed model will make incredible predictions. This is true whether the model resides in the minds of those involved in this type of research, or forms the basis of a computer simulation. A computer simulation based on sound (and transparent) assumptions has enormous potential for the firefighting community: it may allow planners, designers and emergency managers to assess incident scenarios and the effectiveness of the emergency response to them.

Here are five potential uses of computer simulations; each can enhance the understanding of those interested in life safety.

■ The drawing board
Let us assume that a 10-storey structure is to be constructed. A building inspector has requested a performance-based assessment as the design falls outside of the prescriptive regulations. The designer has to establish the life-safety impact of alternative floor designs (door positions, floor complexity), notification systems used (bell alarm or voice alarm), and the procedure employed (total, phased evacuation, or other) in order to assess safety levels and cost-effectiveness of the design given the expected occupant population.

A computational simulation tool is configured to represent a set of scenarios and then quantify the outcome, such as how many minutes it takes for people to evacuate the structure given the building design, the alarm system in place and the procedure employed. The assessment also helps to identify the factors that produced this outcome, suggesting potential procedural and structural changes, if required.

■ Life cycle
The occupant population has changed over the lifetime of the building; it now includes a higher percentage of elderly people. The building’s fire-safety officer wishes to verify whether the previously determined level of safety is still relevant by testing the impact on this new population given the movement impairments that might be expected in such populations. If the performance results have deteriorated, then additional protective measures may be required to compensate for the new demographics such as different alarms, suppression, and refuges. An assessment finds that expected evacuation performance has been significantly reduced and that the emergency plan needs to be modified.

■ Informing response
Building-safety officers and firefighters are regularly trained to ensure that they are prepared should their intervention be required. As part of their training they are presented with animated results from computer simulations, demonstrating the consequences of employing different procedures, fire conditions, and populations. Congestion is shown to be developing, and routes are overloaded or underutilized, leading to prolonged evacuation times and potential exposure to deteriorating environmental conditions. These results help responders better understand both the impact of their interventions and the relative value of the different procedures employed.

■ Safety in numbers
A serious fire develops in the building. During the incident, firefighters respond and employ a pre-determined procedure to secure the structure and the occupant population. The procedure (search patterns, use of access routes) was previously tested to determine the most efficient way of searching the building given the development of different fire incidents, building designs, occupant populations and the tasks that need to be performed as part of the search. Firefighter intervention therefore was tested before being employed, with the results helping to hone firefighter performance and minimize the exposure of the occupant population.

■ Learning from incidents
Finally, information is collected after the incident to better understand how the fire started and developed, how evacuees responded, the effectiveness of the protective measures, and when/where people were affected by the fire. The use of computer simulation tools allowed the investigator to examine the impact of specific factors on the outcome: what if people had responded differently, the population size was different, or the fire had been different? The investigator gained insight into which factors had the greatest influence on the outcome and what procedural or design changes could have improved the outcome.

Evacuee behaviour is influenced by the perceived risk

Computer simulation tools allow those interested in life safety to apply an understanding of evacuee performance to a range of scenarios, and are of value throughout the life cycle of a building. The examination of these scenarios may well be beyond other means of analysis (such as experimental work) given issues of cost, time and ethical concerns.

Given that the limitations of computer simulation tools are acknowledged by developers and users, these tools allow fire engineers and designers to pose questions and develop results that better inform their understanding of evacuee performance. The results then allow fire-service personnel to question design and operational effectiveness, and gain insights before, during and after designs are employed in the field. Of course, computational tools are no panacea given the many challenges faced when fighting fires; they simply enable responders to gain insight into the conditions that they might face and the impact of their actions, therefore helping them to be more informed on their arrival.

These computational tools are now widely used by engineers and researchers. Fire chiefs and emergency managers can access such tools directly or contact the engineering or research organizations where they are applied to quantify evacuation performance.

The National Research Council of Canada in Ottawa employs such tools to explore the movement of people in emergency and non-emergency scenarios – either in conjunction with experimental work or in isolation to address specific client needs, for example, the impact of a new floorplan on evacuation performance. These tools allow scenarios to be examined in more detail, a wider array of scenarios to be explored (that might otherwise not be the case given ethical concerns), and to quantify performance, therefore allowing comparison to be made between different designs and different scenarios. In all cases, these tools can provide additional evidence to allow experts to be better informed when addressing safety challenges.

Steven Gwynne, Ph.D., is a research officer in fire safety and construction with the National Research Council of Canada. Gwynne has worked in the field of evacuation and pedestrian dynamics, and human behaviour in fire for almost 20 years. Follow the NRC on Twitter @NRC_CNRC