Features Health and wellness Hot topics
A story of resilience

It was Nov. 17, 1990, a night that Tyler Pelke, deputy chief at Red Deer Emergency Service, will never forget. 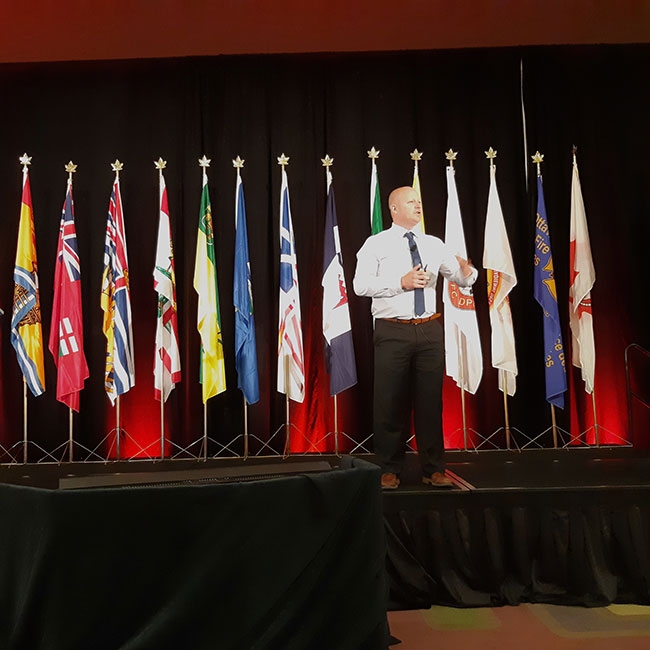 He was 14 at the time and his friend, Curtis Klassen, a year older, was at his house in Altona, a quiet Mennonite community in southern Manitoba.

Tyler and Curtis were good friends. Both were hockey goalies. They played on the same team. Curtis made him laugh. Tyler dreamed of playing in the NHL.

There was a knock at the back door and Tyler went to see who it was. There was no cause for alarm as Altona was a town where nobody locked their doors at night.

At the door was Earl Giesbrecht, somebody Tyler knew but had been warned to avoid. Earl, then 17, was dressed in black and had a duffle bag.

Tyler asked what was in the bag and Earl said, “Those are the tricks of the trade.”

In the bag were rubber gloves, tape and tools to break into houses. Earl then pulled out a .357 Magnum, showed it to Tyler then put it back in the bag.

Later, around 2:30 a.m., Earl went into the kitchen, pointed a gun at Tyler and told him to bind Curtis with the tape which he did.

Earl then bound Tyler and took Curtis into another room.

Earl returned and sexually molested Tyler. He eventually told Tyler that his friend was dead. Then, without warning, he slit Tyler’s throat with a kitchen knife, poured liquid on him, set him on fire and left him to die.

He told his dramatic story Sept. 17 at Fire Rescue Canada 2018, the national conference of the Canadian Association of Fire Chiefs. The audience was riveted as Tyler spoke for roughly an hour about the adversity he faced, his resilience and the power of forgiveness and how understanding your purpose in life is key to dealing with misfortune.

Tyler still recalls seeing blood everywhere that day. His assailant put a blanket over him, doused it with gas and set him on fire, he told the conference.

“I remember telling myself, ‘This is it,’” Tyler says. “I never thought I’d see my family again. His idea was to kill us both and torch the house.”

Somehow, Tyler got out the front door and ran to a neighbour’s house.

“Every time I tried to talk, air just came out. I didn’t think I was going to make it.”

Tyler was taken to hospital in an ambulance.

“The last thing I remember was looking at the docs and I thought, ‘I’m just gonna have a nap.’”

When he awoke, Tyler was told he had third-degree burns over 25 per cent of his body. He needed hundreds of stitches to close the wound in his throat. He was on a ventilator for two weeks.

“I was 10 seconds away from being gone,” he recalls.

Tyler had setbacks. A tube had to be put into his trachea because his windpipe nearly collapsed. And there were skin grafts to undergo.

While Tyler survived that horrble night, his friend, Curtis, did not.

Their assailant was convicted of first-degree murder and attempted murder and handed a life sentence with no chance of parole for 25 years.

Though traumatic, Tyler refuses to be imprisoned by his past.

At the CAFC conference, he told the audience how he confronted his attacker in prison 10 years later and found purpose in life through his journey of forgiveness.

Tyler now uses his experience to let others know they can overcome adversity.

He was featured on the Biography Channel series called, “I Survived,” and now speaks to audiences about the power of forgiveness. He strives to inspire those around him to make every day count.

What helped Tyler get through his ordeal was having social supports, mental toughness, defining his purpose, realizing that some things can’t be controlled, and focusing on helping others. He refused to let an event or circumstance define him and he pressed to understand his purpose in life.

“At some point I had to pick up my bootstraps and figure out where I was going in life,” he says.

Tyler says helping others has been a big part of his healing proces.

“Adversity is going to hit us,” he says, “and the waves are gonna come. What we can do is make sure they don’t hit us so hard.

“I encourage you to live your life so people see that anything is possible.”

Tyler says people are willing to listen and help, but it’s also important for victims to find resilience and a purpose because that will give them hope.

“Having purpose is one of the most important pieces in my life.”

Following his ordeal, Tyler says a nurse gave him some tough love and told him he’s not a victim. That changed his attitude. He took the advice.

“We can act and respond in spite of the conditions we face,” he says.

Tyler says a key to recovery is realizing that people can’t always control their circumstances, but they can recover.

“There’s things that happen. You can’t control everything.”

As part of his recovery, Tyler decided that he had to forgive. So, he went to see his attacker in prison.

He told the conference that he didn’t want to be angry and he wanted to live life with a purpose.

Now, he concentrates on helping others.

“When you start helping others you see how much you have to offer,. It’s so important to take a look and see where you come from. We can take that and have empathy for the people around us.”

Tyler says one of the best things he did was join the fire service.

He got into the fire service 25 years ago and has since continued to rise within the ranks. His goal is to continue helping others.

He believes that’s important because there are firefighters in departments who are suffering from mental health issues.

He’s committed to supporting those people – because others supported him when he went through his ordeal.

Tyler now strives to inspire those around him to turn negatives into positives.

“I’ve fallen into a life of learning and resilience,” he says.

“My job is simply to inspire you to continue to pursue professional resilience.

“I truly believe that if we continue to lead from the heart and gut and continue to care for people, we will continue on the journey of resilience.”