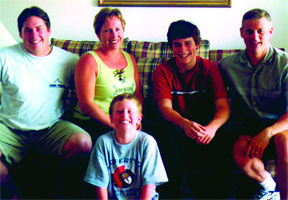 We are a little obsessed,” admits Sandy MacQuarrie who, with his wife Darlene, has competed in the Canadian Firefighter Combat Challenge for many years.  Anyone who knows this couple isn’t likely to argue with that description.  “We have run stairs in hotels, pulled pick-up trucks across parking lots, pulled each other to simulate the dummy,” he says proudly.  “The ‘piece de resistance’ was convincing 10 of our teammates last summer to rent a five-storey tower made of scaffolding and set it up in our neighbourhood for a month before (the) Nationals.”

PHOTO COURTESY S. MACQUARRIE
The MacQuarrie family in March 2004. From left Corey, Darlene, Robert (in front), Lucas and Sandy. The elder MacQuarries are on the Combat Challenge circuit again this year with the boys cheering on the sidelines.

On top of being a source of obsession, these competitions, and the training, have given the MacQuarries so much more — an incredible level of fitness, great memories and a feeling of being extra prepared for anything they might encounter during an emergency response.

Sandy, 42, is the Chief Flight Paramedic with Canadian Helicopters EMS and both he and Darlene, 41, are volunteer firefighters with Station 94 Manotick of the Ottawa Fire Service.  Darlene’s regular job is as a credit risk manager at Farm Credit Canada.  In addition to having firefighting in common, both were born in the Maritimes, raised on farms and studied agriculture, at different universities.

“Darlene was always very active athletically (basketball, volleyball, Woodsmen) and in 1986 was named ‘All Canadian’ in college basketball,” says Sandy. Although he was less inclined towards athletics until after they were married, “I figured it was easier to join her in her activities than to watch from the sidelines.”

Sandy was first introduced to the Combat Challenge through a co-worker who entered the competition in 1997.  “I thought it would be a good goal to train for,” he says, explaining that at the time he was at least 10 to 15 pounds heavier and in “a lot worse shape.”  He convinced four of his fellow firefighters with the Crapaud  (P.E.I.) Fire Department to enter the Tag Team Relay in August 1998, held in Moncton, N.B. Sandy’s team succeeded in qualifying for the Nationals, which were held in Penticton, B.C.  They ended up at the World Championships in Orlando, Fla., that same year.

“Dar trained with us that year,” says Sandy, “got the bug, and joined the department in early ‘99.”  Sandy and Dar started running the individual challenge in June 1999 in Shawinigan, Que., and have been doing it ever since. Somehow, they managed to fit in raising children Corey, 20, Lucas, 17, and Robert, 10, who Sandy likes to say, “grew up in the shadow of the tower.”

Their current fitness routine depends on whether it is “in season” or “off season,” the season being from May to the Nationals in September, and possibly beyond, to the Worlds in November.  The couple does Crossfit resistance training five days per week, squash two days per week, and cardio kickboxing one or two days per week.  They scuba dive, bike and rollerblade in the summer.  In season, Sandy and Darlene cut back on weight training and concentrate on more course work by running stairs at the Bayshore shopping mall and running the full course at Station 53 in Cumberland once per week.

When asked what he gets out of the rigorous training and competition, Sandy says, “The personal satisfaction of being as fit as I can be and compete in an elite, extreme sport that showcases the rigours of firefighting to the general public.”  He has achieved several personal bests, completing the Challenge in less than two minutes twice.  He also enjoys “having my kids see that parents can stay in shape and have fun doing it.”

Darlene also gets a lot from the experience.  Not only has she consistently placed in the top three in almost every competition she has entered, she is the current Over-40 Canadian champion and has been named to the Canadian Firefighter Combat Challenge Hall of Fame.  Beyond fitness and accolades, she appreciates “the chance to cheer on Sandy and train hard together.”  She also credits her involvement with getting the chance to travel and in making some great friends over the years.  She, “will always remember competing in front of a home town crowd,” at a regironal event in Prince Edward Island in 2000.

Their involvement has also had an impact to both in their firefighting duties.  “I’d have to say honestly, that training so much in bunker gear and breathing apparatus makes the both of us much more comfortable in those situations,” Sandy notes. “Being in good shape helps immeasurably on a fire scene.”

With all this training and the accomplishments to show for it, the MacQuarries are incredibly organized.  “We have to be,” he says.  “Our workout times have dropped as we concentrate more on what we really need to accomplish.”  He explains that both their jobs are very demanding, “but our respective employers cut us a little slack.” Farm Credit even sponsored Darlene last year. Sandy adds, “We use vacation time to compete sometimes as well.  One year we competed in a record seven challenges. That was too much!”

Those who are thinking of getting involved in the Combat Challenge can learn much from the MacQuarries. “Start training now,” says Sandy. Set realizable goals (tag team relay in Year One, etc.), and start to watch the event to get an idea of its difficulty.  He warns, however, that being a spectator can lead to overconfidence.  “The seasoned competitors make it look incredibly easy. This leads a few, every year, to try it even though they are not conditioned. The results are not pretty.”  Sandy notes that there is a wealth of training tips, etc., out in the market now that weren’t there when they started. “We have learned so much about training over the years!”  He highly recommends getting together with competitors in your area and training with them. “They are the greatest bunch of folks you could ever want to meet.”

For the future, Sandy and Darlene don’t see themselves giving up the Challenge any time soon. “Believe it or not,” says Sandy, “every year we say ‘this will be our last’ and every year we find we want to keep going.  We will continue in the challenge until we can’t anymore.”

The couple would also like to travel a little more, and they are excited to spend more time on their new Harley motorcycle.  In the spirit of passing on all that the competition has given them, the MacQuarries also want to encourage other competitors’ kids to be active in sports and stand on their sidelines, cheering them on. “Like they do for us,” notes Sandy.