Features
Cover story: After the incident

Disinfecting and removing toxins for firefighter health and well-being is a front and centre concern that the pandemic has only served to reinforce. Technologies are making it easier. 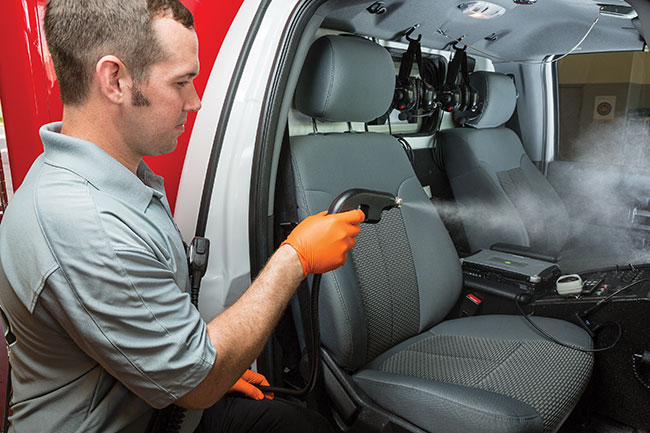 From a cleaner cab to a cleaner firehall, the topic of disinfecting and purifying for better firefighter health has long been on the radar as a matter of importance to fire departments across North America. In 2018, the NFPA published the paper “Developing and Implementing a Fire Service Contamination Control Plan” that recognized the growing concern that exposure to contaminants are a likely source of cancer in firefighters, and other unhealthy outcomes arise from biological or chemical exposures. While the work to date has not included the creation of an NFPA standard for “clean cab” to date, the innovations and best practices being discussed and implemented at the association, firehall and manufacturing level are bringing about widespread recognition of mitigating risks to firefighter health.

The movement has gained momentum and the pandemic has only served to cement the need for technology that will efficiently destroy pathogens, carcinogens and any of the other dangerous foreign substances firefighters may face.

This article serves as a follow-up to the cover story in the November edition of Fire Fighting in Canada that focused on products, services and best practices for a cleaner cab. For the May edition, we are revisiting spraying systems for disinfection as well as look at recent technologies in air purification.

Spray it away
The AeroClave decon system is one innovation proving itself efficient and effective at mass disinfection using fogging technology. AeroClave, an American company, was founded in 2003 by Dr. Ronald Brown, an emergency room physician, as a way to disinfect aircraft in response to the SARS epidemic of that time.

In Canada, John Witt, president of Safetek Profire, counts Safetek as a pioneer in Canada’s cleaner cab movement and is the exclusive AeroClave distributor for the public safety market in Canada. Witt has developed expertise in cleaner cab practices,  presented on the subject at fire industry events and shared his knowledge with Fire Fighting in Canada as part of this feature. The AeroClave system is being used at a number of Canadian fire departments, including Winnipeg, Vaughan, Ont., multiple British Columbia departments including Vancouver, Burnaby, Saanich and Richmond, where Fire Chief Tim Wilkinson provided insights for the clean cab article that ran in November.

Here’s how the AeroClave misting technology works to prevent the spread of infectious disease, including COVID-19 (Health Canada approved when used with its cleaning partner Vital Oxide).

Vital Oxide, a broad-spectrum hospital disinfectant, is effective against yeasts, bacteria, viruses and mildews, all of which can be hazardous to human health. Vital Oxide destroys the well-known not-so-novel pathogens — MRSA, Ebola, HIV-1, Hepatitis B and C, E. Coli, Norovirus, H1N1 and Legionella alongside COVID-19. The main ingredient in Vital Oxide is chlorine dioxide and although chlorine is in the name it is not comprised of the same chemistry as household bleach. Vital Oxide contains no volatile organic compounds (VOCs), is safe on the environment and people, doesn’t irritate the skin or require gloves and no rinsing is needed.

One of the benefits AeroClave sells itself on is the premise that manual cleaning can mistakenly spread pathogens around rather than eliminate them. It also bills itself as less labour-intensive and cost-effective. There are three phases to the AeroClave process that can be used in rooms or fire trucks: Injection (apply the aerosol), Dwell (let sit for at least 10 minutes) and Aeration (remove the solution through ventilation or air circulation,  though it will also break down naturally).

In 2015, James White, then fire chief in Winter Park, Fla., authored a case study for AeroClave on the department’s use called “Reducing the Invisible Threat of Infection in Fire and EMS Personnel”. In regards to reducing the personnel and financial impact of infection, a retrospective analysis showed a 34 per cent reduction in unscheduled leave time since the AeroClave was added to the disinfection routine, which White wrote that it created a positive fiscal impact alongside being good for health. The analysis acknowledged there are number of factors that prevent a direct cause and effect use of departmental sick leave as sole indicator of AeroClave cost-effectiveness – the time off may not always be due to illness, they may work other jobs in high risk health care settings, there are enough variables that it wouldn’t stand up to rigorous peer review, but the trend affirmed the health of the department’s firefighters was headed in the right direction. The cost is cited at about a dollar (US) per treatment. In our November “Clean Cab” cover story, Chief Wilkinson in Richmond, B.C., shared that the department has been using an AeroClave system for several years that is incorporated into the cab and plugged in from the outside so no one has to enter to start the decontamination process. Wilkinson also concluded that it is a cost-effective system with visible reduction in sick time due to illness.

In 2015, White was citing MRSA as one of the significant concerns for first responders. Today, it is COVID-19. There will be something else. Fun fact: National Geographic reported that, “an estimated 10 nonillion (10 to the 31st power) individual viruses exist on our planet—enough to assign one to every star in the universe 100 million times over.” We are surely and infinitely outnumbered. 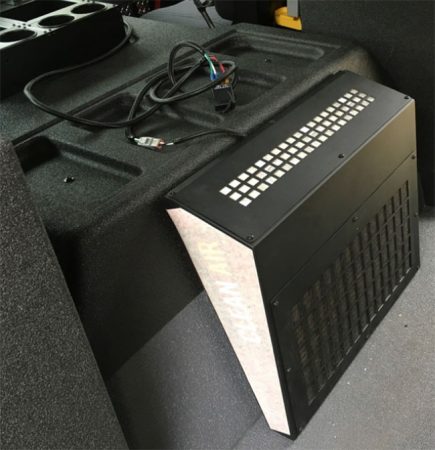 Cleaning the air
Alongside disinfection via cleaners, there are technologies making strides in the realm of air purification in the cab. Joe Lichtscheidl, a Rosenbauer sales manager, talked to Fire Fighting in Canada about the company’s patent-pending CleanAir re-circulation scrubber system, which has been designed and tested to the ASHRAE Standard 145.2-2016 in collaboration with the Particle Calibration Laboratory at the University of Minnisota. The University of Minnesota provided a summary of results from their testing. A 50 per cent reduction in VOC concentrations happened in about two minutes with a further 80 per cent reduction occurring by the five-minute mark.

The CleanAir system employs two filters to get the job done, cycling three times every 10 to 15 minutes. In stage one, the large particulates, like soot from fire, are pulled from the air with an electrostatic MERV-15 filter. In stage two, activated coconut shell carbon and potassium permanganate work together to remove VOCs. The two filters work in conjunction with one another, says Lichtscheidl. The CleanAir system can be retrofit to almost any vehicle.

CleanAir, which was introduced at the 2019 FDIC show, is available through dealerships in the U.S. and Canada.

In addition to AeroClave, Safetek Profire sells the Active Air Purification System as part of its suite of cleaner cab technologies. The Active Air system uses advanced photohydroionization (PHI) and UV technology to kill 99 per cent of pathogens, including COVID-19, in the air and on surfaces, having shown to reduce the trajectory of sneeze germs by 99 per cent within three feet. Active Air can also be retrofit to vehicles, and Safetek’s website describes the mechanics of how it works as this: “Low doses of airborne hydroperoxide ( H2O2) are generated and revert back to oxygen and hydrogen once they come in contact with and eliminate bacteria, creating a safer and cleaner cab environment.” Active Air Purification is shock and vibration tested and is available through multiple dealers.

Being a firefighter is an inherently risky but also inherently rewarding job. The health and wellness of our nation’s fire fighting crews, who are truly all hazards responders, continues to be an area where technology is rising to the occasion and delivering effective and efficient ways to provide a cleaner cab.