At approximately 07:25 on Wednesday, Dec. 31, the homeowner of a farm just outside the community of Sunderland, Ont., was leaving for work when she discovered smoke coming from the barn. At 07:28, the home owner’s phone call was received at the Oshawa Fire Communications Centre. 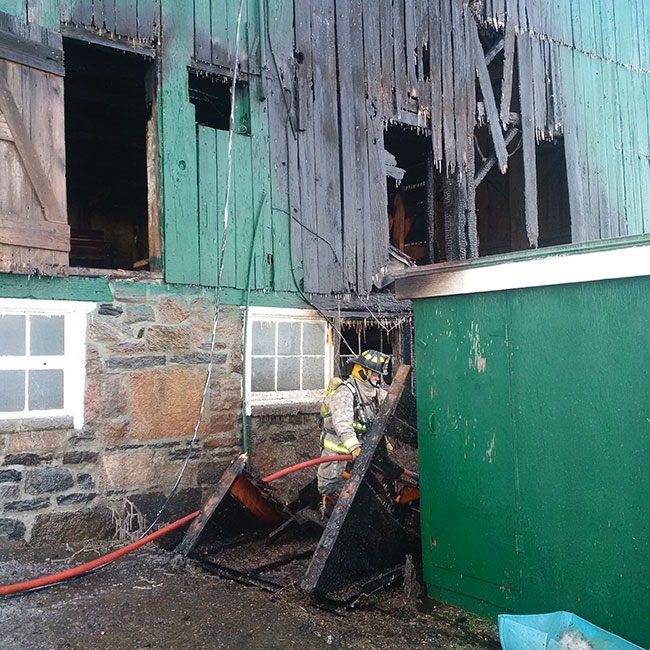 At 07:34 the communications operator at Station 8-1 contacted the fire chief at his place residence requesting his response.

At 07:34, Oshawa Fire paged the volunteer firefighters from Station 8-2 and Station 8-3, and employed a mutual aid from the Uxbridge Fire Department.

The response from Station 8-3 consisted of Tanker 8-3.

The response for the mutual-aid request consisted of Tanker 7-4 from Uxbridge.

The wind was out of the northwest (directly at the fire) at approximately 20 kilometres per hour (km/h) and the temperature was -12 C.

Barns in the Township of Brock, as with several other areas, are usually very large, fully operational, built to last a very long time, full of animals/hay or equipment and not serviced by municipal hydrants. This particular barn was no different, except for the fact that there were no animals in the barn and it contained a minimal amount of hay or equipment. The exterior of the barn had been recently painted and it appeared to be in great structural shape.

When Pumper 8-1 arrived at 07:40, an attached milk house on the Alpha side of the barn was fully involved and the fire was starting to spread to the exterior and interior of the barn above the milk house. The Pumper 8-1 captain assumed command and instructed the crew to advance a 1 1/2-inch hoseline to the milk house for a defensive attack in an attempt to contain the fire and control exterior fire advancement. The captain also instructed Tanker 8-1 crew to establish a water supply using port-a-tanks and tanker-shuttle operations. Rescue 8-1 crew members were instructed to set up accountability and prepare for entry control.

A second captain on Pumper 8-1 assisted command with performing a 360 of the barn, which, upon completion, indicated minimal interior smoke with good visibility. However, there was fire involvement on the top floor of the barn, Alpha side and the fire was advancing quite quickly. In consultation with command, the captain and another firefighter advanced a 2 1/2-inch hoseline to a large doorway on the Bravo side, a gated wye was attached and a 1 1/2-inch hoseline was used when firefighters entered the building. Prior to entering the barn, all defensive-oriented tasks were stopped and a rapid intervention team (RIT) was established. The captain and the firefighter, wearing SCBA protection, entered the barn and commenced an aggressive interior fire attack on the Alpha side.

When Pumper 8-2 arrived at 07:50, command assigned the captain and the crew to assist with interior fire attack on the Alpha side.

When Rescue 8-2 arrived at 07:52, command assigned the captain and the crew to RIT. This allowed for the initial RIT members to ready for a defensive attack, if needed.

When Car 8-1 arrived at 07:55, the fire was slowly being brought under control, white smoke was rising from the Alpha side of the barn, a good sign for a fire chief to see. But, by no means was the incident finished; we had a few hours of overhaul ahead of us to assure fire control and to declare a loss stop.

Command informed Car 8-1 via face-to-face discussion of all activities that occurred prior to his arrival and also of the following activities:

Upon completion of the face to face, Car 8-1 performed a walk around of the barn and assumed the responsibilities of safety and information for command.

With all crews assigned a task the fire was declared under control, which command announced at 08:30. Overhaul of the fire commenced immediately after fire control and command announced loss stop at 11:20. Command was terminated and all fire apparatuses cleared the scene at 11:20.

When the emergency involves a barn fire it usually means 10 or more hours of fire fighting and overhaul, and the barn is generally destroyed, but not always.

Rick Harrison is chief for the Township of Brock Fire Department in Ontario. He is a 35-year veteran of the emergency services, 30 of which have been with fire. Email Rick at rharrison@townshipofbrock.ca