At 9 p.m. on Nov. 20, the tones went off for a tank truck fire in our district. In Slave Lake District, 50 super B oil tankers haul oil products through the region daily. 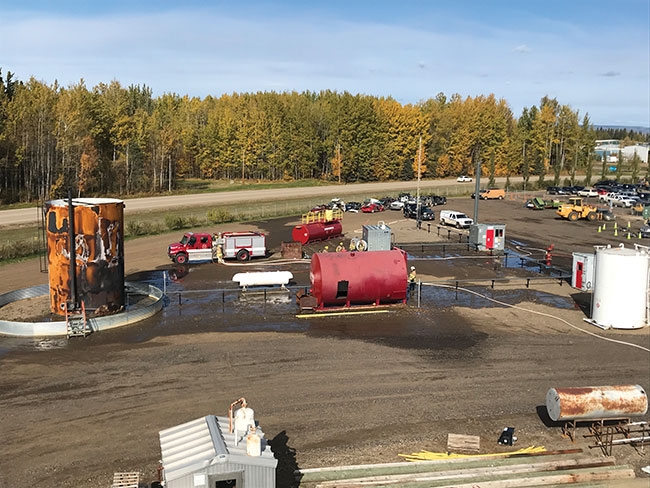 The trucks contain unprocessed oil, diesel, gas, propane and condensate. It is not unusual for something to happen, and for one to crash or catch fire every six months or so, leaving us with what becomes a fairly large, complicated callout.

On this particular night, as our firefighters were responding to the fire hall in Slave Lake, the call was changed to two tank fires. Again, this was not unusual as we respond to something like this (although usually smaller) once every couple of years as our region has plenty of oil and gas facilities within its borders.

Since 2010, when a large tank fire in our district was extinguished by our crews, we have been building an oil and gas fire training pad. It started with a large tank from a previous fire that was donated by a local oil company and hauled to the site, and a couple of pipe racks from flange fires.

This project has grown, with grants and donations from the oilfield, and has a 750 (barrel) oil (bbl) tank, tank heater unit, treater, separator shack, wellhead, flare stack, flare knockout drum, and line heater.

There is an alarm panel and alarm lights at a mock office structure and the ability to simulate nine fires with different scenarios. As a result, our firefighters have continued to improve year after year.

It came as no surprise, then, that on this call our firefighters took up the challenge as they have before, putting all our foam (AB and AFFF) into a pickup with our large 65-mm foam educator/nozzle.

They had a lot of questions like the distance to the fire, whether there was a water source at the site, the volume and type of product in the tank, and whether oilfield personnel would be on site with us.

With a few answers in hand, we decided to send out a complete first strike with 4,100 gallons of water on three trucks and 100 gallons of foam (our entire stockpile). Sixteen firefighters jumped into the rigs and two pickups and we were off to the fire.

The location was 42 kilometres from Slave Lake in a remote part along Highway 754. In this area, they had been drilling all fall and into the winter so we knew there could be many facilities, both small and large. As we drove down the highway, we started to smell the hydrocarbons burning, and around one final corner we saw an oilfield operator waving to us that this was the site.

We knew that if we positioned ourselves correctly and started cooling the tanks we were in a safe location.

Previous experience and exercises at our training site gave all firefighters a level of confidence to start the attack.

A Blitzfire 65-mm monitor was deployed for cooling and a 65-mm hose was attached to our foam educator/nozzle. The exposure crew used a 38-mm hose with a 38-mm bumper cannon as backup.

With only 4,100 gallons of water and 20 pails of foam, we knew taking extra time at the start to plan and place equipment was worth it. Due to limited water, all units had to act as a team. No water or foam could be wasted.

Firefighters poured a mixture of foam and water onto one of the burning tanks. It gave quite a fight to start as the tank was still about half full of raw oil. But after about four pails of foam were put into the tank a blanket started to form and the fire slowed considerably.

With a small sigh of relief, we started pouring a mixture of foam and water onto the other burning tank, which was about one-third full of oil. It let out a few big burps of fire and slowly started to die.

The oil and gas fire training pad where firefighters in the Lesser Slave Regional Fire Service in Alberta hone their skills.

What happened next could have changed the firefight. One of the tanks that had been burning relit and let out a few vicious clouds of fire and gas with ominous looking black smoke. The fire attack crew was quick to move foam back to the tank and within 45 seconds it was contained again.

After using up all of our AB foam we started to use the AFFF to put the barrier of protection and fire suppression on the first burning tank and then the second one.

With three pails of foam and 400 gallons of water left, the fire was down and the tanks were cooling.

We waited about 10 minutes while exposure crews used their truck to continue cooling the other 1,000 bbl tanks and the propane tank.

Crews were dispatched with thermal cameras and gas detectors to check on the wellhead and a separator shack. They returned and reported that all was well, with the exception of some burning insulation on pipes.

The last 400 gallons of water and foam were put into the two tanks that had been burning and the exposure team moved their truck to extinguish the burning insulation.

Amazing teamwork, trucks and equipment, together with a favourable wind and some great training, enabled our team to extinguish the fire in under an hour from the first page. That included setup at the hall, response, setup at the scene, and the fire attack.

I don’t know if anyone realized just how well it had gone until we got back to the station and watched video footage that had been shot by Hellfire Heroes, a Discovery Canada reality series that was with us during the fire.

I had no sooner pulled into the hall when my phone rang with congratulations from our partners at our training centre. They were very pleased that everyone’s hard work at the training centre had paid off so well and so quickly. Without our partners in the building of our training centre, and the assistance of the local, knowledgeable oilfield workers on site, the fire may have got significantly worse.

Pride, professionalism and training helped our firefighters overcome this difficult situation. You could see it in the face of each firefighter as the realization of what we had built with our partners and the countless hours of training came together for the best possible outcome.

Jamie Coutts is regional fire chief at the Lesser Slave Regional Fire Service in Alberta. The fire service is a multi-jurisdictional volunteer fire department operated under one administration and command. The service has five fire halls responsible for a territory of about 10,000 square kilometres.