To Canadians, Iqaluit (population 6,184) is the capital of Nunavut. But to Iqaluit Fire Chief Gregory Jewers, Iqaluit is a challenge. The reason: Thanks to its isolated location, the IFD is alone no matter how big the fire. "There's no one out there to provide mutual aid," Chief Jewers explains. "We're on our own." 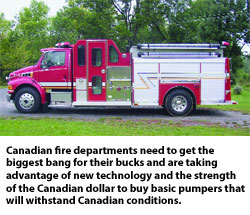 To
Canadians, Iqaluit (population 6,184) is the capital of Nunavut. But to
Iqaluit Fire Chief Gregory Jewers, Iqaluit is a challenge. The reason:
Thanks to its isolated location, the IFD is alone no matter how big the
fire. "There's no one out there to provide mutual aid," Chief Jewers
explains. "We're on our own."

This is why the IFD, comprising 19
staff and 25 volunteer firefighters, is so pleased to have received its
new Smeal pumper. "It's got a 400 hp headend engine and a 1,000 gallon
UPS polytank," Chief Jewers says. "The pumper also has a 1,500 imperial
gph Watrous pump and an onboard CAFS [Compressed Air Foam System]."
Jewers adds that, "Our local government fully appreciated our need for
this pumper, so we had no trouble getting them to fund it."

The
Iqaluit Fire Department is one of many across Canada that are buying
new apparatus either to replace aging equipment or to keep up with
expanding populations. In addition, sales are being driven by
compliance with updated NFPA standards, at least by those departments
that can afford to comply.

"With the introduction of Annex D,
which calls for the replacement of all apparatus 25 years old and older
and new NFPA safety guidelines, many small rural departments are
finding the costs of acquiring a new apparatus rising out of their
budgets," notes Dale Hawes, U.S. sales rep for Fort Garry Fire Trucks
in Winnipeg. "Most reputable manufacturers want to meet or exceed NFPA
standards and this does add to the final sales price of the truck. In
addition, EPA emission standards are becoming more stringent and are
increasing the cost of an average chassis."

So what are Canadian
fire departments buying, and why? "Canadian departments take a more
utilitarian approach to buying equipment, in comparison to U.S.
departments," says Jeff Resch, Pierce Manufacturing's vice president of
sales. "There are not as many bells and whistles on Canadian trucks and
it doesn't matter if the department buying is in the city or country."

Lethbridge
Chief Brian Cornforth agrees, to the extent that his department focuses
on buying "the usual pumpers" and other well-defined pieces of
equipment. However, keeping things simple does not mean not keeping up
with the times. For instance, "The new articulating platforms and the
new technology out there offers higher payloads and more versatility,
which is what we are looking for," Cornforth says.

According to
Dave Purdie, general manager of Carrier Emergency, the E-One dealer in
Ontario and Atlantic Canada, even with the lower U.S. dollar, what gets
built onto apparatus is still dictated by budgets.

"This means
we often end up building whatever the department can afford, rather
than what they would like to buy," adds Harvey Goodwin, co-owner of HUB
Fire Engines in Abbotsford, B.C.

That's true, says Len Garis,
chief in Surrey, B.C., and budgets aren't getting much bigger. In his
case, "B.C. and Canada is experiencing one of the strongest economies
seen in the last 30 years, [but] unfortunately this has not translated
into a windfall of new tax dollars for local government." This means
continued tight budgets for Surrey Fire Service, with new money going
to "soft services" such as recreation and social issues.

Safety is a priority in other parts of the country too.

"This
year, one of our trucks had a serious rollover that we never want to
repeat," says Roger Zanettin, director of apparatus for the Windsor
Fire & Rescue Services. "That's why we're going for side-roll
protection packages, seatbelt tensioners and stability warning
systems."

Fort Garry Fire Trucks is seeing an increase in
chevron and reflective stripping at the rear and on doors of apparatus
to increase the visibility of trucks while on the side of highways,
says Hawes. Meanwhile, "to reduce injuries caused by firefighters
climbing on top of apparatus, many foam system manufacturers are
offering optional foam tank fill stations at the pump operator panel to
fill a foam tank from a foam pail.

Finally,
modular apparatus systems are popular with Canadian departments. "The
current trend in customer demand is a movement toward walk-around
rescue, with separate command post modules . . . and a trend towards
pumper rescues from straight triple combination pumpers," Hawes says.
"The movement in rescue models is to keep firefighters away from the
equipment on rescues."

The complexity of these requirements
underlines how much more sophisticated firefighting has become over the
years. Buying the biggest and most powerful pumper is no longer enough.
To do their jobs properly, fire departments have to purchase apparatus
incorporating cutting-edge fire suppression, safety and communications
equipment. They also have to understand the basics of apparatus
construction and capabilities to get the equipment they need for the
right price.

Mindful of this, apparatus manufacturers are
providing much more pre-purchasing information to departments than they
did in the past.

"Education in the form of presentations and
brochures describing the manufacturing process and desirable features
are helping the fire chief to streamline the department's
specifications and maintain a quality and productive apparatus well
into the expected 20- to 25-year lifetime of the truck," explains
Hawes. "A reputable manufacturer is able to supply specifications to a
fire chief almost immediately," he adds. "Leasing programs are
available that can defer the costs over a period of time."

Despite
tight budgets, Canadian fire departments are pushing ahead with their
apparatus purchases, with an eye to enhancing firefighter safety,
vehicle capability and overall fire suppression effectiveness.

The
good news? Thanks to the weak U.S. dollar, "there is no better time to
acquire equipment," says Chief Garis. "Most of the large-ticket items
are valued or influenced in some way by the strength of the U.S. dollar
. . . The last quint I purchased was 15 per cent less than ones
purchased four years ago."