Like any department rolling into the 21st century, the Calgary fire department has seen its share of vehicles. Rescue trucks, pumpers and aerial ladder trucks are the backbone of any major municipal fire department and while there have been major advances in construction, the role of these apparatus has remained the same. 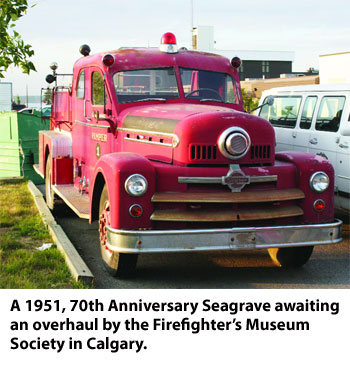 Like any department rolling into the 21st century, the Calgary fire department has seen its share of vehicles. Rescue trucks, pumpers and aerial ladder trucks are the backbone of any major municipal fire department and while there have been major advances in construction, the role of these apparatus has remained the same.

The triple-combination pumper remains the workhorse of the fire department with its pump, water tank and selection of hoses. The pumpers of the 1950s had an 800-gpm pump that operated off of a transfer case attached to the truck's transmission. A couple of these pumpers still exist and could still pump hundreds of gallons of water if put to the test. Today's CFD pumpers are top-of-the-line CAFS pumpers that can pump upwards of 2,000 gallons per minute.

The pumpers of the 1950s were the sedan-style, 70th anniversary Seagrave pumpers with very recognizable grills. These trucks were nice to look at and took care of business. The cab design also started to address firefighter safety. The operator and officer sat in the front of the truck, as with any previous vehicle, but the other two members of the crew sat facing backward, protected by the cab as well. Access to the rear seats was through a walkway that split the hose bed. The pump in the truck was a single-stage, centrifugal pump that pushed 800 gpm through the hoses. The water tank carried 300 gallons of the wet stuff for quick extinguishment of any small fire and the truck carried more that 1,000 feet of 2.5-inch (65-millimetre) hose to connect to the hydrants for larger blazes.

Calgary continued to use the relatively small pumps, by today's standards, until the mid-1970s when the city purchased Hendrickson Super Pumpers from Superior in Red Deer. These pumpers delivered more than twice the amount of water and had big diesel engines to power those pumps. The new trucks also had more compartments for the equipment that pumper crews were beginning to use. They were also the first of the lime-yellow apparatus to grace city streets. Throughout the 1970s and into the 1980s, Calgary bought more of the Super Pumpers and started to buy International Cargostars for use as pumpers. The Super Pumpers have been out of service for about six years but two Cargostars remain in a reserve role in the department's fleet.

In the 1990s, the department began buying custom cab apparatus, the first a Pierce Arrow. Pierce Dash chassis were next, and then, when Superior was bought by Emergency One, the department began receiving E-One Cyclone II chassis with their pumpers. The last of the lime-yellow apparatus was delivered in 1994 and in 1996 the first white-over-red truck was delivered and stationed at fire headquarters.

The pumpers that Calgary has bought recently have come on Spartan Gladiator chassis with Waterous pumps and compressed-air foam systems, 550 gallon tanks, 1,000 feet of three-inch (77 millimetres) hose and 1,000 feet of five-inch (125 millimetres) hose. These monstrous rigs have room inside the cab for five firefighters along with an enclosed pump panel so the operator can run the pump while out of the elements. The pumps on these trucks are huge, and more than double the pumping capacity. These pumps also include many electronics and the addition of air and foam to the discharge side.

Compartment space and the equipment carried on pumpers have varied greatly over the past 50 years. Pump crews in the 1950s primarily put the wet stuff on the red stuff but the job of the engine has evolved into a multi-functional role. Nozzles, adapters, hose and ground ladders are still found on the pumpers but now a variety of hand tools, hazmat cleanup equipment, fans and medical equipment can be found in the compartments. Some of the trucks even carry small hydraulic combination tools for vehicle extrication.

For the most part, vehicle extrication and all types of rescues are handled by the city's five emergency rescue units and one heavy rescue unit. In 1951, a new rescue car, donated by the Associated Canadian Travelers at a cost of $7,900 was put into service. This truck spent more that 20 years responding to all types of rescues. It was replaced in 1963 by a larger piece of apparatus that was painted white. In the 1970s the department expanded its rescue role to place five new trucks into service as emergency rescue units. Four of these trucks were similar in body construction while the fifth was a "bread truck" style with a tailgate that raised and lowered.

This fifth truck was placed downtown at No. 2 station and was operated as a high-rise truck. Equipment inside this truck was on hand trucks that were easily moved into high-rise buildings for use on incidents. In October, No. 2 received its new Spartan/SVI rescue. Unlike the other new rescues that Calgary began to take delivery of in 2006, this truck has an extra transverse compartment that holds all of the high-angle equipment. The features of this and other rescues delivered include remote control light tower, slide out/drop down equipment trays and pre-connected Holmatro hydraulic tools.

The only rescue in the city that is more than two years old is No. 9 heavy rescue, which is built on an E-One Cyclone II chassis. The body on this truck was designed with the help of members of Calgary's heavy rescue team and built by Inter-continental truck bodies of Coaldale, Alta. This truck and the firefighters who staff it are part of Canada Task Force 2, along with a support vehicle that carries all of the cribbing needed for heavy urban search and rescue.

Supporting Calgary firefighters in the air for the past 50 years have been a number of different aerial apparatus. At the end of the 1940s, a German-built Magirus wood/steel ladder was replaced by a 1948 Seagrave 85 steel aerial. "Silver Bell" as it's affectionately known because of its large officer-side bell, is still owned by the Firefighter's Museum Society and was fully restored a few years ago. The Magirus that it replaced is also in the FMS fleet and the truck that preceded it as well. That truck, a 1959 International LaFrance, was still a reserve piece of equipment for the department into the 1990s. Throughout the 1960s, '70s and into the early '80s, Calgary used International cabs and chassis with varied body work with the only exceptions being two Scot/Pierreville ladders. Towards the end of the 1980s, aerials were delivered on Pierce Dash chassis with body work by Superior and Smeal 30-metre ladders. Then, as with the pumpers, when E-One bought Superior, a couple of aerials came on the Hurricane chassis. The department stayed with Smeal aerials and continues to use them. Calgary's first aerial with a pump was delivered in 2004 and was also the first ladder platform truck to be used by the city. This was not the first aerial apparatus with a platform for firefighters to work from. That honour went to the 150-foot Calavar Firebird placed onto a Hendrickson chassis. This truck, delivered in 1976, was in service in the city for 20 years and proved to be a valuable asset at many large blazes.

In 1996 the ‘Bird' was replaced by the city's first dinosaur, a 167-foot Bronto built on a Hurricane chassis. The addition of two 117-foott Brontos on Cyclone II chassis and another straight stick on a Spartan chassis have lowered the average age of the aerial fleet considerably in the past couple of years.

Other apparatus such as tankers, bush buggies, hazmat trucks, aquatic rescue vehicles and boats have been added over the past five decades.