Features Leadership
Feature: At the Helm

Fire Chief Cynthia Hammond didn’t have to take her focus off the firefighters making entry during her first significant structural fire as the chief of Inuvik, N.W.T.’s fire department for one second. She trusted that her pump operator knew what he was doing. She knew the water was coming. 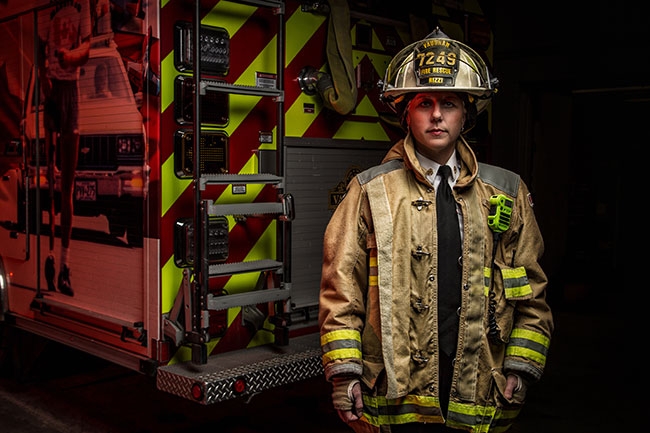 “It was in that moment I realized my team and I had achieved a milestone within the department,” she said. “Trust.”

Hammond is one of several female fire chiefs who’ve headed their departments for roughly a year.

She and Fire Chiefs Deryn Rizzi of Vaughan Fire and Rescue Services (VFRS) in Ont. and Lori Hamer of London Fire Department, also in Ont., agree on one thing – that trust is vital to any department’s success.

■ leadership
“You have to trust your team. I was confident that the firefighters inside were capable and they would keep each other safe. They did not question my orders. On the outside, I didn’t have to look back to know essential tasks were being done. I trusted that all our training and time spent together paid off,” said Hammond.

Rizzi is another chief who knows just how important trust and learning teamwork is as leader of a large urban fire department in southern Ontario.

“I am constantly learning, re-evaluating and reinventing myself as a leader; and I learn from successes and challenges that I face,” she said. “Changes in our department or in the corporation requires change in yourself as a leader, so it is appropriate and necessary to step back, evaluate your viewpoint and figure out how you can take yourself and your team to the next level collectively.”

Chief Hamer in London said she believes she is Canada’s first female fire chief that does not have any fire-suppression experience, but that fire suppression is not the only necessary form of experience needed to lead a team. Her education in family and social relations has helped her lead her team effectively over the last year.

“Our biggest resource is our people,” she said. “I had the opportunity last year to get out to the stations and visit a lot of our crews.

“It was important to find out what they’re thinking and hoping for, and even just to get their input on a variety of topics.

“That’s been probably the best part of the last year. Getting out and meeting staff. So many people think the fire department is just the big, red truck, but there are many people working to keep the community safe and it’s one big team effort.”

■ background
Hammond jokes that she joined the volunteer fire service in 1996 for “stress relief” while working in the field of brain injury rehabilitation. She served the community of South Gillies, near Thunder Bay, Ont., progressing through the ranks and culminating in her role of deputy chief in 2005. During that time, she also travelled to many communities in the far north of Ontario delivering fire training as an associate instructor with the Ontario Fire College.

Her full-time career began in 2005 as a program specialist and training officer with the Ontario Office of the Fire Marshal, prior to serving the Chippewas of Rama First Nation’s Fire Rescue Service as a fire training officer in 2016.

In 2017, when her daughter moved on to university, Hammond realized it was time to expand her horizons. She had a map of Canada and a dart. Then she found a job opening for the fire chief position in Inuvik.

“It was an ideal opportunity, I could explore Canada, continue in a career I enjoy and work with individuals dedicated to serving a very unique community,” she said.

Rizzi, meanwhile, started with VFRS in 2001. She worked her way up the ranks, competing in an acting captain promotional process which included a tactical/practical, written exam and an interview. Rizzi worked in that role and then competed for a training officer position and moved into the training division.

“Then I went back to the trucks,” she said, “and eventually earned the position as a captain. I spent most of my career as a firefighter serving the community in technical rescue halls; from rope rescue, hazmat, rescue squad and technical rescue crews. That is where my interest and passion for technical rescue originated. I was only in the role of a captain for three months when the deputy position was posted. My former platoon chief was the one who suggested I compete.”

“Coming up through the ranks I had an incredible vested interest in what the future of VFRS would look like,” she said.

Hamer started her career in the fire service as a 911 operator in Kitchener, Ont., in 1998. She worked her way up the administration side of the service and became chief during a time in her department when allegations of workplace harassment concerns had arisen. She did not ever imagine herself as fire chief.

“I studied family and social relations at the University of Guelph. That helped me become the person I am. Then I went to Ryerson University for public administration and governance. I’m Currently at Queens (University) in the executive leadership program.”

■ 2018 Highlights
Hammond said she prefers to collaborate with her team as a leader and trainer. Creating an environment in which individuals are empowered was one of the highlights of the last year for her. Individuals brought strengths from outside the department that needed to be recognized and capitalized to grow the department. It took some adjustment.

“I hear my team members say, ‘So you’re going to listen to our suggestions, and you’re not going to be looking over my shoulder every time I do something?’ And I say, ‘No, no, of course not.’ Again, it comes back to trust,” she said.

Rizzi said a highlight for her was that VFRS received 100 per cent in the city’s 2018 satisfaction survey.

“That can be attributed to all members of the team; firefighters, fire prevention inspectors/investigators, communications operators, training officers, mechanics and clerks, for the vital role each member plays in keeping our community safe.”

Hamer said one of her biggest highlights in 2018 was seeing and feeling change in the culture of her workplace.

“There were opportunities to improve the culture in the  London Fire Department and that’s partly why I try and visit all the stations and all the divisons to gather feedback and input,” she said. “I’m starting to see a culture shift which is very exciting. It takes a long time. It takes work from not only management but all team members.”

■ Diversity and Inclusion
2018 was a year of many firsts for several Canadian fire departments, but it was also the year the Canadian Association of Fire Chiefs (CAFC) saw its first elected female board member, Keri Martens, who was elected in September 2017.

Martens currently serves as deputy fire chief of Canmore Fire Rescue in B.C. Previously, she was fire chief in Lake Louise. Last year was her first full year as a board member on the CAFC. She has several roles and responsibilities, but has spent a majority of her focus on the new diversity and inclusion committee. The focus of 2018 was on gender, Aboriginal and human rights issues.

“The diversity and inclusion committee really started through a conversation about there not being a lot of women in the Canadian fire service,” said Martens. “Honestly, we’re not even exactly sure how many there are. It’s a hard number to pin down. So, we thought we needed to do something about it. We need to know who’s here, how they got here, what their stories are, and how they’re doing in their day-to-day careers.”

Martens wanted to join the board partly because she realized the platform she had going into her new role.

“It’s been great being able to use this platform to further develop the committee and do what I can to make the service better and more available,” she said. “I’ve learned so much over this past year. We have so many allies and supporters all across Canada.”

■ Looking Ahead
When each of the four chiefs were asked, “What would you say to a young girl interested in becoming a firefighter but is hesitant due to gender concerns?” all answered similarly.

Hammond: “This would be for anyone wanting to join the fire service, regardless of gender. Prepare, so you can seize opportunities that come your way.  Be curious, so you can learn. Be fearless, it’s OK to be afraid, but do it anyway.”

Rizzi: “My message is simple; every accomplishment comes with the decision to try. Keep moving forward, opening new doors, and doing new things, and your curiosity will lead you down the path of success.”

Martens: “Follow your heart, if that’s what they feel like doing then I would encourage them to do that. It’s not an easy job and you will set yourself up for failure if you think it’s an easy way to spend your day, but I think there’s a lot we can do to make it better. Finding allies, supporting others, building up leaders.”