Features Training
Back in service: A training officer returns to the trucks to learn from recruits

In my thirteenth year in the fire service, I left my role as a training officer and returned to the fire ground as a first-class firefighter. I am now back in service and responding to calls. 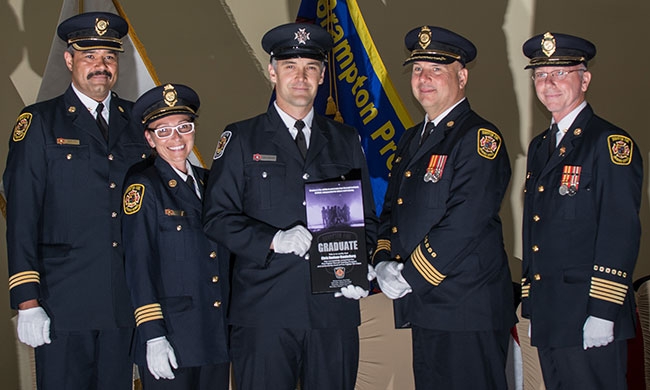 Some may perceive this move as a step backward, but trading the desk job for the familiarity of the station feels good. I recently graduated from my 16-week recruit class; not a class that I was teaching, but my recruit class. After years as a training officer, I was the student.

In 2004, I joined the Big White Fire Department in British Columbia as a volunteer. Before I could blink, I became a senior firefighter and, shortly thereafter, I was given a red lieutenant’s helmet. By 2008, I had transitioned to a paid member of our composite department, and began my full-time career as a suppression captain and fire-prevention officer, later progressing to assistant training officer. I know I surprised my chief and mentor Jamie Svendsen when I withdrew my application for the deputy chief’s position for which he had encouraged me to apply. With fewer than 10 years of fire-service experience, I didn’t feel ready. That was the first time I took a step backward. It was a good decision at the time. Soon afterward, I returned to my home province of Ontario to join the training division at Brampton Fire & Emergency Services.

“When are you writing to become a captain?” “Do you think you’ll want to be a chief one day?” “Have you thought about instructing or training?” These questions are typically heard in fire halls, and are founded in an obsession with moving up the corporate ladder. Those who become good firefighters are often encouraged to move into officer positions. We are hardwired as a society to keep pushing for the next level, to get more stripes, higher pay, more responsibility. It feels strange returning to square one instead of pushing upwards. I believe that there is value in simply appreciating that it takes a full career just to become a good firefighter, and that solid senior firefighters form the core of the industry. That being said, it takes a team to run a fire department.

My decision to go back to the trucks was based on personal circumstances. It was hard to leave my training-division colleagues; I felt as if I was leaving them in the lurch. I will be forever grateful for the compassion, understanding and support of those closest to me both on and off the job.

I tried to slip into the recruit class quietly. I ditched the uniform and wore business-casual clothes for the pre-class meeting with human resources. I was hoping to fly under the radar for a couple of weeks but it took about an hour before I was recognized by a fellow recruit. By lunch on that first day, the other 12 recruits learned that there was a previous training officer among them. In the first few weeks, I sensed the uncertainty of my  classmates; they even joked about me being an undercover boss. I am grateful for their acceptance and inclusion.

Going through a recruit program was humbling; in many ways, I felt as if I did indeed gain the insight of an undercover boss. Here are a few thoughts about my experience.

For the record, I was afforded no favours as a recruit. I had to submit a resume, pass the Ontario Fire Administration Inc. fitness test, go through the interview process, and pick up a crateful of textbooks before I began the recruit-training program. I used the side entrance to the building like the other recruits, and parked at the very back of the  lot. Two hours before we started our training days, I would occasionally beat another recruit known as Rusty at getting the coffee ready for the training staff. No slack given, but also, none wanted.

Thirteen years in, I got the full recruit experience, or as close as it could be given the circumstances. Both me, and my fire department, will benefit. This fantastic opportunity allowed me to focus on mastering task level skills again and I am grateful to have been able to get back to the basics.