I first wrote about the issue of rapid intervention team, or RIT, 10 years ago in an issue of Canadian Firefighter magazine. But, it’s an important subject that’s worth revisiting. 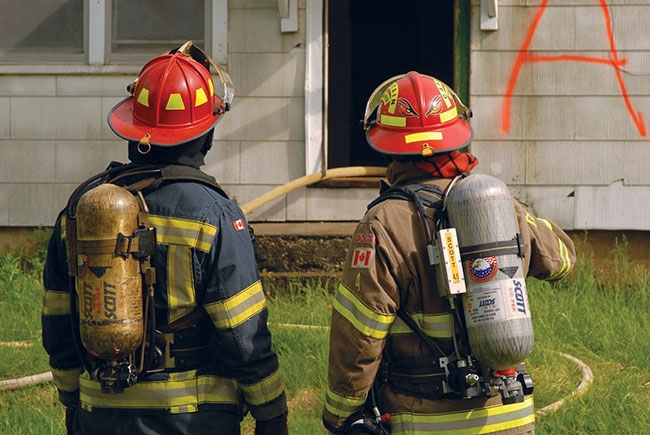 (L to R) Craig Cunningham from Mississauga Fire & Emergency Services and Matt Wherle from Grey Highlands Fire Department during RIT training. The concept of rapid intervention teams is not new. It has been around for 10 to 15 years in the U.S.

The  concept of rapid intervention teams is not new. It has been around for 10 to 15 years in the U.S., but has only begun to infiltrate the Canadian fire service in the last five years. What was once a trend is now a standard practice, with many fire departments implementing some kind of RIT program.

We have now adopted rapid intervention teams into NFPA standards such as:

The Ontario Ministry of Labour’s Fire Service Section 21 Advisory Guidance Note 6-11 (35) also addresses the idea of establishing and using a rapid intervention team. But, the question is, who are they, really?

NFPA 1410: Standard on Training for Initial Emergency Scene Operations (2005) defines RIT as, “two or more firefighters assigned outside the hazard area at an interior structure fire to assist or rescue at an emergency operation.”

The Rapid Intervention Teams (R.I.T.) can either be:

The standards tell us what a rapid intervention team is and when to use it, but they do not specify the minimum standard to which RIT members should be trained.

At any typical structure fire, most fire departments will assign at least two people to be the initial RIT team. The initial RIT team will gather what it can for equipment and will stage at a location near the structure or by the incident commander (IC). The two people (minimum number) who have been assigned to be the RIT team will be chosen by the IC in order to fulfill legislative requirements, as in Ontario’s Section 21 Guidance Note 6-11, that, “The employer should provide written operational guidelines for establishing rapid intervention crews/teams of at least two firefighters to rescue firefighters in circumstances where there is the potential to become lost or trapped. The potential to become lost or trapped can occur at emergencies such as interior structural fires, confined space rescues, high-angle rescues etc.

The question is whether firefighters assigned by the IC to the RIT team are the firefighters we really want  to be our rapid intervention team. Are they trained to locate and rescue a downed, lost or trapped firefighter? This is the question that must be answered.

A few years back, I was visiting a department in Ontario and asked firefighters who were on duty that day about their RIT capabilities. Did they train on RIT techniques?

The answer I received was astonishing in that they treat a firefighter rescue the same as a civilian rescue. This is a big misconception and also a common occurrence among fire departments. Given the fact that all firefighters are trained to rescue civilians, why not assign just any one firefighter to be on the RIT team? Presumably, they have the tools and knowledge for rescue if they are already trained in civilian rescue.

Another city fire department I worked for had a standard operating policy on RITs. It stated the minimum standards as based on the Section 21 Guidance Note. We were dispatched to a reported structure fire and were the fourth engine company due in the first-alarm assignment. Once we arrived on scene, we were assigned to be the RIT. We grabbed what equipment we needed as per the SOP and sat by the IC.

While waiting, I asked my captain if we should do a complete 360 of the building. He said that wasn’t necessary because the guys inside were almost done. I then asked if we should ladder the second-storey windows to provide a secondary means of egress for the crews and to provide a quick means of entry for the RIT. Again, the answer was, “No,” because it was not needed. If the SOP did not state what to do at the scene, then it did not get done.

To be a rapid intervention team firefighter requires special training and emphasis on many subjects.

We were denoted as RIT members by wearing orange balaclavas and we had orange RIT stickers on our helmets. By wearing these items, any officer could quickly identify who was RIT-trained and who was not, which was beneficial on the fire ground.

The fire department belonged to an organization called ABBETRIT, an association comprised of three counties that shared in RIT responses for mutual aid. Part of the mandate was to train firefighters in rapid intervention techniques.

Following is a breakdown of the training that would be beneficial for RIT firefighters. (Note that the amount of time devoted to actual RIT techniques is only 36 hours.)

I had the privilege when working in Pennsylvania to be under the tutelage of James Crawford, who at the time was assistant fire chief of the Pittsburgh Bureau of Fire. He is regarded as the godfather of RIT and was instrumental in the training and development of hundreds of RIT-trained firefighters. He had the experience of locating and recovering fallen brothers in the City of Pittsburgh at the Bricelyn Street fire in 1995. He will tell you that it takes well-trained firefighters in rapid intervention techniques to rescue firefighters.

While at Cranberry Township, we responded to an auto-body shop fire one night as the dedicated RIT team. As soon as we were on site, we were deployed to locate a missing firefighter. The front wall of the shop had blown out and when a PAR check was conducted, one firefighter could not be accounted for. Within minutes, we had located him and he was taken to hospital for evaluation.

Our quick rescue was a result of our training. We were trained to locate and rescue firefighters in distress and that night it paid off. I can recount numerous other times when we responded as the dedicated RIT for other mutual-aid structure fires and, even though we were not deployed, we were ready because of our training.

Personnel in the other fire departments asked themselves if these were the guys they wanted as their RIT team. They knew the answer.

Do you know yours? Is this the same question you will ask when it comes time to establish your RIT team?

Mark van der Feyst has been a member of the fire service since 1999 and is a full-time firefighter in Ontario. Mark teaches in Canada, United States and India, and is a FDIC instructor. He is the lead author of the Residential Fire Rescue book. Contact Mark at Mark@FireStarTraining.com.