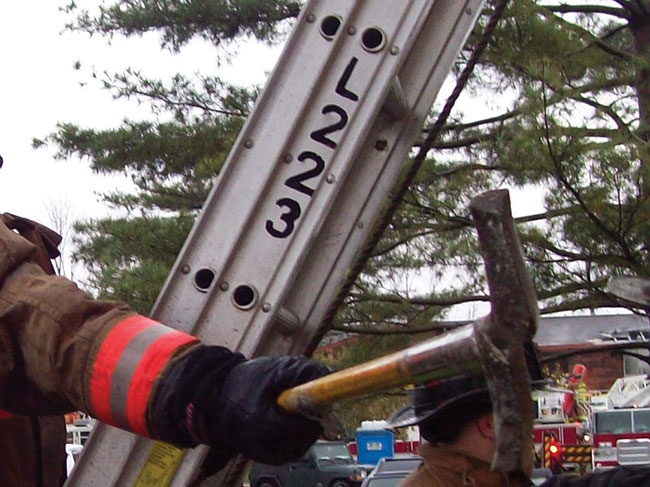 The first step of a successful single firefighter ladder throw is to mark or identify the middle of the ladder. Photos by Mark van der Feyst

When we have fewer hands to help, we must find ways to be effective and efficient with limited manpower – this may mean that we have to work by ourselves for certain tasks to be accomplished. The idea of single firefighter assignments or tasks may go against the grain of what we have been taught for numerous years; to always work in pairs (at a minimum), but it can sometimes be a reality.

But, is this safe? I believe it is. This question can be debated in great detail with both sides making strong arguments but for this month’s article, we are going to look at a single firefighter assignment or task that is relatively safe and easy to accomplish: the high shoulder ladder throw.

This operation can be accomplished by any one firefighter – be it the driver, the pump operator, the first firefighter of a two-man team, the officer, etc. It is a task that any one person can accomplish with ease. Laddering a building needs to be a single firefighter assignment. This is where we need to divide our available manpower on scene with the tasks that need to be accomplished. Laddering a building is a safety point for both the firefighters inside as well as for the occupants that may need to be rescued, more so for our benefit. This does not require two firefighters to do. That is going to be a waste of manpower for the incident commander.

The high shoulder ladder throw is perfect for newer fire trucks, which are manufactured with a ladder compartment or a ladder rack that folds down. Traditional static ladder rack positioned on the side of the truck, also presents the ladder at shoulder height. Whenever the ground ladder is positioned at a height well above the shoulder, it will not be beneficial for any type of operation as it will take a long time to just get the ladder off the truck. 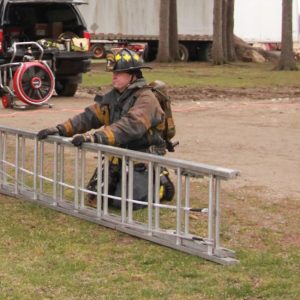 The halyard needs to be tied in a manner that will allow one firefighter to raise and extend the ladder without having to untie it. Photos by Mark van der Feyst 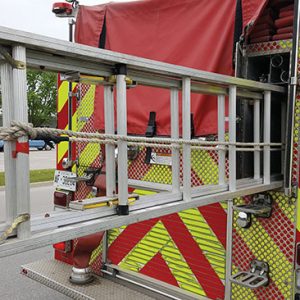 The firefighter must always consider the orientation of the ground ladder on the truck. 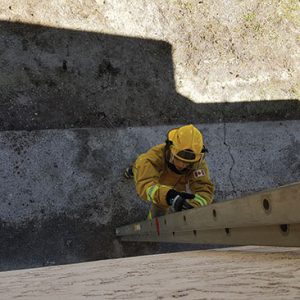 The firefighter can easily raise the ground ladder and extend the fly section easily using one or two hands. 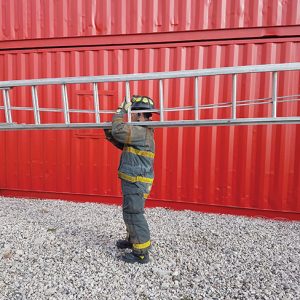 To pull off the high shoulder load throw, the ladder needs to be completely on top of the firefighter’s shoulder.

The second item to consider is the halyard—it needs to be tied in a manner that will allow one firefighter to raise the ladder, and then extend the ladder without having to untie the halyard. This can be accomplished as shown in Photos 2 and 3. The halyard is tied around the bottom rung of the bed section using a clove hitch and stays that way always. When it comes time to extend the fly section of the ladder, all you must do is pull on the halyard and up goes the ladder.

The third item to consider is the orientation of the ground ladder on the truck either in a compartment as shown in Photo 3 or on a ladder rack. The ground ladder must be orientated bed section to the firefighter. This allows them to pull the ladder out from the compartment to the mid-point of the ladder, then place their shoulder underneath the bottom beam of the bed section at the mid-point and walk the rest of the ladder away from the truck. It also allows the one firefighter to raise the ground ladder and able to extend the fly section easily with one operation using one or two hands with the halyard facing them as shown in photo 4.

To pull off the high shoulder load throw, the ladder needs to be completely on top of the firefighter’s shoulder as in photo 5. This will mean getting use to balancing the ladder on your shoulder with the ladder in this orientation. The firefighter will have to use their one hand to hold the rung of the ladder while freeing up the other hand to carry some hand tools if necessary. If both hands are available, they can both be used to hold the ladder rungs while carrying it.

Bringing the ladder back down is the opposite of it going up. The learning curve for each firefighter allows them to identify when to put the mid-point of the ground ladder on their shoulder to, once again, shift it completely on their shoulder with ease.

Mark van der Feyst has been in the fire service since 1999 and is currently a firefighter with the FGFD. He is an international instructor teaching in Canada, the United States, FDIC and India. He is a local level suppression instructor for the Pennsylvania State Fire Academy and the lead author of Fire Engineering’s Residential Fire Rescue book and other DVDs. He can be contacted at Mark@FireStarTraining.com