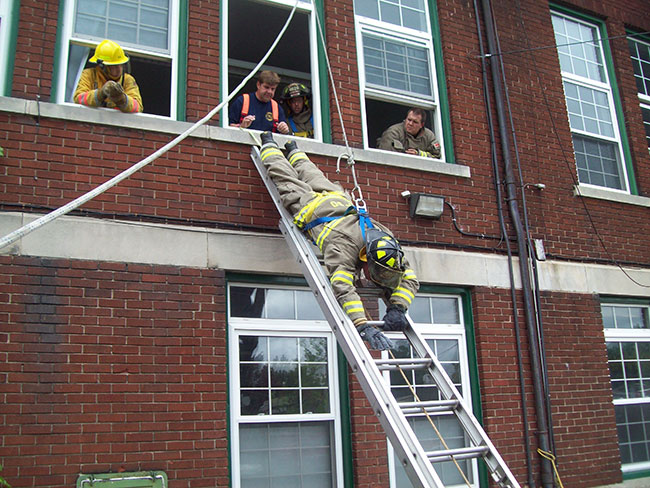 In this training exercise, notice the ladder tip – it is at the bottom of the windowsill. This allows for quick and unimpeded egress for the firefighter. Photos by Mark van der Feyst

In the previous Back to Basics, we looked at the issue of setting the ground ladder at the proper climbing angle and the different facts surrounding not having the exact 75-degree angle set. It will be fitting for us to carry on our discussion with looking at ladder tip positioning when raising the ground ladder.

In my Back to Basics column, I try to write from the realism perspective and not from the textbook perspective because we apply our skills in a realistic manner, not in a textbook manner. In our textbooks, we have a chapter dedicated to ground ladders – a very comprehensive chapter. It details everything about the ground ladder, including setting positions for the ladder tip.

We have been instructed to position the ladder tip at different places depending upon what task is being accomplished — ventilating a window, applying water in a window from a hose line, rescuing an occupant from a window, and gaining access in through the window (both single and double wide windows). All of these different tasks require the ladder tip to be placed at a different position on the building in relation to the window. These are the basic ladder tip positions that we teach our new recruits based upon the textbook, which is a good foundation to build on.

The best position that a ground ladder should be set to is with the ladder tip at the bottom of the windowsill – all the time, every time. In order for us to understand this, we have to first answer the question of why we are laddering the window in the first place. There are two main reasons — access and egress. The access portion involves the rescue of the occupants from inside the building, venting a window, or spraying water into the building, whereas the egress portion involves firefighters needing to get out of the building quickly.

When firefighters need to exit a building quickly, it is a life and death situation. Either they stay where they are and die, or do something and get out and live. The “doing something” might involve doing a headfirst ladder dive – if there is a ladder at that window. In Photo 1, you will see a training exercise taking place where a firefighter is practicing this technique. Notice the ladder tip – it is at the bottom of the windowsill. This allows for quick and unimpeded egress for the firefighter. If the ladder tip were off to one side of the window, or above and to the side or even a rung or two inside the window, the firefighter will not be able to exit quickly, it will be impeded.

There is a good video showing a firefighter and officer exiting a house bedroom window in an effort to get out ASAP – they get caught up and slowed down because the ladder tip is raised one rung into the window and above the windowsill. Had the tip been dropped down below the sill, there would not have been any issues.

For gaining access to the building, the ladder tip at the windowsill will work for all tasks assigned.

By standing this far down on the ladder, they are out of the direct path of the falling glass. It also keeps the firefighter’s head even with the windowsill which protects them from the hot gases exiting once the window has been vented. This is also the first action step in Vent, Enter, Search tactic being conducted if the need arises – the ladder tip must be at the windowsill for this to work.

For the heeling firefighter, if they are standing behind the ladder, they are going to get glass on them – but if they are heeling from the front, they will not. We will discuss this further in an upcoming article.

To apply water into the building through the window, the same action steps can be duplicated as above. The firefighter is protected from the exiting hot gases and steam while at the same time being in the lower cool zone of the flow path (unilateral or bilateral).

The most important task that we need to accomplish in gaining access to the building is for rescue. Removing an occupant from their bedroom or from a second or even third story room requires the ladder tip be at the windowsill. This will provide no interference with the passing out of the occupant onto the ladder into the firefighter’s arms. This is the one main reason why we ladder buildings – laddering for life.

Imagine setting up a ladder to vent a window as the textbook calls for only to then having to execute an occupant rescue? This would require the firefighter to climb down the ladder so that they can reposition it for the rescue. How much time would this take? What if this were you needing to be rescued – would you want this extra time to be taken so that you can be rescued? I would hope that your answer is no, you would not. Then ladder the building with the tip always at the windowsill.

Mark van der Feyst has been a member of the fire service since 1999 and is a full-time firefighter in Ontario. Mark teaches in Canada, United States and India, and is an FDIC Instructor. He is the lead author of the Residential Fire Rescue book. Email Mark at Mark@FireStarTraining.com.