One problem area is our listening skills. Active listening is a skill that needs to be exercised when using any type or brand of portable radio. Photos by Mark van der Feyst

A very common problem in the fire service is our communications. Whether it be with the infrastructure of the system, the type of portable radios that we use, or other aspects, it always seems to be a never-ending problem.

In any LODD report issued by NIOSH, a common suggestion listed to avoid repeat instances is to address, fix or revise the communications system that was being used. Sometimes the system is too overburdened for the department – too many radios in use at once for multiple calls and too few channels available for dispatch. Sometimes the system is too antiquated and requires an overhaul from top to bottom.

After a while of being exposed to these issues, the firefighter can begin to view their poor communication behavior as normal. The firefighter becomes desensitized to the proper ways of communicating and sticks with the bad habits that prevail and contribute to these systematic failures.

One problem area is our listening skills. Active listening is a skill that needs to be exercised when using any type or brand of portable radio. There is much chatter that takes place over the portable radio and sometimes people miss key information or being called by someone else. Distractions can certainly occur on the fire ground which will cause a person to not be listening actively.

When the Incident Commander is bombarded with calls on the radio as well as firefighters wanting face-to-face time, it’s very easy to miss some of the radio chatter. On the flip side, when the firefighter or officer is intently focused on a certain task or issue, they tend to block out or not hear the radio and will miss key information or being called by Command.

Active listening requires intently listening to the radio – it is devoting your full attention to hearing what is being transmitted over the airwaves. Officers assigned to a crew, accountability officers/ISO and RIT teams need to be actively listening to the radio, as well as pump operators/drivers, so that they can support interior crews with things they need before it is asked for by Command.

Missing information is another area that creates challenges. This is where the user transmits a message but does not include all the information. This can be due to not thinking about what needs to be said prior to transmitting, or from improper keying of the radio which cuts out parts of the message. The latter is the more common mistake made by most users – they start speaking too quickly before keying the mic or they cut themselves off before finishing.

A good rule to remember is key 1-2-3; key the mic, then count 1-2-3, then start speaking. This will ensure that the entire message will be captured and transmitted.

Excess chatter on the radio contributes to problems. There are individuals who love to talk on the portable radio. Every chance they get, they will key the mic and send a message across. Sometimes the message they are sending is not that urgent, important or relevant to the situation. Yet the message gets transmitted anyhow, tying up the radio from others who need to send an urgent message or request. 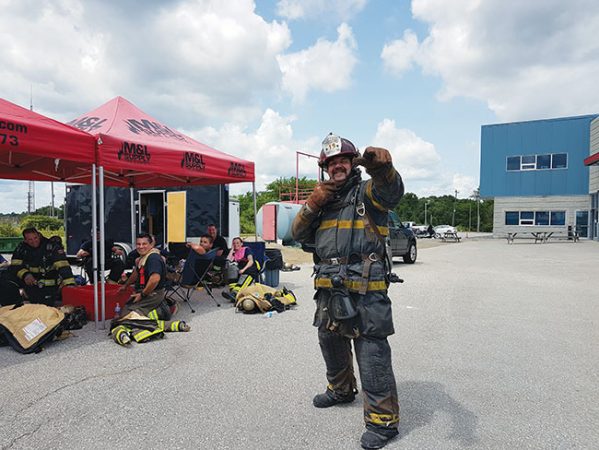 A good rule to remember is key 1-2-3; key the mic, then count 1-2-3, then start speaking. This will ensure that the entire message will be captured and transmitted. Photos by Mark van der Feyst

There needs to be restraint when it comes to using the portable radio. Firefighters and officers need to learn that the portable radio is not a personal DJ radio mic; it is a lifeline for each person who has one with them.

For those people who are prone to abuse the portable radio, perhaps removing the device from them is the best solution – it will show them that they need to exercise restraint when using the radio while at the same time freeing up the air time for the remaining members who need it.

The last problem area is lack of control while using the portable radio. Unlike the previous point above, this has to do with the practical operation of the portable radio. There are certain ways that we need to hold and use the portable radio and mic in order to transmit properly. Doing so allows the message to come across clearly so that it can be understood by everybody.

Whenever the radio and mic are not held in the right position, the message becomes distorted. Distortion can occur when the mic is held in front of the regulator on the SCBA, when it is held directly in front of the person’s mouth and their lips are touching the mic and when the person is yelling into the mic at high volumes.

The proper use of a portable radio mic is to hold the device at a slight angle away from your mouth about two inches – this will allow for clear and concise communications. If the firefighter is wearing a SCBA face piece, he should place the radio mic directly on the lens of the SCBA to transmit the message. It will come across very clear on the other end. Some SCBA manufactures will have integrated communication systems for the portable radio, but when they fail, you will need to default back to the basics.

Mark van der Feyst has been a member of the fire service since 1999 and is a full-time firefighter in Ontario. Mark teaches in Canada, United States and India, and is a FDIC instructor. He is the lead author of the Residential Fire Rescue book. ContactMark at Mark@FireStarTraining.com.