New Dundee arrived within five minutes of the alarm 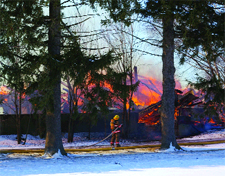 At approximately 1100 hours on Saturday, March 4, 2006, a call for a barn fire was dispatched to the New Dundee station of the Wilmot Township Volunteer Fire Department in southern Ontario. District Chief Brad Otterbein, upon receiving the alarm, looked in the direction of the countryside address and saw a significant amount of smoke in the sky. He immediately asked dispatch to activate additional volunteers and trucks from Wilmot’s Baden station, as well as the New Hamburg station’s tanker.

PHOTO BY TERESA BROWN
Waiting for the charge, a Wilmot Township firefighter stands ready to deploy a hose stream on the barn, which has already collapsed.

New Dundee arrived within five minutes of the alarm and staged on the road, as the laneway was too confined for the apparatus. The barn, empty except for several round bales of hay, was already fully involved and clearly lost. Luckily, wind direction was to the south and away from other buildings. With water supplied from continually refilling tankers in a shuttle and a nearby neighbour’s pond, firefighters worked for six hours to successfully contain the blaze to the barn.

New Dundee volunteers remained on scene for a total of approximately 12 hours to extinguish flare-ups on the site. The cause of the fire is unknown.