An Ontario city is testing an early-warning system that allows in-transit emergency vehicles to broadcast a warning to nearby cell phones.

"It's an audible, verbal message, with the segment of a siren to begin with," Newman explained. "They can choose whatever message is appropriate to the situation."

Belleville Fire & Emergency Services and local police are participating in the pilot.

Fire Chief Mark MacDonald confirmed seven of the department's vehicles have the app – four front-line trucks and three squad vehicles. Volunteer firefighters were also encouraged to download the app for use during emergency calls.

"The nav systems in vehicles are all blue-toothed and programed for this kind of information input," MacDonald said, "so it seems like a very logical step to say, 'How about letting people know that emergency responders are coming.'"

The BRAKERS system is user-friendly for vehicle operators, MacDonald said, who are used to adjusting emergency lighting and task lighting when they get to a scene.

A programmable message – such as, "Volunteer firefighter approaching, please permit them to pass" – broadcasts on a loop with the press of a button.

The challenge, Newman said, is in convincing people to download the free app, and soliciting feedback. By mid-October, the combined downloads were approaching 1,000.

"I have several different marking things in mind to get people more involved," Newman said.

MacDonald, too, said it's hard to gauge success of the system without hearing first-hand accounts from app users.

In his view, the warning system holds the most potential for volunteer firefighters who often get tied in traffic when responding in their personal vehicles.

"The green lights have been in place for 25 years and people are still asking, "What are those green lights?'" MacDonald said. "We're hoping with this app it might bring an awareness level to people and make them think of it."

The pilot in Belleville runs until Jan. 1. 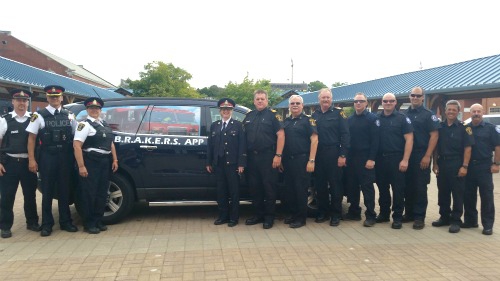 Police and firefighters in Belleville
Print this page