As a professional in the fire service, you make crucial decisions every day that balance need with available resources. How should you approach these decisions, and how can you justify the decisions you make? 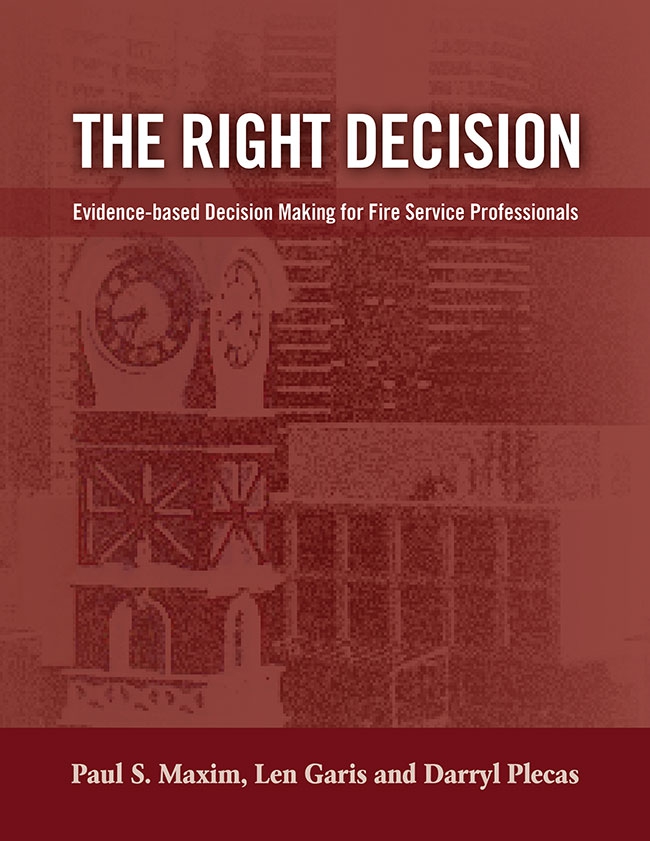 he Right Decision: Evidence-based Decision Making for Fire Service Professionals by Paul Maxim A new book on evidence-based decision making in the fire service provides chiefs with a step-by-step guide to justifying requests for training and equipment in the face of evolving technology and budget constraints. By Karin Mark

In the new manual The Right Decision: Evidence-based Decision Making for Fire Service Professionals, authors Paul Maxim, Len Garis and Darryl Plecas explore the what, why and how of evidence-based decision making.

All three authors bring extensive research and industry background to the topic: Maxim, a professor in the department of economics and Balsillie School of International Affairs at Wilfrid Laurier University, is a well known researcher in the area of criminology and other topics; Garis, an adjunct professor at the University of the Fraser Valley (UFV), and fire chief for the City of Surrey, focuses on addressing public safety challenges through evidence-based decision making and innovation; and Plecas, professor emeritus and former head of the UFV’s school of criminology and criminal justice, is a renowned researcher and authority on public safety and criminology issues.

“The public and municipal leaders understand the value of fire services, but more and more, they are asking that significant decisions be based on hard evidence,” Maxim said. “Gone are the days – if they ever existed – where government and taxpayers take a request for more equipment or personnel at face value. Evidence-based decision making is the key to navigating this new reality.”

Published in March 2014, The Right Decision strips evidence-based decision making down to the basics, providing senior fire officials with an effective tool to help them justify a particular approach or choice.

Readers are guided through the process of finding and using the information needed to make evidence-based decisions, and then positioning their decisions in a way that will convince others of their merit. Fire service examples sprinkled throughout the chapters help to link the concepts to the real world.

The authors make a strong case for taking an evidence-based approach to making decisions, pointing out that policies and programs that are not guided by sound evidence frequently cost too much, waste resources and yield poor or unknown results. As well, those in charge of approving fire department budgets may not support requests that lack compelling evidence.

On the other hand, evidence-based decisions often produce better results, which can increase a department’s credibility and support.

The manual traces the origins of today’s evidence-based approaches back to the 1980s, when the government of the United Kingdom, faced with significant financial challenges, started to emphasize the need to support policies and best practices with hard data and research. It was felt at the time that decision makers were wasting resources by basing their decisions on personal preferences, traditional practices and trendy ideas.

The resulting evidence-based approach influenced many other fields, including the health sciences, a field in which researchers could directly link poor practices to increased levels of harm for patients. But in trying to apply the research to improve outcomes, health-care practitioners encountered numerous challenges, including trying to shift entrenched attitudes and behaviours while staying current with the latest research, creating change in the face of evolving technology and budget constraints, and inspiring system-wide support for a new vision.

Ultimately, the emerging lesson was that despite the obstacles, things can be improved. We need to recognize that improvements will come over time through a succession of actions, but we should not wait to solve everything to improve some things. We should also be modest and realistic about our insights and abilities.

Most of all, nothing will change in the absence of informed action – which is where evidence-based decision making comes in.

These universal lessons about evidence-based approaches can be applied to the fire service or any other field, the authors say.

■ Chapter summaries
Defining the problem – A well-articulated problem is critical for good decision making. This chapter discusses identifying an issue, developing options and generating alternatives. An organization’s plan, goals and priorities are important for assessing choices and measuring outcomes.

Thinking critically – Formulating an argument or explanation for a decision is just as important as the quality of the information used to make the decision. Often, people will continue to argue their position even in the face of opposing evidence. This chapter outlines different types of arguments and fallacies, and provides guidance on how to prove a theory.

Collecting evidence – Evidence helps us determine the likely impact of our decisions. In this chapter, the authors discuss how to collect evidence, including environmental scans, online research, SWOT (strengths, weaknesses, opportunities and threats) analyses, and other sources of information.

Statistics – Likely one of the most misunderstood of the disciplines, statistics can be a useful and powerful tool in a decision-maker’s toolbox. This chapter shows readers how to apply statistics to making sound decisions.

Experimental designs – A piece of data means nothing until it is compared to something else. This chapter focuses on basic experimental designs that provide decision makers with the context they need to assess the data they gather.

Costing analysis – Costing studies allow us to identify the total cost of a decision and the associated benefits. In this chapter, the authors review different types of costing analyses and show how they can lead to better decisions.

■ Making good decisions
We make decisions all the time in our private and professional lives. These decisions are mostly based on what we have learned in our training, on conventional wisdom, or on traditional practices. Often, questioning common practice only leads to rediscovering the wheel.

Yet, there are many circumstances in which traditional practice and common knowledge doesn’t work – we may not achieve the results we want, or our practices lead to less-than-efficient outcomes. Despite this, humans are often reluctant to change their approaches; we become comfortable doing the same thing repeatedly, even when we are not happy with the outcome.

Evidence-based decision making is rooted in systematic study and data collection – like science – and generally leads to sound, defensible decisions. It is a transparent process, letting outsiders see and understand the foundations of a decision. And even if the process doesn’t find the optimal solution to a problem, it does help identify options and practices that do not work.

As with anything new, evidence-based decision making gets easier with practice, Maxim notes. “Knowledge is cumulative. You will soon determine the best sources of information, how to make the process more efficient and how to avoid getting sidetracked. The time put into making evidence-based decisions will always be well spent.”

The Right Decision was the result of a partnership between the City of Surrey, the University of the Fraser Valley and the Canadian Safety and Security Program. The authors are developing a companion case study book and workbook that will take senior fire officers step-by-step through the elements of the decision-making process. Both books are expected to be released through the UFV by the end of February.

The Right Decision may be downloaded for free from the University of the Fraser Valley website at www.ufv.ca/cjsr/reports-and-publications. For more information, contact Garis at len.garis@ufv.ca

Karin Mark is a former newspaper reporter who writes for publications and corporate clients, and provides graphic design and other communications services in Metro Vancouver.