Firefighters Without Borders is a Canadian-based NGO that provides donated equipment and training to departments in need. Here’s their story. 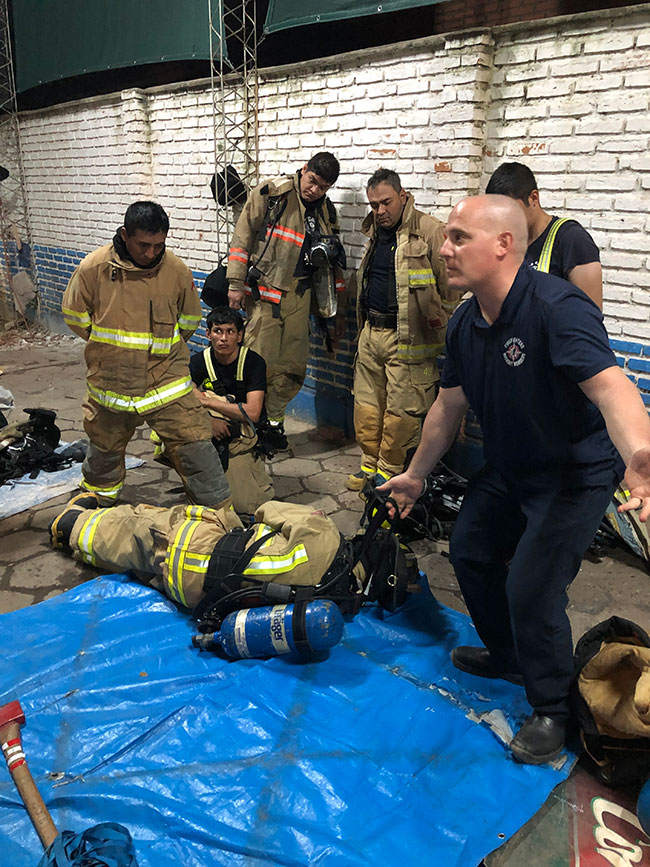 Jon Pannunzio, director of training and accreditation, travelled to Bolivia in December to provide training to local firefighters.  PHOTO: Firefighters Without Borders

For nearly 20 years, Firefighters Without Borders has donated equipment and provided training to departments in need around the world.

The organization came into existence in response to the devastating terrorist attacks on Sept. 11, 2001. Wanting to make a positive impact, several members from Station 114 in Mississauga, Ont., decided to sponsor a child through World Vision. After visiting its headquarters, the group was tasked with choosing a sponsor and ultimately chose a child from Indonesia. Sadly, two weeks later, one of the firefighters, Kevin Bailey, then 34, died unexpectedly in a rock climbing accident. To honour him, people were asked to donate to World Vision.

Then, in 2004, the remaining group learned about a fire in Ventanilla, Peru, that left more than 600 people homeless. With the same altruistic mission and Bailey in mind, firefighters Alan Hills, Tom Gojak, Andrew Melville, Aron Reppington, and Jamie Stark travelled to Peru at their own expense with World Vision’s Destination Life Change volunteer program. Before leaving, they asked other fire stations and local corporations for equipment donations. They were able to collect and deliver firefighting gear, Spanish training manuals and rescue equipment so the local department could be better prepared in the future.

The success of the first trip brought on interest in several similar projects; the organization was born. Firefighters Without Borders has since become a recognized NGO charity and have completed 25 projects in over 20 countries.

Jon Pannunzio has been the director of training and accreditation with the organization since September 2018. He is also the chief training officer for the Whitby fire department in Ontario. He explained the goal of every project is to provide a fully-operational training plan in an effort to fill gaps for fire departments that may not have the resources or tools to do so on their own.

“Our mandate is to help improve the capacity of partnering departments both in Canada and abroad, whether that be by providing training, equipment or support,” he said, referencing recent projects in Lac Seul First Nation in Ontario in November and his most recent training deployment to Bolivia in December.

“It is a true partnership in the sense that we lay out our expectations for them and then we’re pretty clear on what we’re going to be able to provide in terms of results and expectations from the crew,” he said.

Their goal—which begins with the 12-person board of directors when choosing a location and project—is to ensure they have the necessary resources to keep the training program running smoothly and consistently after the Canadian trainers return from the deployment.

This is why Frank Lamie, president of Firefighters Without Borders and retired Toronto deputy fire chief, said he initially became interested in volunteering with the organization.

“What really drew me to Firefighters Without Borders is we don’t do any disaster relief; we focus on sustainability. So, when we’re selecting a project, the main thing we look for is, after we give them equipment and go down and train them on using that equipment, whether they will be able to carry on and continue training others once we’re gone,” he said. “Our role is really to prepare them to look after their own disasters.” 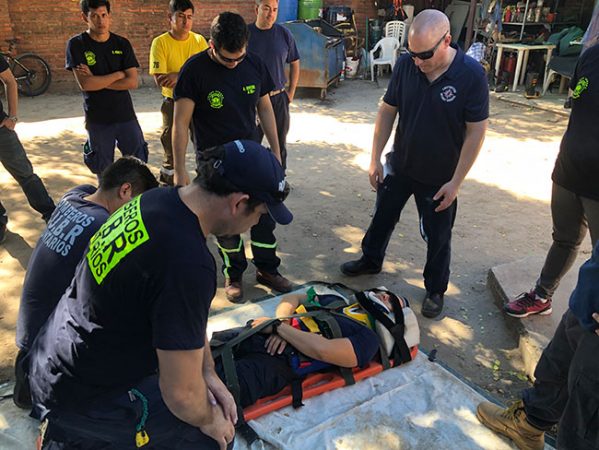 With a focus on program sustainability, trainers customize the curriculum for each department’s needs. PHOTO: Firefighters Without Borders 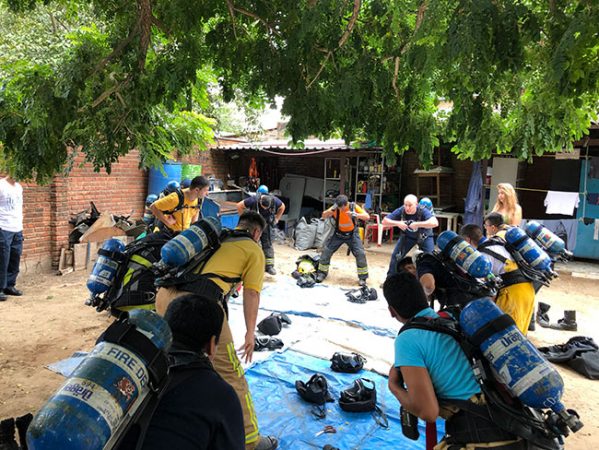 A team of trainers deploy for two weeks to conduct a train-to-trainer program with local firefighters. PHOTO: Firefighters Without Borders

After an assessment and decision is made on a project, trainers customize the curriculum and program for the department’s needs. They will then travel to the destination for about two weeks to help demonstrate various training tactics in a “train-to-trainer” model.

The organization’s latest project was set to take place in St. Lucia in May before the COVID-19 pandemic hit Canada.

The project was chosen because a variety of economic factors led to challenges in funding from many government services, leaving the St. Lucia Fire Service (SLFS) unprepared to fight major fire emergencies.

Earlier this year, Firefighters Without Borders also committed to help construct a new training facility in St. Lucia. Pannunzio said this will act as a training facility for the entire South Eastern Caribbean and will have the capacity and equipment to provide training opportunities, not only for St. Lucia, but for neighbouring countries as well. Pannunzio and a team of three trainers had planned a two-week training trip in May, but as borders closed and COVID-19 cases surged, the trip was postponed.

“The biggest thing we provide is continued support and partnerships,” said Pannunzio. “So, even though our trip has been pushed, we are in constant communications with their fire chiefs and their senior officers.”

Though the trainers do not yet know when it will be safe to travel again, SLFS has received a number of donations and deliveries on behalf of Firefighters Without Borders. They took delivery of a pumper truck on March 20, an aerial truck on June 5 and a shipment of donated equipment on April 24.

“Internationally, firefighters share the same pride and passion that we do in Canada. Every community I have worked with has welcomed us with open arms and you can see they are really grateful and committed to becoming better,” Pannunzio said. “It’s been very rewarding because it’s clear that, just like us, they want to make sure their firefighters have the best equipment and training available so, in the event of a fire, everybody comes home safe.”

Lamie also noted that anyone interested in volunteering with Firefighters Without Borders should visit the website firefighterswithoutborders.org to learn more. With warehouses in Calgary and Mississauga, those interested can volunteer to sort and test donated equipment and gear. Anyone interested in becoming trainers or taking on larger roles within the organization are also encouraged to reach out via the website to find out how to become certified and, once borders reopen and travel is again freely permitted, aid in upcoming missions.

Breaking down borders by overcoming cultural and language differences, Firefighters Without Borders has spent nearly two decades delivering firefighter training to departments around the world to ensure safer communities and practices.