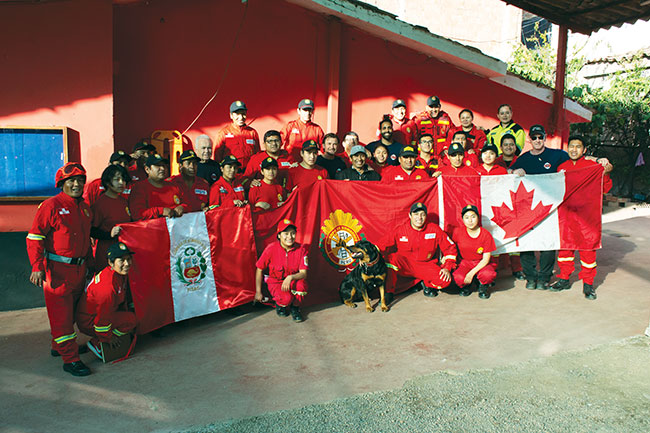 On Nov. 21, 2019, five Fire Rescue International Training Association (FRITA) members arrived in Peru to deliver fire service training programs in the town of Pisac. FRITA is a volunteer-based organization created in 2012 by a small group of firefighters from the Lower Mainland of British Columbia. With the goal of sending Canadian firefighters to instruct in developing fire departments in Latin America, FRITA matches the training needs of a host department with an instructor’s skills and knowledge. Today, FRITA has instructors from not just across British Columbia, but also from across Canada, including firefighters from Alberta, Manitoba, Ontario, Quebec and Newfoundland. Over the past seven years, FRITA has deployed instructors to Anguilla, Belize, Chile, Columbia, El Salvador, Panama and Peru with five deployments scheduled for 2020.
FRITA instructors are expected to pay for their own flights and associated travel costs while host fire departments must, when and where possible, make a commitment to provide lodging during the instructional portion and meals. While FRITA focuses primarily on training in Latin America, in 2019, FRITA instructors also deployed to two First Nations communities in British Columbia.

As part of the CBP, Peru’s national fire department, Pisac Station B- 131, in Peru’s Calca province has a compliment of 30 firefighters, 50 per cent of which are women. Pisac’s bomberos (Spanish for firefighters), are all volunteers and, in continuation of a 150-year tradition, citizens from within the community apply for a position at the station. If accepted, they must pay for the training program at their own cost.

Lead by instructor Matthew Witt (Surrey Fire Service), the Pisac team included instructors Derek Dickson (Bowen Island Fire Dept.), Norm MacLeod (Mission Fire Rescue), Keith Boswell (Justice Institute of British Columbia, Surrey Fire Rescue Ret.) and Gurjit Hundal (Vancouver Fire Rescue Services). During the previous two deployments, and while developing the training matrix for the third deployment in 2019, the team discussed implementing Incident Command System (ICS) training. In 2018, Emergency Scene Management was introduced and practiced. It was apparent that there was a need to expand on this instruction and to broaden the scope. This training would be added to a program that already included hazmat awareness, auto extraction and first aid training.

FRITA contacted Shawinigan Lake, B.C.-based FireWise Consulting Learning Academy to inquire about the possibility of obtaining Incident Command System (ICS) 100 training in for the firefighters of Pisac. Speaking with one of the co-founders of FireWise, Bob Turley, FRITA and Turley discussed the available delivery options and challenges. Delivering to a Spanish speaking audience is one challenge. FRITA normally circumvents this challenge through the use of local translators who are bilingual. During the discussion, Turley mentioned that Global Incident Command Solutions (GICS), a Calgary based company, might have an online ICS training program in Spanish.

GICS has an extensive network of associate partners that represent some of the world’s leading experts in emergency management. FRITA contacted Barclay Hunter at GICS for further assistance. When Hunter found out that FRITA was a volunteer-based organization, and that the firefighters of Peru are also volunteers, he offered GISC’s online program in Spanish at no cost to the firefighters of Pisac and area.

This web-based program provides ICS theory and concepts that could be learned by firefighters at their own pace. The next challenge was finding a way to deliver the program online. Again, FRITA turned to FireWise for assistance. FireWise agreed to host the program at no cost. The web development of the program now had to designed and uploaded. Working with Amelia Sangara of FireWise, FRITA was put in contact with their web designer, Tim Davis, owner of Cybersalt in Victoria, B.C. Working with Witt, Davis was able to, with Witt’s ability to speak Spanish, create the Beta version for testing in early September. In October the online program went live and firefighters were able to enroll and complete the theory portion.

With 55 firefighters having completed the online training program, FRITA instructors Boswell and MacLeod reviewed the basics of the ICS 100 program in the classroom and had the bomberos participate in small scale tabletop exercises that included wildfire and mudslide scenarios, both common occurrences in the Pisac area. While bomberos in larger urban cities such as Cusco and Lima have ICS related programs, small stations in the rural communities, like Pisac, struggle to receive this type of training. Bomberos will often travel several hours to receive training offered by firefighters from not just Canada, but countries around the world. Being able to offer ICS training to the bomberos, training that is recognized worldwide, was a great opportunity to share ideas and build relationships with our brothers and sisters across borders.

Instructors also have an incredible opportunity to see the country not just as tourists, but through the eyes of bomberos and their friends and families. While instruction is the primary reason for being in country, the bomberos ensure that the FRITA instructors experience the food, culture, music and history of the region. During the 2019 deployment, the FRITA team was honoured to be invited to participate in Peru’s National Day of the Firefighter in Cusco. Along with other stations, all from the Cusco region, hundreds of firefighters, military units, curious tourists and locals joined together at the Plaza de Armas to celebrate the firefighters and watch them on parade. Another special moment, during a celebration at the Pisac Station, was having FRITA members recognized as ‘Godfathers’ to the Pisac bomberos. Following the dedication of a training room on behalf of FRITA, the team exchanged hugs and best wishes with the bomberos knowing that in the morning the instructors would be returning home.

As descendants of the Inca people, the Pisac culture is a wonderful blend of warmth and friendship. If you are in Pisac visiting, make sure you stop by the fire station to say hello!

Norm MacLeod is vice-president of Fire Rescue International Training Association and has deployed 13 times to South and Central America. He currently works as an assistant fire chief with Mission Fire Rescue Service in British Columbia, where he lives. For further information on FRITA, please visit frita.ca or facebook.com/FireRescueInternationalTrainingAssociation.