Two serious fires tie up crews in Cambridge, Ont.; arson accounted for one, neglect for another 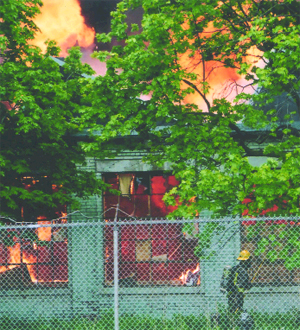 Firefighters in Cambridge, Ont., battled two major fires on May 29, 2005. After cleaning up from a fire on Dobbie Drive, they also worked a fire in an abandoned factory on Beverley Street.

PHOTO BY GARY DINKEL
A Cambridge firefighter checks out the fire’s progress in this abandoned factory about 10 minutes after arrival. The single-storey building measured 150 ft. by 100 ft. and only exterior operations were carried out.

The day began early when an automatic alarm was activated at Cambridge Fire Dispatch at approximately 0300 for Cambridge Towel on Dobbie Drive. Pump 5, Aerial 1 and Car 6 with Platoon Chief Grant Hughes were dispatched on the first alarm.

Firefighters were very familiar with this building, having had numerous false alarms and minor fires at the business over the years. The plant is located in an industrial park in the southeast end of the city. The building contained thousands of rolls of finished material and hundreds of skids containing rolls of fibre/string used in the manufacturing of the towels.

The 200×500-ft. building was divided into sections containing warehousing for finished and raw materials and separate areas for knitting, finishing, and dyeing. The building was closed for the weekend when the fire started.

Pump 5 arrived on scene and made entry into the building with keys from a lock box. Once inside firefighters were met by moderate smoke conditions. Rescue 1 and Aerial 4 were added to the dispatch when a fire was confirmed in the structure. Firefighters searched the building one section at a time. A burning barrel was located and was quickly extinguished with a dry chemical extinguisher. Additional fires were discovered in pallets of string throughout the building as well as in an office mezzanine within the plant.

The fires were knocked down quickly with handlines. As quickly as one fire was knocked down with a line, another one would be found. Sprinklers activated in the plant kept the fires from spreading from one pallet to another.
BOX 690 Canteen was paged to respond to the scene at 0430 when it became apparent firefighters were in for a long battle. The pallets of string had to be removed from the building as they continued to smolder. This process was a strenuous task for firefighters as the pallets of product had to be pulled apart by hand and placed on dollies to be removed from the building. Aerial 2 was added to the call at 0515 to relieve weary firefighters. Day shift firefighters replaced the tired crews and continued to work in shifts to remove the smoldering pallets. Firefighters worked in full gear including SCBA for half an hour pulling loads apart and then took a half hour rehab break for food and fluids with BOX 690 Canteen.  The last skid was pulled from the building at 1230. The three remaining stations were returned to quarters at approximately 1300 hrs.

An inspector from the Ontario Fire Marshall’s office worked closely with Cambridge Fire Prevention inspectors and Waterloo Regional Police to determine the cause. The inspectors had to determine how the fire could break out in so many different locations in a sprinklered building.

They were able to locate an area where one of the fires started due to an electrical problem. The next crucial clue came from security videos from inside the plant. Fire could be seen travelling along beams in the building above the sprinklers. Years of lint and dust had accumulated on the trusses. The lint burned and fell down in different locations throughout the building, igniting the bales of material and the barrel. Damage has been pegged at $700,000 and is still under investigation by the Ontario Fire Marshall’s office.

The second call
Crews had just finished their lunches after cleaning and checking their trucks from the earlier fire when, at 1440, Dispatch toned out Pump 5, Aerial 4, Rescue 1, Aerial 1, and Car 6 with Platoon Chief Al Robinson for a confirmed fire in an abandoned factory on Beverley St.

All three stations reported they could see heavy black smoke while responding to the call.

A4 arrived on scene first and caught a hydrant on Beverley Street and set up in front of the building. The initial report from the on-scene officer noted they had a single-storey abandoned factory measuring 150 ft. by 100 ft. with fire well involved and possible extension to an attached one-storey warehouse.

A1 and P5 also picked up hydrants on Beverley on the way in. A1 set up their ladder on the E4 side of the building while P5 set up at the rear. After conferring by radio with crews on scene, Platoon Chief Robinson assumed command upon his arrival. Numerous 1-3/4" and 2-1/2" attack lines were pulled from all three units. A1 and A4 both used their water towers for exposure protection. Dispatch notified Chief Terry Allen and Deputy Chief Bill Chesney of this serious fire and both responded to the scene.

BOX 690 Canteen crew, who had just completed reloading and cleaning their truck from the earlier call, responded to Cambridge from Station #5 in Kitchener. The canteen unit arrived on scene at 1500 and set up a rehab site in a parking lot across the street. Command requested P3 to the scene at 1510 and asked dispatch to call in two off-duty crews to staff spare apparatus.

All firefighting response at this incident, including apparatus placement, was conducted outside of the collapse zone.

The rear wall and roof collapsed at approximately 1515, scattering cement blocks throughout the back parking lot. One firefighter sustained minor injuries from the flying blocks. Firefighters were all safely outside of the collapse zone.

The hot day and gruelling work at the earlier fire took its toll on firefighters. Two firefighters had to be transported to hospital suffering from heat stroke and dehydration. Crews were rotated from fire attack to rehab to give weary firefighters well-deserved breaks. Night shift crews replaced day shift crews at 1700 hours.

Eventually, crews successfully stopped the fire from jumping into the next building. P3 was released from the scene at 1730 and the remaining units stayed on scene until 2000. One aerial remained on scene for spot fires until the following evening.

The cause of this fire was determined to be arson, with damage being estimated at $100,000. The building was slated to be demolished. A second fire, which burned itself out, was discovered in a building located 300 feet behind the fire building on the same property. No arrests have been made in connection with the two fires at this time.