The Canadian Association of Fire Chiefs (CAFC) held its Fire-Rescue Canada 2018 conference Sept. 16 to 19 in Ottawa, with a series of speakers, sessions and lightning talks to educate fire service leaders. 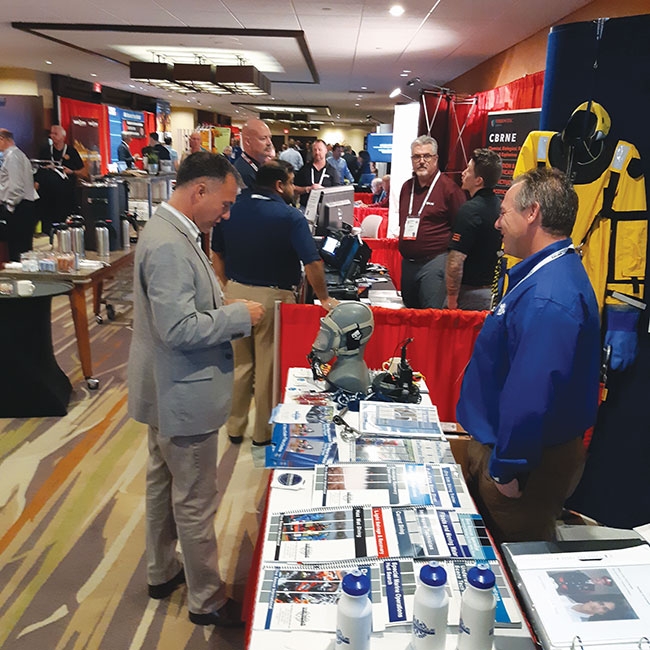 A trade show was held at the Fire-Rescue Canada 2018 conference Sept. 16 to 19 in Ottawa. The Canadian Association of Fire Chiefs held its conference in Ottawa

Edmonton Fire Rescue Chief Ken Block, who was re-elected as CAFC president, said in remarks to open the conference that it’s always a pleasure to see representatives from across the country at the event because it enables them to connect on issues of national importance to the fire service.

“It warms my heart, the vision and the mission of the CAFC,” he said. “We are connecting together and uniting for causes of the fire service.”

Block noted that the conference enables fire service leaders to get together annually to network and learn more about issues of importance and understand what the CAFC is doing at the federal level so they can report back to their departments and spread the message to their crews.

The four-day event, held at the Westin Hotel, featured myriad speakers and a trade show with booths from about 50 exhibitors.

In one session, Red Deer Emergency Services Deputy Chief Tyler Pelke gave an inspiring story about adversity, resiliency and forgiveness. One night, at age 14, his friend was murdered while he was sexually assaulted. His attacker slit his throat, set him on fire and left him to die, but Pelke survived. He told the compelling story and how he later confronted his attacker in prison and found peace.

Lawyer John Saunders, a partner at Hicks Morley Hamilton Stewart Storie LLP, and communications consultant Karen Gordon offered a stark assessment of how the MeToo movement could affect the fire service and what chiefs and fire departments need to do to avoid problems.

In another session, Calgary Police Service Superintendent Nina Vaughan, a vocal proponent of equity and inclusiveness in policing, spoke about the importance of gender equity in the fire rescue services and how unconscious biases can be dangerous because they affect the decisions that are made by leaders. Vaughan, who is a founding member and chair of Alberta Women in Policing, talked about her own experiences and what steps fire chiefs must take to bring about change in their departments.

Meanwhile, Christopher Howe, an Acting Captain in the Niagara Falls Fire Department, gave an overview of his personal struggles with alcohol and drugs and how he overcame obstacles to become sober and lead a better life. He offered a raw, no-holds-barred, emotional account of his battle.

The CAFC also had business to take care of at the conference. A town hall was held during one of the morning sessions and various committees reported on their activities and plans for the future.

The CAFC has plenty of items on the agenda for the coming year. For example, the association is preparing to provide input on how details of the Memorial Grant Program for First Responders are fleshed out. The program provides $300,000 to the spouses, children and family of firefighters, police officers and paramedics who lose their lives as a result of carrying out their work duties.

Calgary Fire Department Deputy Chief Laurie VandeSchoot of the CAFC’s diversity and inclusion committee, said in remarks at the town hall that another challenge is how to increase diversity of the fire service.

The CAFC committee is starting to collect some inclusion-friendly practices for departments and will be focusing on how to get more women and Indigenous people into the fire service.

Another major focus area of the CAFC in the years ahead will be to bring more members into the association and expand its reach. Board members are looking at what must be done to make that happen.

President Block noted at the town hall meeting that the CAFC understands the importance of relationships and that any organization is only as strong as the membership that stands behind it.

“We need to bring as many members as we can under the CAFC tent,” he said, noting that momentum is growing. “If we can broaden our base it will only allow us to do more and become more effective.”