The Kemptville (Ont.) Fire Department marked its anniversary by hosting the Eastern Ontario Firefighters Association Convention and winning the competition 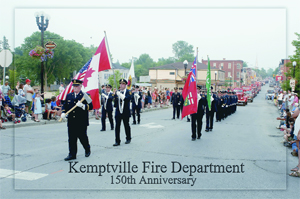 In June 2005, to celebrate 150 years of serving its community, the Kemptville Fire Fighters Association hosted the 93rd annual Eastern Ontario Firefighters Association Convention, in which seven departments took part in competitions throughout the day.  The departments included Kemptville, Iroquois, Augusta, Cardinal, Edwardsburg, Mississippi Mills and Athens.
The convention kicked off on June 24 with a meeting of the competing teams and a presentation by guest speaker Ontario Fire Marshal Bernard Moyle and the unveiling of the Orange County Chopper Fire Bike.

PHOTO BY BETTY COOPER
A colourful parade for the public was held to conclude the Eastern Ontario Firefighters Association convention, which highlighted the 150th anniversary of the Kemptville Fire Department.

The Orange County Chopper Fire Bike was built to honour the 343 firefighters who lost their lives at the World Trade Center on Sept. 11, 2001.  The bike proudly displays a bolt on its gas tank from the rubble of the WTC.  The bike was tailored to display many aspects of firefighting. A leather helmet crest can be found on the front fender of the bike displaying the number 343, the Maltese cross can be found in the tire rims, the carburetor was manufactured to simulate a fire hydrant and the exhaust resembles a fire hose with a nozzle.  With many other firefighting details, this bike is truly a breathtaking way to honour the firefighters who lost their lives on 9/11.

Kemptville Fire Chief Tim Bond was the driving force behind bringing the Fire Bike to Canada for the first time since it had been manufactured by the Orange County Chopper team.  Through several contract negotiations and fundraising efforts, the dream of Chief Bond became a reality when the Bike rolled into Kemptville on the evening of June 23 for an event-packed weekend.  The bike was on display at various times throughout the weekend for firefighting and bike enthusiasts to enjoy.

Saturday, June 24, the games kicked off at 9:30 a.m. and the competition was fierce right from the start. Less than five seconds separated the first and fifth place teams in the eight-member hose-coupling contest.  In the five-member ladder climb contest, Kemptville Team #2 and Augusta Team #1 finished with the same time of 11.59 seconds.  A tie-breaking run took place between the two teams to determine first and second place, with both teams beating their first times.  Augusta Team #1 earned top honours with a time of 11.24 seconds, leaving Kemptville Team #2 in second place with a time of 11.26 seconds.

Leading into the last event, Kemptville and Mississippi Mills were tied with 29 points.  In the last race of the day, the eight-member bucket brigade, Kemptville triumphed with a time of 56.89 seconds, securing first place to win the tournament. The team was awarded the Iroquois Firefighters Memorial Cup with a total of 34 points overall. Mississippi Mills came in second place and was awarded the Collett and Laporte Cup with 33 points overall, after completing the bucket brigade in a time of 56.95.

The competition concluded with a parade of firefighters in full dress uniform, with antique and frontline vehicles from many area fire departments.  The parade marshal was Ontario Fire Marshal Bernard Moyle who rode in the 1914 International fire truck owned by the Kemptville Volunteer Firefighters Association and driven by Department Engineer Howard Wilson.  The parade was led by two Ontario Provincial Police officers from the motorcycle unit and the Orange County Chopper Fire Bike.

The convention wrapped up with an awards presentation and dance featuring Prairie Oyster.
Convention Chair Kemptville Deputy Chief Harold Workman co-ordinated the weekend of events with the assistance of other volunteers.  The weekend raised several thousand dollars to be put toward the purchasing of equipment for the department by the firefighters association.

The history
From the book “Kemptville, Past and Present” by J. Carr Anderson published in 1903.

In July of 1855, after the town of Kemptville, Ont., was visited by several large fires, plans to prevent a reoccurrence of such a catastrophe by having a well-organized and equipped fire department were underway.
The following notice was posted in the local paper: “The subscribers to the fund for purchasing a fire engine for this village are requested to meet at Lyman Clothier’s hotel on next Friday the 20th inst. At half past seven o’clock, precisely, in order to receive the report of the committee, and to transact other business of importance connected therewith.”

A complete fire engine was purchased and a company formed.  The engine was an old hand engine, which saw duty until 1881.

The department was one of the most thoroughly equipped volunteer departments to be found in any town of its size in Ontario.  The river on which it is situated furnished a natural water supply and on its banks “engine stands” were erected where any amount of water could be readily secured.  The equipment consisted of the latest improved Silsby engine, made in Seneca Falls, New York, 3,000 feet of hose on two reels and all the other necessary attachments and appliances.  Any part of the town could be reached a few moments after an alarm was given.

The efficiency of the brigade had been tested frequently.  Once, a representative of the Underwriters Association gave an alarm, quite unknown to the officers, and in a short space of 9-1/2 minutes the brigade was in working order and a stream of water running.  This materially reduced the rate of insurance.
The fleet

In 1919, the first motorized emergency vehicle purchased was a 1919 Model T Ford American LaFrance chemical truck.  This truck was used in conjunction with the steamers as a initial attack vehicle giving the steamers time to set up.   The whereabouts of this vehicle were unknown for several years, but it was recently located by Deputy Chief Harold Workman just 20 miles away.  The department keeps in contact with the owner in hopes of adding the vehicle to its fleet someday.

In 1919, the first of many International fire trucks owned by the Kemptville Fire Department was also purchased. This 1914 model was used to pull the steamer and take hoses and ladders to the fires.  In 1941, this truck was used as a trade-in when the 1941 International fire truck was purchased.  Arthur Eager was an International dealer at the time and took the 1914 to his farm and for several years it was used as a truck in the field to haul crops.
Around 1966, the volunteers received permission from Eager to use the 1914 truck in parades.  In 1976, the volunteers purchased the truck from the Eagers.

In 2000, the Firefighters Association decided to completely refurbish the truck to its original condition. Workman, as the project chair, organized the refurbishing. He removed all the wood components and duplicated them using white oak.  Harold spent countless hours working on the truck and other members assisted with the sandblasting and re-assembly.  The late Ken Seymour, a retired firefighter, worked on the motor and transmission and the volunteers worked on the remaining mechanical systems.  The Kemptville Truck Centre, our local International dealer, did the bodywork.  The tires (which are solid rubber) were re-rubberized to their original condition by Weirton Bandag (a company in West Virginia).  Kriska Transport shipped the tires to the United States and back for the association.

The 1941 is a triple combination pumper that remained in service until about 1965.  It has 7,800 original miles on it and has also been completely refurbished by the Firefighters Association.

Modern history
In 1994, the department passed a Superior Tanker Shuttle Test by the Fire Underwriter’s Survey obtaining a water delivery at a rate of 500 gallons per minute over a two-hour period within a five-mile distance of the fire hall.  This test gives residents of the municipality living within five miles of the fire hall a hydrant-protected rating for their home insurance.

Through many changes over the years, the Kemptville Fire Department currently serves the Municipality of North Grenville after amalgamation of the town of Kemptville and the townships of Oxford on Rideau and South Gower. It is located about 30 kilometres south of Ottawa. The department is under the direction of full-time Fire Chief Tim Bond and currently has a  roster of 35 members. Frontline apparatus currently consists of a 1982 International Thibault pumper, a 2000 International five-seat triple combination pumper, two International 3,000-gal. tankers, an International heavy rescue truck, a light rescue truck, an equipment van and a chief’s truck.  The entire fleet can be viewed on the municipality’s website at www.northgrenville.on.ca/fire.