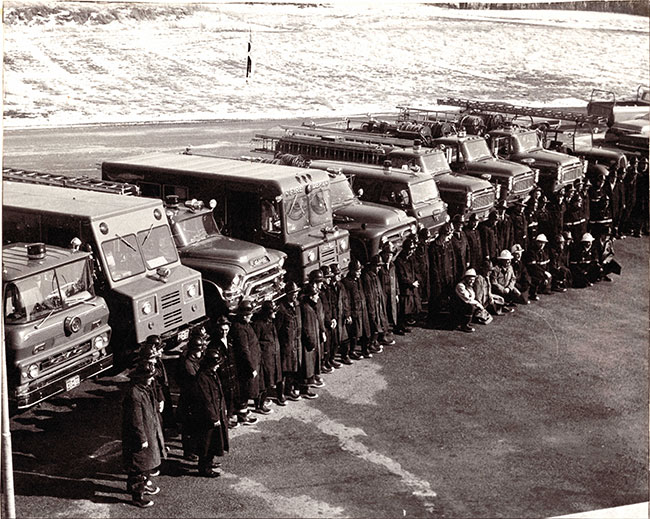 ommemorative photograph was taken in 1970 to mark the official creation of the department Credit: Lincoln Fire Rescue

This year marks the 50th anniversary of Lincoln Fire Rescue and the town of Lincoln it serves. Lincoln is a community of about 25,000 that spans 162 square kilometres on the southern shore of Lake Ontario and the Niagara Escarpment. Having come into existence on Jan. 1, 1970 through the amalgamation of several municipalities, the four existing fire departments of the time were combined under one chief and officially became the Lincoln Fire Rescue.

Current Fire Chief Greg Hudson—who began his career as a volunteer in 1988 before moving into the full-time position of deputy chief in 2006 and into role of chief in 2011—said the department has come a long way since its inception.

“When I first started 32 years ago, the amalgamation was still pretty fresh in people’s minds and [the stations] were really operating as four separate departments,” he said. “As time progressed, one of the biggest steps we took to overcome that was conducting joint recruiting and training and, though it took a couple of generations, the stations slowly became assimilated into what is now one cohesive department.”

Today, the department has 118 volunteer firefighters, 12 auxiliary members, two fire prevention officers, a chief, deputy chief and an emergency manager. It consists of four stations and has 16 major apparatus pieces as well as support vehicles and command cars.

The Town of Lincoln benefits from tourism—largely known worldwide for Niagara Falls—and has vast roots in the agricultural sector, particularly with its craft beverage industry, which consists of over 50 wineries, craft beers, ciders and a spirits distillery.

“We decided to use local Sue-Ann Staff Winery for the photo location,” explained Hudson. “This winery is situated on a 200-year-old family farm operated by the Staff family, who have had members on the Lincoln fire department for generations.”

The photo was taken on Sept. 19 by fireground photographer Mitchell Brown and clearly illustrates how much the department has progressed in the last half-century. One of their retired firefighters also shot drone footage of the event.

“He created a video set to music that was really remarkable and quite moving and really captured the sense of pride, camaraderie, and working together as a team that is the cornerstone of Lincoln fire department—and indeed every fire department in Canada.”

Hudson said that because all of the staff and equipment was tied up at one location during the shoot, the neighbouring Grimsby Fire Department provided coverage while the photo was being taken.

In another effort to adequately celebrate the milestone, the department also decided to update their shoulder flashes and truck decal for the first time since 1970. With staff input—via surveys as well as sketch and descriptive suggestions—the design was finalized in late 2019.

“Some elements of the past were considered and we wanted to make sure it represented some of our values going into the future,” Hudson explained.

He said this also generated another idea: a challenge coin. While COVID-19 delayed production, all firefighters and serving members of City Council are set to receive a coin that commemorates their history and efforts to move forward with purpose. Two coins were created. A silver coin is the official Lincoln Fire Rescue challenge coin, which was issued to all members of the department. A gold coin was also created as a “special fire chief’s challenge coin” which is inscribed on the edge “Presented by the Fire Chief”.  Hudson said the chief’s coin is given out on special occasions to recognize a significant accomplishment or achievement in the area of fire safety, public education, or emergency response by a fire department member or member of the community that is worthy of special recognition.

The town itself had also planned several celebrations throughout the year, including a special Canada day fireworks celebration, but the coronavirus pandemic disrupted many of them.

“COVID-19 has definitely posed quite a few challenges and, while it’s been an interesting time, as things progressed, I think we got a little better at adjusting,” he said. “When it first hit and everything was kind of shut down so we basically shut down our firefighter training and made rules not to show up unless there was an emergency call.”

They moved training online using zoom and other online resources, but when restrictions started lifting across the province, Hudson said they began incorporating more hands-on training.

As a volunteer department, he said one of the biggest changes in recent years was an EMS decision to limit their medical call response. Nearly four years ago—long before COVID-19—protocols were adjusted in an effort to minimize firefighter fatigue and increase department effectiveness when responding.

“Over the past few years, Lincoln has actually decreased our average number of annual responses despite having an ever-growing population,” said Hudson. “We went from an average of 771 calls per year five years ago to 720 per year now.”

When asked what he sees in the Lincoln department’s future, Hudson said he sees more demands for the fire service. Statistics show the city is growing rapidly year over year, which may pose challenges for the volunteer department. He said recruiting has been challenging.

“In our particular case, that’s really putting a challenge on being able to maintain a volunteer fire service the way we have for the last 50 years,” he said. “I don’t know what the next 50 years will look like but I suspect that keeping up with the population growth will be huge.”

He says they plan to focus on recruitment. While they often have a good selection of candidates, rules around which stations one can serve—depending on which is closest to where the individual lives—can sometimes pose a problem for the more rural stations.

But despite future challenges, he said, the celebrations were a great nod to the heritage of the town and the Lincoln Department while marking the start of a new chapter. While PPE, equipment and culture has changed over the past 50 years—as is easily evident when contrasting the two photographs—he noted the reasons firefighters do the job has not.

“At the end of the day, I look back at my time at the department and am proud I can honestly say I’ve made a difference,” Hudson said. “There’s not many careers that people can actually look back and say that actually made a tangible difference to somebody else’s life and that’s I guess that’s one of the most things I cherish most of the number of years I’ve been with the Lincoln department.”