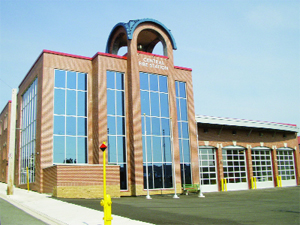 Nineteen months after tenders were closed, the new St. John’s Central Fire Station was officially opened, on Sept. 17, 2004. “It was a fitting date to close the existing Fort Townshend building and to open our new site. It was on Sept. 17, 1878 the old fire station bell rang for the first time,” said St. John’s Regional Fire Department Director Mike Dwyer.

PHOTO COURTESY SJRFD
The new central station of the St. John’s Regional Fire Department also houses the city’s 9-1-1 centre and a fire museum. It is topped with a cupola holding an historic 1878 brass fire bell.

Tenders for the construction of the new station and 9-1-1 centre closed in April 2003, for a three-level 2,575-sq.-metre steel and masonry building. Emery Construction was awarded the contract, worth just over $4 million. The entire project was worth approximately $5.7 million, including other components not related to construction. Much to the distress of those involved, in December 2003 Emery abandoned the project. The project’s bonding company then retained Olympic Construction to complete the remaining 55 per cent of the project.

The director of regional fire services, a secretary, a deputy chief, a mechanical superintendent and a management analyst have offices on the third floor. Also on the third floor is the 9-1-1 communications centre, which is staffed by a captain and eight dispatchers, two of whom work per shift. The city’s Emergency Operation Centre is located on this floor.

The pride of this new station is its fire bell, an important piece of the city’s history. An 818-kg bronze fire bell was placed in a specially designed cupola atop the station. The bell was presented to St. John’s and its then volunteer fire department in 1878 by the provincial government. For years the bell was used to summon firefighters to calls.