Over 50 departments were involved in this incident; Halifax was called to cover valley stations, for the first time in 80 years 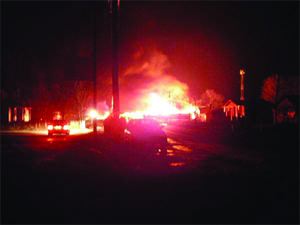 Kentville (N.S.) Volunteer Fire Department Chief Shawn Ripley called for four mutual aid tankers even before he left his driveway at 01:00 hours on Feb. 8, 2006. He drove the six kilometres to the scene of a reported major fire at Centreville Truck Repair Ltd., on Highway 359 in rural Kings County.

The call relayed from the dispatch centre indicated a neighbour across the road from the large facility had heard an explosion and looked out to see flames coming from the front and roof of a two-storey brick and wood structure.

Well before he reached the scene, Chief Ripley knew he had a major fire on his hands, as the glow in the sky indicated the blaze was being fuelled by an assortment of petroleum products, along with oxygen and acetylene tanks stored in the building.

Even at that early stage, the fire and heat were so intense that fire fighters could not even drive by the front of the building.

Defensive attack was only option
Assuming command, Ripley quickly determined that he could only launch a defensive attack, as it was obvious the structure and contents were a total loss.  There was no point risking his fire fighters when no people were in immediate danger.

Attention needed to be concentrated on saving two other large structures on the same lot, as well as six nearby homes.

Patrolling RCMP officers were on the scene even before Ripley arrived. They correctly ordered power cut from a wide area of Kings County, when it became apparent that a service truck would not be able to get close enough to a utility pole to cut the power in the immediate vicinity.

All seven Kentville units were called to the scene, along with additional mutual aid, in the form of tankers, pumpers, rescue units and aerial ladders from three neighbouring counties, some travelling more than 100 kilometres. In total, 46 units, including 22 tankers hauling water from hydrants and ponds up to four kilometres away, were actively involved.

Massive resources called
Departments responding with mutual aid in turn called on other departments for stand-by at their stations, requesting trucks and personnel from an even wider area, including the South Shore of the Halifax Regional Municipality, some 300 kilometres away. It was the first time in over 80 years that Halifax was called for such a mutual aid response. Ripley estimates at least 52 departments were involved, either at the scene or on stand-by at other stations.

Inside the building were three large compactor-style recycling trucks, two speedboats and a motorcycle that were being stored. Also on site were a forklift (its propane cylinder exploded and shot out the front of the building and across the highway at one point), a horse trailer, and more than 50 drums of oil and quantities of hydraulic fluid.

Another four garbage/recycling trucks parked against the exterior of the building were lost, as well as a pick-up truck that was literally sucked part way into the building by the intense draft created by the inferno.

In total, 17 vehicles were totally destroyed or damaged, including a 1984 Ford Thunderbird that was parked several metres away from the garage but whose roof served as a landing pad for an oil drum that exploded and flew through the air, narrowly missing an aerial ladder.

Families in six homes in the immediate vicinity were evacuated or asked to leave as the fire raged and fire fighters had to train water on one of the houses to cool it down and extinguish flying embers.

From the outset, the word to fire fighters was, "Don't try to be a hero," Chief Ripley said, and as a result the only time injury occurred was when one fire fighter was struck on the hand and another on the shoulder by an errant nozzle.

Lucky 'everyone came home'
The chief does acknowledge, however, that given the severity of the blaze and explosions that lit up the night sky like fireworks, "We were lucky everybody came home."

Added to the challenge was the winter temperature that hovered around minus 8 C, with 30-40 km/h winds, first from the northwest and later from the southwest. Water supplies were too far away for hose lines, which were freezing to some extent anyway. Unmanned deck and aerial ladder guns were the only means of keeping streams of water on the blaze.

The fire was under control by 05:30 hours and shortly after a track hoe was brought in to knock down the walls that were still standing. All vehicles were back to their stations by 10:30 hours, and only one call back to douse a hotspot was recorded at 16:30.

Lessons learned
A debriefing pointed out the necessity to call for tankers early in the incident, Chief Ripley said. "We had eight other properties to protect, so we deployed crews to several locations." As a result, the exposures sustained only minor heat and smoke damage.

"We also learned the need for more radio channels," the chief said. "We had three, but could have used four or five to keep track of water supplies and other factors."

Cause of the fire has not been determined, but Deputy Fire Marshal Harold Pothier of the N.S. Office of the Fire Marshal said evidence points to an electrical or heating equipment malfunction. Total damage is expected to top $2 million.

The department
The largest fire department in Kings County in Nova Scotia's Annapolis Valley, Kentville Volunteer Fire Department has responsibility for the town of Kentville and a large area of the rural municipality, extending as far as 35 km from its centre. Of the 58 active members in the all-volunteer department, 53 attended the Centreville blaze, one of the largest turnouts in memory.W