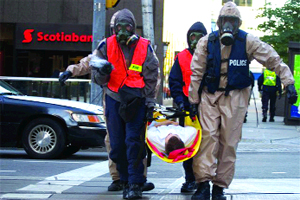 An explosion rocked the St. Andrew’s Subway Station in downtown Toronto at 0830 hrs on Sept. 18, 2005. Minutes later, the survivors, assisted by transit security personnel, began to emerge at street level. Aside from the blast effects of the explosion, many were covered in a white powder and had respiratory complaints.

PHOTOS COURTESY THE AUTHOR
Members of Toronto’s joint CBRN team carry a victim during the exercise held last fall in the city’s downtown.

Immediately, calls went out for emergency assistance and, with this simulation, began the city of Toronto’s exercise of its emergency preparedness and tested the capabilities of its Joint Chemical-Biological-Radiological-Nuclear (CBRN) Team.

CBRN responders advance
A short time after the simulated explosion, three CBRN responders, clad in protective attire, approached the scene from where their team had staged just a block away.

The three, one firefighter, one paramedic and one police constable approached cautiously. As they moved closer, they continuously took readings of airborne toxins and contaminants using hand-held detectors. Each with their assigned roles, they assessed the scene and patients, and spoke with witnesses to try to ascertain what had occurred, as well as the response that would be required.

The ambulatory patients were then moved to a decontamination area that had been set up, and more CBRN team members went into the subway station. They proceeded to remove the non-ambulatory patients, assess the damage and attempt to make the area safe. As well, the police members conducted a forensic investigation of the scene to determine cause and origin of the explosion.

Casualty count low
While the casualty count was quite low in this simulated incident, several transit security staff were among the victims and it is likely that, had this incident been real, more first responders would have been injured or killed before they recognized the nature of the incident.

As things were winding down, a second (simulated) explosion was reported in the Toronto-Dominion Bank Centre, adjacent to the staging area, as well as a bomb threat in another adjoining building. While a few improvised explosive devices were found that had not detonated, the one that did explode released a quantity of hydrogen cyanide gas that injured more inside the tower. While the tower was being evacuated, and the victims treated and decontaminated, the police arrested someone whom they believed was trying to use a radio to detonate one of the other devices.

Just a test
This exercise was a test of the city’s ability to respond to CBRN incidents triggered by terrorists. The city’s mayor, in the Emergency Operations Centre (EOC), oversaw the whole exercise, as he would if the incident been real. EMS operations contacted surrounding ambulance services to determine if they could service calls in areas left vacant, as city ambulances moved in to transport patients from the explosion. Through the EMS destination co-ordinator, it was determined what hospitals could take patients, and how many and of what acuity they could manage. Canadian Blood Services was contacted to see, had the incident really occurred, how much blood they could supply. The local transit service provided buses to move ambulatory patients. Toronto EMS responded with its Multi-patient and Emergency Support Units.

Common radio system
In Toronto, all emergency services now utilize a common radio system that, especially in circumstances such as this, facilitate seamless communication between services and is utilized extensively by this joint team.
The Toronto CBRN team was developed to provide a co-ordinated response to criminal acts involving CBRN materials.

Background on the team
The Toronto Police Service, being one component, brings explosive disposal, special weapons and forensic identification skills to the team. In addition to the technical response, The Toronto Police has trained and equipped a number of uniform officers to perform policing duties in contaminated environments. Police are ready to deploy appropriate tactical response resources specifically equipped to respond to and mitigate an armed terrorist encounter involving CBRN weapons.

The Toronto Fire Services component includes Hazardous Materials/CBRN technicians who form the foundation of Toronto Fire’s contribution to the Joint CBRN Team. The primary responsibilities at a CBRN incident include intervention, containment and mitigation of the CBRN agents. Toronto Fire also facilitates technical on-site expertise of the hazardous material and/or CBRN agents, and provides rescue and extraction of injured persons within the contaminated areas, along with the appropriate decontamination of affected persons, response team members and equipment.

Toronto EMS provides CBRN-trained paramedics to the Joint Team. These paramedics are trained to assess the impact of the incident on the Health Care systems as well as to provide emergency medical treatment while wearing personal protective equipment in a contaminated environment. In addition to providing medical support to other members of the team, CBRN Paramedics and EMS also perform casualty management both inside and outside the contaminated area.

Simon Martin has been involved in EMS in Ontario for over six years. Following his education as a paramedic at Toronto’s Humber College and Michener Institute, he worked as an Advanced Care Paramedic with York Region EMS. He then embarked on a career in Air Ambulance and worked in various locations in northern Ontario, prior to returning to Toronto. Currently he is employed as a Critical Care Flight Paramedic on “Bandage 1” in Toronto with Canadian Helicopters’ EMS Division.