Fire chiefs in Ontario and B.C. gathered in May and June for annual association trade show and conferences — and of course much networking and socializing to boot. Fire Fighting in Canada touched down in Toronto and Victoria to round-up some of the key highlights and product buzz. 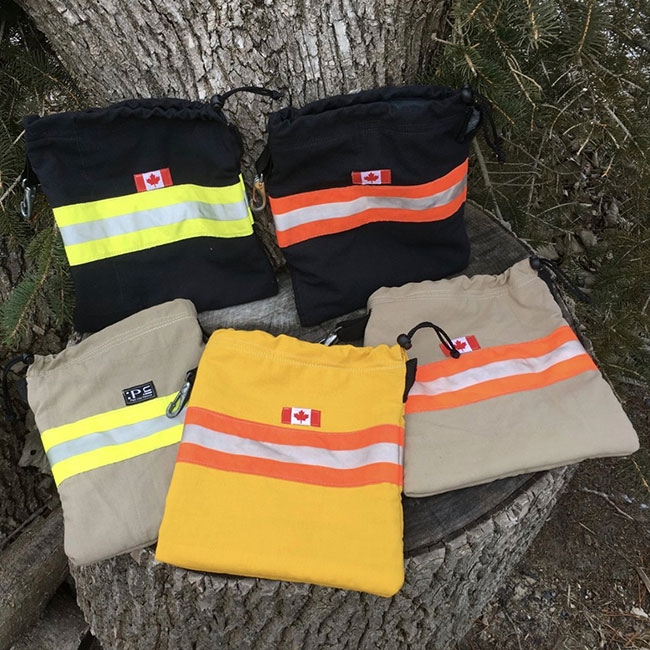 Past Into New is an Ontario-based clothing and accessories brand that makes one of a kind creations from recycled firefighter gear and hose. Fire chiefs in Ontario and B.C. gathered in May and June for annual association trade show and conferences – and of course much networking and socializing to boot.

The Ontario Association of Fire Chiefs (OAFC) hosted OAFC 2018 from May 3 to 6 in a new duo-location format. The Delta Hotels Toronto Airport & Conference Centre housed the educational component, and the nearby International Centre showcased the trade show (May 4-5). The four-day event included a networking “FUN” Raising Night for the Canadian Fallen Firefighters Foundation sponsored by A.J. Stone and Safetek (which rallied to carry on despite a windstorm induced power outage in the hotel), and a memorial service to recognize and honour chiefs who have died since the last conference.

The “Leading in Transition” seminar for the suburban/rural track was delivered by Steven Knight of U.S.-based Fitch & Associates (who provide consultancy for emergency services) and Division Chief Ian Womack of the St. Petersburg Fire Rescue in Florida. The key takeaway from this session revolved around how the fire service delivers its messaging in the recruitment process. Currently, becoming a firefighter invokes emotions of heroism, trust, fear excitement, comradery, pride and sacrifice, shared the presenters. But the build-up of excitement may lead to disappointment when the actual day-in-the-life isn’t always jam packed with adrenaline inducing calls and actual fire suppression is becoming less and less of the job. Rethinking the messaging to put life safety and prevention at the core of the mission will help set expectations and attract people who will stick around long term. Recruitment efforts should put the emphasis on community service, rather than excitement.

Part of the urban chief program, “Psychological Screening in the Fire and Emergency Services” was led by Dr. Lori Gray of Frontline Resilience. Gray defined psychological testing as it pertained to her seminar as a method of screening for psychological ability for the role at the current time to determine if the candidate is well matched for the stressors experienced on the job. Psychological screening is not recommended as a tool for making the final decision she said, but it is one of several puzzle pieces that can inform in making a selection.

Psychological screening is useful for identifying traits that are a poor fit for trauma exposure, such as personality issues regarding anger/rage. Most departments are more interested in sussing out the contraindications that seeking positive traits, she said, although the screening can produce results for both. The testing can be beneficial at three stages: as primary prevention before employment, as secondary prevention to assist someone after trauma or in the case of consideration for promotion or a high-risk unit, and tertiary prevention to determine access to programs such as WSIB for when a person is not doing well after a tragic experience. Screening is done by qualified clinicians and there are different levels with different price points including individual and group testing (most cost effective). She recommends sending more people than you need for screening, because issues come up and you shouldn’t have a 100 per cent pass rate.  She also recommends withholding results from candidates because people could come back next year with a strategy to produce different ones.

Gray spent some of the session speaking on resilience, which she posited as one’s journey through adversity. Resilience displays humour and an ability to take things in stride. She pointed out that living a “charmed life” doesn’t mean a person is resilient — maybe they have not been tested that much by life yet and that is something to consider in hiring. It is good to look for someone with a proven ability to cope.

■ From the show floor
From apparatus demos in the parking lot that hoisted folks high into the air, to buzzing energy between attendees and vendors indoors, the International Centre housed a great display of fire service equipment. Here are a few finds from the show floor.

Get the odour out: X-TINGUISHER is a line of cleaning products developed for firefighters who are exposed to heavy toxic smoke that is 99.9 per cent organic. The line includes odour elimination spray, concentrated laundry liquid, smoke odour elimination non-toxic cleaner, body wash, an odour elimination kit for wardrobe stylists and people who dance, workout and cheerlead.

New in hoses: BullDog Hose Company is a newly rebranded hose company that made its fire industry debut at this year’s Fire Department Instructor’s Conference (FDIC) in May and also set up a booth at this year’s OAFC trade show looking to make connections. They are a hose supplier for fire departments throughout the U.S. and Canada and showed off their new hose lines: Hi-Combat, Hi-Vol and Firepower II. BullDog products offer abrasion resistance, improved ease of drag and anti-kink, and a tough protective coating.

Reinventing old gear: Past Into New is an Ontario-based clothing and accessories brand that makes one of a kind creations from recycled firefighter gear and hose. This was the company’s debut year at the OAFC trade show where they showed off their classic and new pieces including; SCBA mask bag designs, shaving tool kits and leashes and more.

Past Into New is an Ontario-based clothing and accessories brand that makes one of a kind creations from recycled firefighter gear and hose.

Topics covered varied greatly including talks about communication, wildfire response, how to lead in complex times, using drones during a fire, how to battle apartment fire and more. Each information session was geared towards chiefs and how to better their departments. Three heavily attended sessions were “A Fire Chief’s Guide to Media”, “How to Build your Fire Chief Brand” and “How to Battle Flat Roof/Apartment Fires”.

“A Fire Chief’s Guide to Media” and “How to Build your Fire Chief Brand” were taught by Karen Gordon, communications strategist and principal of Gordon Strategy. Gordon spoke in a humorous and light-hearted manner on ways for fire chiefs to learn how to navigate and use social media and the Internet more efficiently for their departments, communities and their own personal brand.

Three takeaways from Gordon’s guide to media were 1. A better understanding of media and social media and its role in the fire service. 2. A lesson on developing talking points and key messages and 3. How to maximize your time in front of the camera. Gordon taught chiefs things they should never say in front of the camera at a press conference, reminded chiefs to carry themselves as chiefs at all times and warned chiefs that everything they post online, whether on a personal or work account, is public the second they hit post.

Gordon spoke on building a brand for yourself later in the afternoon on the same day. This session focused on how a chief can start using the Internet to brand himself and that the things he does and says in public or online are important factors when his personal brand is being developed. Gordon kicked off the session by mentioning several names of high-status individuals and celebrities and asked the chiefs in the audience to describe each individuals brand. When she mentioned famous golf player Tiger Woods, most chiefs picked up on his infidelity to his wife before they spoke to his skills as a golf player. The activity highlighted Gordon’s point of there being good or bad ways to brand yourself as either a trustworthy and reliable fire chief in a community or a rude and unrelatable one.

Three takeaways from Gordon’s “How to Build your Fire Chief Brand” were 1. Understanding what a brand is and why you need one. 2. Key considerations to building your fire chief brand and 3. How to build your own fire chief brand.

“How to Battle Flat Roof/Apartment Fires” was taught by John Macdonald. Macdonald started his firefighting career as a volunteer in 1992 and worked his way up to his most recent position as assistant chief of training at Coquitlam Fire Rescue in B.C.

Macdonald shared what he said he has learned over years were best-practices for dealing with, suppressing and putting out fires in buildings with flat roofs and apartment buildings. He focused on:

Macdonald closed his presentation with some videos and a case study. Takeaways from his session were 1. Improved construction knowledge through pre-incident planning. 2. Increased knowledge of strategies and tactics around apartment fires. 3. Improved firefighter and occupant safety and 4. Better understanding of the challenges that incident commanders, officers and firefighters face at these types of incidents.

The association’s Annual General Meetings were held during the expo as well.