Defining and interpreting what clean cab means to your department 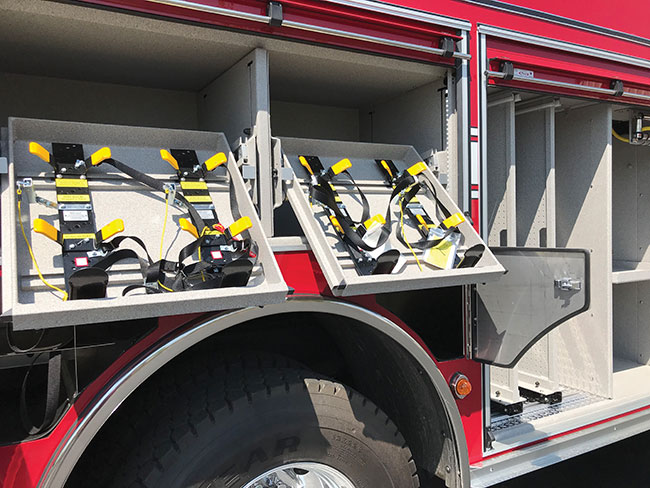 The SCBA holders show how it can look to store the equipment outside of the cab. Photo credit: Commercial Emergency Equipment

Cancer often kills by stealth, coming to fruition through a culmination of factors multiplied over years rather than the sudden flip of a switch. By the time symptoms arise, patients are often already in peril. When one is young and healthy, worrying about cancer seems displaced; a fear reserved for ageing parents. But for all, and for especially firefighters, taking preventative actions against cancer while relatively young and healthy is a cornerstone effort to ducking its life-altering grip in later years.

Over the last decade, cancer has really come into its own as a recognized threat to firefighters. Rightly so. A recent report published through the University of the Fraser Valley in British Columbia — Canadian Firefighter Fatality and Injury: Trend Analysis of AWCBC Fatality and Injury Claims 2006-2018 — challenged the notion that the decontamination processes that have gained traction are enough to stop the escalating trajectory. The study showed that cancer caused 90 per cent of firefighter deaths in 2018, up from 85 per cent in 2015. These percentages in human suffering translate to 738 Canadian firefighter lives lost from 2009 to 2018, averaging about 74 per year. (For further details on this study, read “Reversing the cancer trajectory: Fight or flight” in the September edition of Fire Fighting in Canada).

This troubling direction has helped cement “clean cab” in the lexicon of apparatus conversation. But what does it really mean? What defines clean cab in absence of standard definitions provided by regulating bodies; the NFPA? This makes the biggest trend in clean cab figuring out just what clean cab means to individual departments.

From an apparatus industry perspective, Mike Thomson, a sales representative for Commercial Emergency Equipment, says he has seen a range of interpretations. These include exposure mitigation before crews re-enter trucks and a return to vinyl seats and other easy-clean surfaces. He is seeing isolated water tanks to clean the firefighters on scene, wash stations and removable seat covers that departments can buy multiples of and wash like turnout gear. Upgraded HEPA filters on HVAC systems, checker plate flooring and configurations that get electrical up off the floor level of the cab for ease of cleaning are also kinds of things gaining traction.

“Customers are much more open to these kinds of ideas because they are having the conversation,” says Thomson, who sees this as a very active conversation nationwide.

The most popular choices he observes are the shift to non-porous easy-clean surfaces and the move to much lighter interior paint colours that make it easier to see contaminates.

“These are very easy options to adapt that don’t mean you have to change your entire protocols. Making the jump to pulling the SCBA out is a real operational challenge for some departments, so it’s not easy to understand how you’re going to make that work quickly.”

At Richmond Fire Rescue in British Columbia, Fire Chief Tim Wilkinson has committed considerable energy and investment into clean cab for his department, which includes a successful transition to SCBAs outside the cab.

“First of all, for some of it we’re going back to the way things used to be with having air packs outside of the cab,” he says, and while staff try really hard to decontaminate at the scene, it’s not an exact science. “It is taking a very simple approach to a safety issue – what can you do by policy, what can and can’t be in a cab — and also looking at engineered solutions so we don’t just make mistakes and contaminate ourselves. Now we’re not going to buy trucks that come with air packs in the seat. We’re going to engineer that out.”

There is an operational objection known to arise when it comes to moving SCBAs outside of the cab: what kind of time will be lost having to put this equipment on at the scene? This is how Wilkinson counters this objection, and he says communicating the rationale behind change is key to gaining crew buy-in.

“While you are putting your air pack on, the officer is doing a 360 evaluation to have an incident action plan that is safe and not based on ‘run into a fire and try and put it out’. Firefighters get injured without a clear, cogent action plan. They need to take directed action, so while they are hustling to put their equipment on, it has really helped our officers to slow down, take good stock of the fire, understand it, understand the plan and then direct their staff to safely and effectively put out the fire.”

The department has also been using an AeroClave misting machine for the past several years that is incorporated like a sprinkler system inside the cab and plugged in from the outside so no one has to go in to begin decontamination. The mist is safe for electronics and surfaces, so anything contaminated goes into the truck for an all-in-one clean-up. While the truck is being misted, typically a 30 to 40-minute process, firefighters are showering and wiping themselves down. Wilkinson is working on slowly but surely equipping each station with an AeroClave.

“We’ve really taken what is a safety approach of how you reduce or mitigate a hazard, looking at the hazard, and then going through all the component pieces to lead you to as safe a situation as you can have.”

Wilkinson says his policies in action are cost effective and he has seen this born out in reduced sickness. Decontamination procedures are followed for everyone who may be at risk, including mechanics or a person coming in to do electronics repair. The staff are generally healthier and feel safer knowing that they are cared about, which is good for their mental well-being as well. He emphasizes that clean cab measures are part of the bigger pictures of health and wellness.

“We are better for sure with clean cabs but it can’t be just that. The problem is cancer and viruses right now. The solution is complex, and part of it is clean cab, but not all. We shouldn’t be happy with ourselves just because we have a clean cab.” 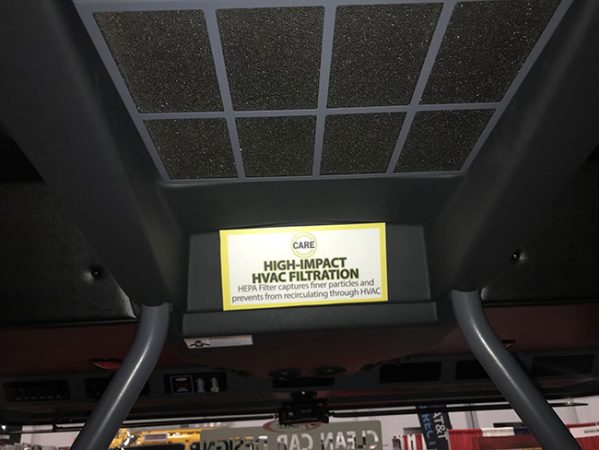 HVAC filtration will tackle the problem of contaminates in the air, not just on the surfaces.
Photo credit: Commercial Emergency Equipment

■ MAKING PROGRESS
John McKearney, fire chief for Whister Fire Rescue and president of the Canadian Association of Fire Chiefs (CAFC), has been in the fire service for almost 40 years, making him a long-standing witness to the evolution of the clean cab conversation. There was a realization that early decon initiatives and improvements in turnout gear safety weren’t making the impact they needed to on cancer rates, he says; there was still a gap and the conversation turned to clean cab.

“Now with COVID-19, it really hit home. We’ve got to get everything out of the cab. It’s going to cost a little bit of time, but it’s got to be done. It’s a complete shift of how we’re put together because everything is so predicated on turnout time. But there may be some savings in that you’re not putting it on at the front end…We’ve learned from COVID-19 that the more you have solid non-porous materials, the easier it is to clean, whether its contaminants or a biological material.”

Aside from surfaces, McKearney thinks the apparatus of the future will include more environmental controls inside it as well in the form of HEPA filter technology that cleans that air.

“This is something we did with two new fireboats we purchased around 2017. We ensured the cab had technology on it so the air could be cleansed before coming inside. That was a result of being at a Squamish wharf fire for many hours where the firefighters were just in the thick of this ugly creosote smoke.”

The fire service is making change and progress in adopting these available technologies, but McKearney says there is still an educational component happening. The concept of clean cab is not yet well understood, but he thinks it will progress initially with the cabs being designed easy to clean, then with the SCBAs and other porous material going back to being stored externally like they used to be, and then attention will also be paid to the storage of turnout gear, although he sees this as the lesser concern than the other components because most firefighters now know gear should be bagged and cleaned after a fire.

There is a lot for fire departments to think about, and McKearney encourages chiefs to work the with CAFC and their provincial associations for information about where clean cab is headed before that next big purchase so that your apparatus will be modern enough to be safe for your firefighters and remain relevant for many years to come.

■ PROGRESSIVE SOLUTIONS
Education and deep cleaning are important parts of the evolution towards the definitive clean cab, when and if that formal definition should arise. Clean Cab Canada is one company looking to close the gap with supportive services for fire departments. Clean Cab Canada, which specializes in apparatus decontamination, is a young joint venture between firefighters Dorien Bibault and Brad Milton. Both men started their careers as volunteer firefighters and became firefighters in the Canadian military over the course of decade and a half careers. Bibault and Milton were concerned with the cancer they were seeing in the military, and the lag between what departments had for existing apparatus and what was coming with present and future engineering. The firefighters see a concern about cancer increasing amongst their peers, but also lingering resistance to change. It can be difficult to create urgency and effect immediate change over a disease that takes many years to manifest. The results of change are not immediately clear, but the results of remaining unchanged are abundantly apparent. They see their service as a particular benefit to small departments.

“We can help educate those on different steps they can take to restore the apparatus and get it cleaned back up to standards,” says Milton, which includes providing SOPs they can action right away alongside the cleaning service.

Bibault adds, “It started with the deep cleaning, and then if we can also educate while we are offering the service that is what we would like to do. Education is really the primary goal. Not that we know better, but small rural departments with people working other full-time jobs just don’t have the time.”

The company provides a three-step clean, disinfect and protect process that can take anywhere from two to five hours, depending on the materials in the truck. Bibault says he sees the back of a fire truck being viewed more like the back of an ambulance now, with the understanding that it’s going to get soiled and the design needs to be easy to clean. While this is available now, he says it depends on when the department can afford new apparatus and, in the meantime, doing something is better than nothing.

Winter in Canada presents unique challenges, as these two firefighters based in northern Alberta well know. There sure won’t be any warmer climate open-air trucks roaming around alongside frostbite warnings. What is feasible for post fire decon in frigid weather is an ongoing conversation the fire service continues to grapple with.

Until industry standards come along, clean cab is an interpretive approach. Within this approach, best practices are well underway.

The bottom line when it comes to clean cab was noted succinctly by McKearney: “The composition of fire isn’t changing. It’s always going to be full of carcinogens. We have to find a way to purge that so it’s not in the cab.”