Do you ever feel like the world is testing you a little harder than others?

On Thursday, Oct. 29, I firmly believed that it was. 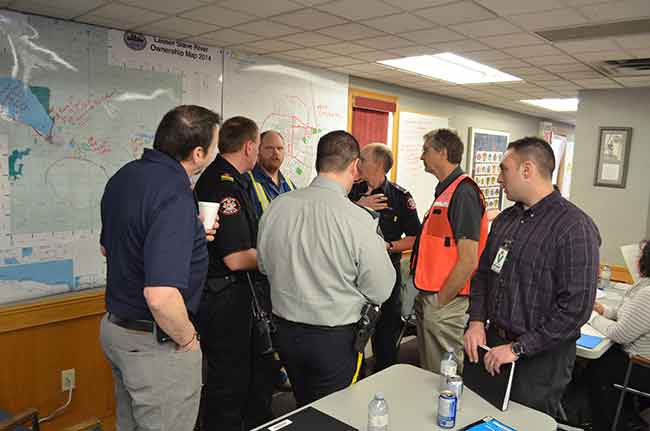 The outage required all agencies to communicate face to face An ordinary day for the Lesser Slave Regional Fire Service turned into a lesson in emergency management when phone and Internet service went offline in the community. By Fire Chief Jamie Coutts

The day started like so many others: up early for an MVC – a semi truck carrying 38,000 litres of gasoline versus a pickup truck at the intersections of highways 2 and 88. This is a disastrous intersection for us: too many lanes; too much traffic; and at 8 a.m., just a mess.

We respond with our trucks to the site and found that although the situation could have been horrible, it wasn’t so bad. The driver of the pickup had pulled out in front of the semi, the semi driver braked and tried to avoid the other vehicle.  The pickup driver was treated and released and the semi was only slightly damaged, leaking antifreeze.

Our crew cleaned up the scene, returned to quarters, cleaned up the trucks and the hall and went off to re-start the day. It was quiet until we headed back to fire hall after lunch.

No cell service, no Internet, no emails. The phone rang at the hall; it was a volunteer firefighter who said dispatch had used the call-down list and got to the Fs before reaching him (a Rogers network user). Alarm bells had been ringing at a local restaurant for 10 minutes now, he said. So we sent a responder to try to find out what was going on.

We tried our radio link to Grande Prairie dispatch; nothing. We picked up our phone and called; that worked. We had our administrative assistant relay to dispatch through this phone connection.

But now people were stopping at the fire hall. No one has cell service, land lines or Internet. We can call out, but no one answers our local calls.

“What’s our SOP for no phones?” someone asked.

“I don’t know, but we better figure out something fast.”

We put some people into trucks and sent them to the RCMP station, the hospital, EMS, forestry, the Town of Slave Lake office, the municipal district office and the nearby Sawridge First Nation.

At these sites, our people briefed staff, gave them radios for our local system and urged them to stay connected, look at their plans and help us figure out what was going on.

Our two daytime duty officers headed to the Telus office. After some searching we found a very unhappy Telus employee trying to figure out the damage to the system: a Telus contractor had hit a fibre-optic line during an underground boring attempt. Land lines, Internet and cell service would be out for between six and 12 hours.

On the way back to the hall we stopped and asked our radio people to set up a couple of satellite phones. At this point, the mayor had tracked me down and was looking for an update. I went back to the fire hall and came up with a plan to put fire trucks, police cruisers, ambulances and forestry trucks into the neighbourhoods – 10 in total.

The outage required all agencies to communicate face to face

The outage was widespread – more than 65 kilometres from one end to the other. We accessed Alberta Emergency Alert using a local staff member’s cell phone through a Rogers. We briefed all agencies in person and expanded the plan so that residents could access emergency responders through direct contact with response vehicles, or come to the RCMP station, hospital or fire halls. We made sure we had people out on the streets and in the rural subdivisions. We made sure we had radios at the stop-in sites. Crews were instructed that if anyone were to stop at the sites or the vehicles to report an emergency, the closest resources were to go immediately, followed by the agency most needed.

We set up our electronic signs stating the problem and the temporary solutions. These signs were purchased after the 2011 Slave Lake wildfire and we were lucky to have them. Our mobile units start talking to people on the streets and word spread about the situation. Representatives of the Town of Slave Lake and Municipal District 124 were talking face-to-face and updates were ongoing over the radios we had handed out. Alberta Emergency Alert was being broadcast over the local FM radio station and things were looking up. We looked at our Regional Emergency Management Plan but there was nothing in it for this type of event –which was sad, because this plan was new after the 2011 fire.

I can tell you that having no external communication system is like being Superman with all your superpowers stripped away. Everything you think of, everyone you want to talk to is gone; it felt like being a firefighter 25 years ago but without land lines.

After about four hours, Telus had fixed some of the lines. Later that night cell service was restored. Telus did a great job patching things together and trying to give us solid timelines, but as you can imagine, that was tough; there were 2,400 copper lines down and the best repair people can fix just 80 an hour. The company had to bring in a patch cord and people from Edmonton, which is 250 kilometres away, to fix the fibre-optic line. We finally got to bring people in from the field at 1:30 a.m.

Slave Lake had similar issues during the 2011 fire, but everyone was evacuated so it wasn’t a direct problem, and there was still some cell service. The same problems existed during the High River flood in 2013, but, again, people were gone and cell service was still available in some areas.

One accident had left an entire region without the ability to call 911. Our ability to communicate with the public and with other agencies was drastically reduced, using only FM radio, the Rogers cell network and private Internet providers.

My thoughts are simple:

By Monday, Nov. 2, service had been restored to 100 per cent of our region. I want to make sure we identify the risks, find solutions to make sure we are prepared, and congratulate emergency management and first responders for a job well done.

It’s funny to me that even during the incident emergency responders were asking me if I had set it up as a training exercise. At first I just laughed, but after a few asked the same question, I realized that for them to be that calm, to be able to make jokes, we must be ready for what comes our way.

Things have changed greatly since 2011, and I’m happy to say we are finally getting to a good place.