Last winter, a group of visitors from Toronto drove an hour and half northwest to Roseneath, Ont., to go ice fishing on Rice Lake and became trapped on the thin ice. When the call came in to the local station, members jumped into their ice-water-rescue boat and came to the visitors’ aid.

Everyone was safe, said Alnwick/Haldimand Fire & Rescue Chief Dave Wright, but it might have been a different ending without the rescue boat.

Station 3 in Roseneath purchased the boat in 2001 with funds raised by the annual Golden Beach Car Show. Every year the show, hosted by Golden Beach Resort in Roseneath, draws thousands of community members and visitors in support of the volunteer firefighters.

This year’s show on June 21 brought in $6,300 for the Roseneath Firefighter’s Association. Over its 23 years running, the fundraiser has helped the station, through the association, purchase a search-and-rescue boat, specialty nozzles and helmet flashlights.

“It’s a huge benefit for us,” Wright said.

Bob Jenkins, a radio operator for Station 3, said it was a busy day for the 15 Roseneath members who came out. The firefighters participated by running a 50-50 raffle, a firefighter challenge for children and, new this year, a bouncy castle.

“We don’t mind doing it because we know the money is going back to our association,” Jenkins said. “I’ve been doing this for five years now and it’s a worthwhile cause. 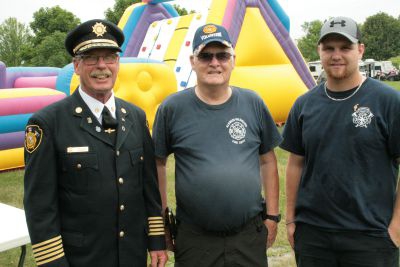