Editor’s note: Firefighter Daniel Botkin was killed after responding to a call at a log cabin manufacturing facility  in Enderby, B.C., in 2011. A shipping container on the property – the kind transported on ships, trains and trucks and used all over Canada for storage and other purposes – was exposed to the on-site fire. During overhaul, the container exploded and the doors blew off; one struck and killed Botkin. As Don Delcourt writes, British Columbia’s fire service wants changes made to the structure of the containers and regulations that govern how containers are used and stored. 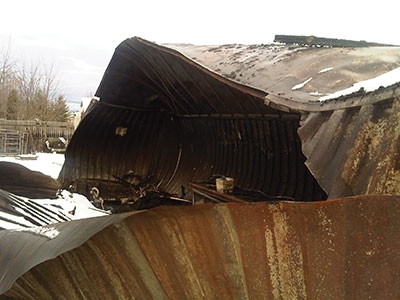 When a shipping container exploded in Enderby Editor’s note: Firefighter Daniel Botkin was killed after responding to a call at a log cabin manufacturing facility in Enderby

A tragic event on Dec. 29, 2011, mobilized the British Columbia fire service to find out more about the dangers of shipping containers. Now, after two investigations and a lot of research, the province’s fire chiefs want to make the fire service aware of the possible hazards of containers and work to ensure that Ottawa and the provinces regulate their use.

The line-of-duty death of Capt. Daniel Botkin, a volunteer firefighter in Enderby, B.C., was a wake-up call. Until members of the Fire Chiefs Association of BC (FCABC) started digging for more information about shipping containers, the general perception was that because the boxes are structurally strong – built like tanks – they posed no fire risk.

But the investigations into Botkin’s death concluded that the exposure fire at the log cabin manufacturing site caused small volumes of flammable liquids inside the container to pyrolize, forming explosive vapour mixtures that detonated with sufficient force to cause the container to rupture or explode. The lack of any significant venting and the general conditions of the outside of the unexposed sides of the shipping container gave the firefighters no sign that there were hazardous conditions within the shipping container, until it failed.

The investigations and reports into Botkin’s death by the BC Office of the Fire Commissioner and WorkSafeBC concluded that the presence of as little as half a litre of methyl hydrate or one litre of mixed chainsaw fuel, along with the exposure fire, caused the incident.

The detonation tore the steel container roof along most of the 12 metre length of the container facing the exposure fire, sheared the eight steel door hinges, and folded the two 113-kilogram doors in the centre and ejected them from the door assembly.

The WorkSafeBC report and the FCABC position paper (available at FCABC.ca) provides more detail on the specifics of the incident; the WorkSafeBC site (WorkSafeBC.com) has a copy of the detailed investigation and an excellent slideshow/animation of the incident.

On April 23, 2013, in Saanich, there was another shipping-container incident at a construction site. A leaking propane barbecue stored in a secure shipping container exploded at the start of the workday when the electrical supplies for the containers were connected. Parts of the container roof landed about 200 metres away, the walls were flattened and the adjacent containers were heavily damaged. Luckily no one was seriously injured in this incident.

After these incidents, a fire chief in one of British Columbia’s smaller communities had his staff try to determine the shipping-container risk in his area. Staff found seven properties on which there were shipping containers used for storage; four contained significant volumes of flammable liquids or flammable compressed gases.

There seems to be a perception that shipping containers are a good place in which to store equipment and fuels because they are strong and secure. The research found that besides conventional storage, containers are being used:

But with the right fire conditions, structural strength and a tight, secure, enclosure can make shipping containers dangerous to the fire service and the public.

The only venting in shipping containers are groups of nine small holes – of between three millimetres and six millimetres – in the corners that act as air-equalization vents so that the container does not bulge or cave in during changes in ambient temperatures (plus or minus 20 C to 30 C). The holes are protected by external covers that prevent the entry of water. The small size of the holes and the external cover make them a poor indicator of the internal conditions of the containers.

A 1977 United States Coast Guard report on the Fire Performance of Intermodal Shipping Containers indicated that the small venting area of the air-compensating vents of a closed container caused internal slow growth fires to vitrify or smother themselves.

The fuel analysis of the Enderby incident showed that methanol had a vapour density at normal conditions of 1.1 compared to the 1.0 for air. With the higher air temperature at the top of the container where the methanol was stored, the methanol vapour could have been buoyant. Methanol has a flammable range of between six per cent and 36.5 per cent compared to 1.4 per cent to 7.6 per cent for gasoline. The analysis showed the conditions for the ignition and detonation of the gasoline and methanol were plausible. Some rough calculations of the maximum unvented pressure in the container were done during the analysis and the half litre of methanol and the one litre of gasoline could have created internal pressure of greater than 700 kilopascals or 100 pounds per square inch.

The research also indicated that some jurisdictions in Canada, the United States, New Zealand and Australia had recognized these fire-safety issues associated with shipping containers and had put in place bylaws or other regulations for use of containers.

In most of the jurisdictions reviewed, the key governance measure was to define and declare shipping containers as buildings; therefore, when they are used for purposes other than the transport of goods, they can be regulated.

Once containers are regulated, then their location, use and contents can be dealt with to help ensure fire safety for the public and firefighters.

In Canada there is no national standard that controls or defines shipping containers as buildings when they are not being used to transport of goods, but Saskatchewan and Ontario have their own regulations.

In Saskatchewan, under Bulletin A19 Saskatchewan Building Standards Advisory, a shipping container is considered a building when it: is no longer used for the shipping of freight, is placed on a property either temporarily or permanently, and is used for any shelter or occupancy.

In 2002, an Ontario court determined that a shipping container used for the storage of goods on a private property in Mississauga was a building based on the Ontario Building Code. Subsequent Building Code Commission hearings have ruled similarly.

In British Columbia, a shipping container is defined as a building only if it is on a foundation and has been modified with, for example, conventional doors, windows or an electrical supply.

The FCABC has concluded that in order to improve the fire safety of shipping containers, the fire service must work to change legislation to

The FCABC position paper, draft bylaw and standard operating procedures (on our website – fcabc.ca) provide some of the details that fire departments may want to use.

Shipping containers are very useful as structures or buildings, but the tragic loss of Capt. Botkin showed that when a series of unforeseen conditions occur, containers can be a hazard. In order to prevent similar incidents, the fire service must work to communicate to our own members the potential fire hazards of shipping containers and change the way that containers are regulated.