The Canadian fire service is all hands on deck in this pandemic with a focus on delivering service while maintaining member and public safety. 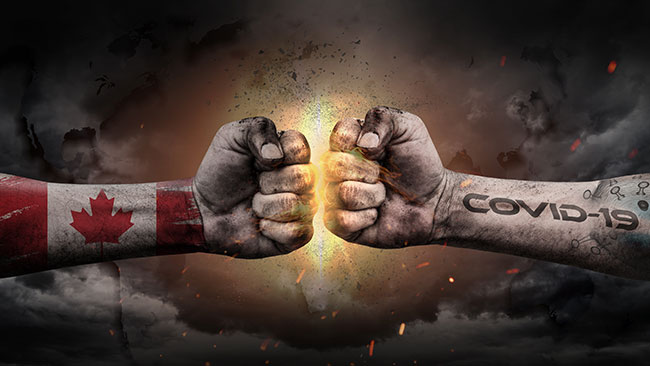 In the wake of the global pandemic, fire departments across Canada have been rising to the occasion and doing what they have been trained to do: face the crisis head on.

The novel virus — severe acute respiratory syndrome coronavirus 2 (SARS-CoV-2) — appears to have originated in a seafood market in Wuhan, China last year. The resulting disease, known as COVID-19, became a global crisis. The World Health Organization (WHO) declared the virus a pandemic on March 11. Federal governments around the world closed borders and asked citizens to isolate themselves at home. Soon, many provincial governments across Canada declared the outbreak a state of emergency and prohibited non-essential work. These measures were put in place hopes of flattening the curve of new infections to save lives and prevent overloading the healthcare system.

Each province and territory reacted to the outbreak in various ways at different times and fire chiefs across the country worked to sort out how to minimize the risk of infected individuals to their members, work with available PPE in light of shortages and remain ready to serve their communities.

“A pandemic offers some unique challenges to the fire service,” said Dan Derby, president of the Fire Chiefs’ Association of British Columbia and regional fire chief for Kootenay Boundary Regional Fire Rescue. Derby spoke to Fire Fighting in Canada during in a Dräger-sponsored podcast recorded on March 17.

As all-hazard responders, firefighters play a significant role within the healthcare system. In addition to following the directives given by public health officials, departments must also make decisions and adjust their service models based on various factors including the size of the department, work schedules and the severity of the situation in regards to both the population, the number of infected individuals in the jurisdiction and possible exposure risks.

“We’re very good at making decisions and taking direction in a very structured approach to Incident Command and we’re now blending in health authorities and allowing them to lead the discussion,” Derby said in the podcast. “With provincial and federal governments providing oversight and direction, this is a time for us to morph and learn and grow in terms of how we support our communities because that’s ultimately our goal: to support the community and ensure that our members are safe when they respond to the needs of the community.”

As the novel coronavirus began spreading across the country, so too did its many ramifications. Many anticipated fire industry events were cancelled. Departments suspended training, many opting for virtual training where possible. In-person public education in the community was halted and fire safety discussions were focused online. Departments grew extra concious of their PPE and staff resources with the anticipation of firefighter shortages due to isolation requirements and sick time.

In the weeks following the pandemic declaration, fire halls began closing to the public and several fire service members across the country went into self-isolation or quarantine after travelling or coming into contact with a potentially infected person. This included stations in Winnipeg, Saskatoon, Halifax, Langley and Coquitlam, B.C., and Newmarket, Ont. As of April 1, firefighters in Montreal, Toronto/ GTA region had tested positive for COVID-19, as did a district chief in Ottawa.

Decisions were being made amid an onslaught of new information, which often changed daily. Chief concerns around firefighter safety, PPE shortages and staff shortages led various departments to alter their protocol for responding to medical calls.

Using the same protocol that was put in place during H1N1 and SARS outbreaks, New Brunswick and Nova Scotia fire departments decided to respond only to medical under certain conditions, such as necessary auto extrication in Nova Scotia. Similarly, in Montreal it was decided that only ambulance workers would be dispatched to respond to medical calls.

British Columbia’s provincial health officer Bonnie Henry issued a directive on March 31 that ordered the province’s firefighters to stop responding to all but the most dire medical emergency calls for the duration of the pandemic. This included not attending to most overdoses. Comparably, in Thunder Bay, Ont., firefighters were instructed to cease administering naloxone kits at this time.

Aside from restricting medical calls, some departments have also adopted and enhanced other safety protocols in response to the pandemic. In early April, after 80 per cent of firefighters surveyed by the union supported the change, the Calgary Firefighters Association announced firefighters would begin working 24-hour shifts in order to limit the number of people in fire halls.

Processes like recording temperatures and screening firefighters when coming and going from duty began to be implemented in departments.

Some first responders were taking on roles they aren’t typically required to fill. For example, firefighters in La Tuque, Que., were deployed to staff checkpoints set up to protect the regional population. 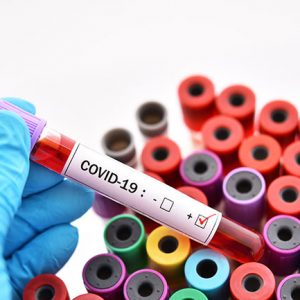 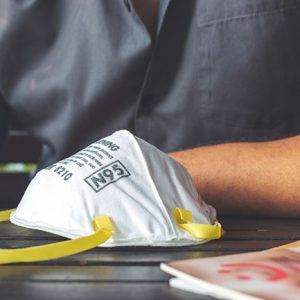 Canada’s fire chief associations have stepped up to collect and distribute the most accurate and up-to-date information to departments. Derby said it’s important to keep lines of communication open and to respect everyone’s place in the chain of command during this type of event.

“[The Fire Chiefs Association of B.C.] initiated a COVID-19 committee to provide factual, timely information to our members to ensure that they have the information that they need in a consistent format, and to make decisions on service delivery that they have to make at a local level,” he said on the podcast. “We’re not telling our members how to deliver their service, we’re empowering them and giving them the best and most accurate information that we can in a timely fashion from the right resources and health authorities, the provincial government and the federal government, to allow them to make the decisions that are right for their communities.”

Whistler, B.C.’s Fire Chief John McKearney is president of the Canadian Association of Fire Chiefs. McKearney spoke with Fire Fighting in Canada on a podcast sponsored by Fort Garry Fire Trucks in late March. He accentuated the importance of government agencies in understanding that fire departments plays a significant role in healthcare.

“We are bringing it forward to the Public Health Agency of Canada that firefighters across our country have to be viewed as part of the healthcare system and have to be able to get the right equipment in order to ensure that the other parts of the health community are not overburdened unnecessarily,” he said. “We are part of that that equation right now.”

Some unions, like Winnipeg’s firefighters’ union, are calling for a complete separation of emergency services and are calling on municipalities to ensure workers’ compensation claims are streamlined during the COVID-19 crisis, especially in light of an increased need for PPE that had not yet been met. Concerns around PPE shortages are widely shared.

“The biggest issues are going to be access to PPE and cycling people through if firefighters become infected or exposed,” said Cynthia Ross Tustin, president of the Ontario Association of Fire Chiefs (OAFC) and the fire chief in Essa Township, Ont. “Our biggest concern is the exposure of our firefighters and their ability to come to work healthy.”

On March 3, the World Health Organization (WHO) warned of a global shortage of PPE and began calling for an increase in manufacturing to meet demands by 40 per cent. On March 31, Prime Minister Justin Trudeau announced a government commitment of $2 billion to help buy PPE for frontline workers. Public Safety Canada issued a survey shortly after pertaining to critical infrastructure owner/operator needs that fire chiefs could fill out.

“It’s vital for the decision makers at all three levels of government — local, municipal, or provincial and federal — to understand the depth of abilities in firefighters across our country,” said McKearney. “They see it whenever a crisis strikes but I think it gets a little deaf in non-crisis time periods and so we’re taking this opportunity to remind our ministers and federal government and provincial government that firefighters are here, they’re a valued resource in the community and to please not forget about them. They are they are on the frontlines and they need the right equipment.”

Ross Tustin is also calling for more action by governments to protect firefighters. She said she is in communication with the solicitor general and Ontario’s fire marshal on a daily basis to ensure the association is armed with the most up-to-date information. The OAFC then distributes this information to departments.

“We [associations] are sharing information and consistently advocating for firefighters directly to the government,” she explained. “In our conversations, we are voicing our concerns about the shortage of masks and the need to have the legislation that protects the emergency services equally, like they have put in place for the healthcare workers.”

On April 6, the Ontario government issued a province-wide emergency order allowing first responders, including firefighters, the ability to obtain COVID-19 positive status information regarding individuals they come in contact with while on duty.

Vince Mackenzie, the fire chief in Grand Falls-Windsor, N.L., is a board member for the CAFC. While Mackenzie asserts that it’s a very broad spectrum in terms of what the pandemic means and how it is affecting each department, it’s up to municipalities and individual departments to become knowledgeable and adjust their service accordingly.

“All emergency services are affected and are vulnerable right now,” he said. “Emergency managers are always trying to raise awareness to public officials about what can really happen but this is unprecedented; there’s no play book for this one. It’s something we’re going to learn as we go.”

Provinces, particularly in Western Canada, are also grappling with how the crisis will affect the upcoming wildfire season. Training shifted online and wildfire training events, like the Wildland Urban Interface Training Symposium, were cancelled. However, the BC Wildfire Service said wildland firefighters will eventually need to train in person to properly prepare firefighter teams for upcoming deployments. BCWS said safety measures are being organized and proper precautions are being put in place to ensure the protection of their firefighters.

Mental health is also at the forefront of concerns for first responders, who are already susceptible to PTSD and other occupational stress injuries due to the nature of their work. While the full scope of the impact of COVID-19 on first responder health — both mental and physical — has yet to be determined, firefighters are facing risk and across the nation are rising to the occasion.

“We’ve seen it time and time again, every time a major catastrophe or crisis comes about, all first responders step up,” said McKearney in the podcast. “There’s no question in my mind that tomorrow firefighters will take on even greater responsibility and greater skills and certifications in order to adapt and manage whatever comes to their community.”

Trained to handle biological types of emergencies and serve as a vital part of the medical chain, firefighters continue to offer services while departments make the necessary adjustments to keep everyone – including their own team of firefighters – safe while Canada attempts to contain COVID-19.

“This will be the time when you’ll see the fire service shine,” Mackenzie said. “Canadians will realize that all emergency services, and the fire service in particular, will be highlighted because we are built for resiliency. We are built for worst case scenarios. We are critical thinkers and we’re the ones to call if everything goes sideways.”

Editor’s Note: The COVID-19 pandemic is changing rapidly. The details cited in this article were most accurate and relevant information available at the time this issue went to print in April. For more coverage, visit firefightingincanada.com.