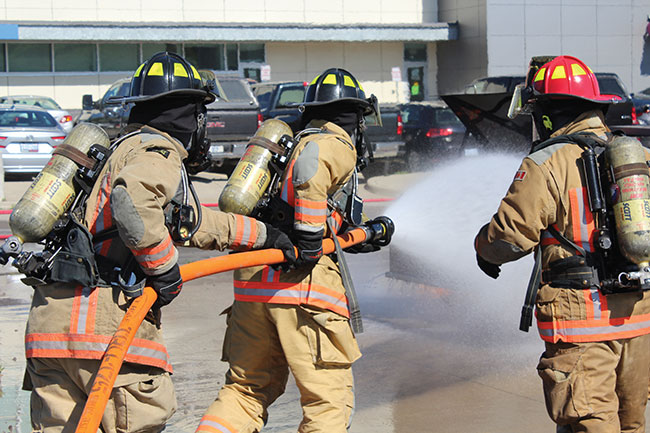 Despite unforeseen challenges this year, recruitment and training remain a priority for many departments. PHOTO Credit: Hamilton Fire Department

At 6 p.m. on Oct. 22, Barrie Fire and Emergency Services held their second virtual recruit information session, exemplifying one of the many ways Canadian departments adapted their recruiting and hiring practices during the pandemic. Over 250 people attended the session to learn more about joining Barrie’s career department.

■ Vetting by video
Barrie, Ont., is a city of about 150,000 in central Ontario employing 187 career fire fighting staff across five divisions. Management was actively recruiting in autumn for the purpose of hiring 12 new firefighters by 2021. After applications closed in October, two interviews were conducted—the first virtual, the second in-person—with the intention of providing job offers by December. Successful candidates are expected to report by mid-March for training, and start on shift by July 1. Barrie Fire Chief Cory Mainprize said 2020 was not a “growth year”; the available positions are to fill vacancies.

The Oct. 22 session aired Barrie’s 2020 recruitment video and provided information about the department. Considerable time was also dedicated for questions from attendees, which included inquiries about growth and analytics of the department, hiring and training process and the projected start date for successful candidates.

Brampton, another Ontario career department, serves a population of about 735,000, has 13 stations and about 550 staff. The Brampton fire department conducted similar recruitment strategies through virtual information sessions to attract a diverse audience. They also introduced a new online situation judgment test, a written exam that test applicants on their response to job relevant situations.

“This is critical step to ensure we have the most competent candidates proceeding to the next stage of selection: the Standardized Behavioural Interview, which is another strong predictor of performance with minimal adverse impact across gender and racialized groups,” said Brampton Fire Chief Bill Boyes.

Boyes and Mainprize also noted once recruits are hired, the rigorous sanitation practices and physical distancing will likely continue for spring training.

“Obviously, if we’re still in the physical distancing stage when recruits start training, we’ll make adjustments and do our best to accommodate that,” said Boyes. “We’ve also introduced a daily screening process and have ongoing medical evaluations for staff and so far, we’ve had success with it.”

While the pandemic has generated many challenges, departments continually work to adapt to new health protocols. Several chiefs have, like Mainprize, turned to virtual forums as a means to distribute information to potential recruits.

Though Brampton only plans to hire about 20 new firefighters, over 600 people attended their last online career information session in October. Boyes deemed it a success.

“One of Brampton’s greatest strengths is our diversity,” he said. “We really wanted to be as transparent as possible, so this year our recruitment campaign was designed to appeal to people from diverse backgrounds who may not traditionally have seen themselves pursuing a career in fire. We wanted to convey the message that anyone looking to start a career in fire fighting is invited to explore opportunities with our team regardless of their background.”

■ Vying for volunteers
Deputy Chief Jay Plato of the volunteer Niagara-on-the-Lake Fire Department in Ontario said their recruitment process is rigorous and includes a 300-hour, eight-month training program. Their last class was hired in late 2019. Recruits had almost finished their training when COVID-19 hit Canada so the process was put on hold and the recruits are only now completing the process.

“We’ve worked hard to connect with local public health officials for information so we could come up with a plan for training while keeping recruits engaged and healthy,” said Plato.

Ontario’s North Algona Wilberforce volunteer fire department is actively attempting to recruit two new members; a process Fire Chief Kevin Champ said is often arduous due to the rural town’s small population and because many people often can’t respond to day calls due to full-time jobs. Though the town is only home to about 3,000, Champ said their geographic coverage area is extensive. The department has 43 fire service members, two stations and a remote substation.

“We’re typically recruiting all the time,” he said. “If someone shows an interest, we have them come out to a couple of our training sessions and if we want to work together, we generally give them an offer right away.”

■ A composite approach
Hamilton, Ont., has an amalgamated service and is a composite department with 26 stations. It serves a city of over 766,000.

“Our recruitment is quite robust because we have a lot of ongoing needs right now,” said Helen Klumpp, an executive officer with the City of Hamilton.

Hamilton usually hires two recruitment classes per year. In March, their volunteer recruitment session was disrupted and then cancelled. The department was able to continue recruiting for career positions for their January 2021 class.

“Recruiting volunteers proved difficult to coordinate because recruits are spread across all the stations [based on where they live],” Klumpp explained. “In career, we just often receive a large pool of applicants who aren’t restricted by where they live so it’s more about choosing applicants with certain specializations, then placing them at stations where they’re needed.”

To compensate for recruiting challenges the pandemic posed, Hamilton added online components for human relations assessments, which, Klumpp said, were “very successful.” They also held interviews and psychological assessments that were completed with a combination of in-person and virtual components.

“Once the recruits came in, we also changed the way we formatted the 16-week training process,” she said. “We had to juggle things around and decided to move our usual online training components up in the schedule; we did those first and that worked out nicely.” 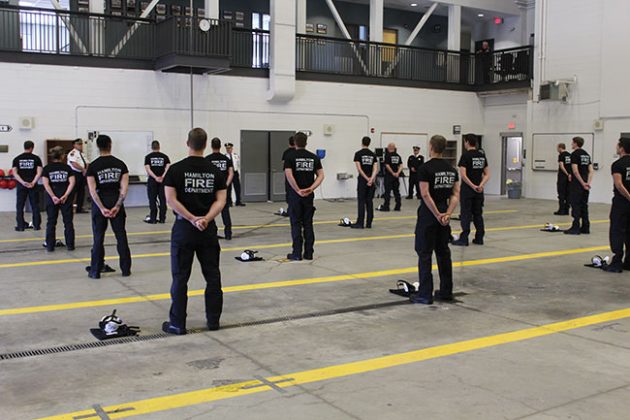 ■ Attracting diversity, being inclusive
Barrie’s Oct. 22 session was the department’s second online recruitment meeting. They previously co-hosted a session with the Fire Service Women of Ontario (FSWO) on Oct. 7 that provided information on recruitment and FSWO membership; 60 people attended.

The desire for more diversity and inclusion within departments coincides with a new report from the Canadian Association of Fire Chiefs (CAFC) titled “A Fire Service for All: Exploring Ways to Further Diversity and Inclusion for Women in the Canadian Fire Industry.” The report summarizes feedback from a September 2019 meeting with the purpose of providing awareness of areas that need improvement and includes recommendations at the local, regional and national levels.

Canmore, Alta., fire chief and CAFC board of directors member Keri Martens is one of the founding members of the CAFC’s Diversity and Inclusion Committee and helped write the report (available at CAFC.ca).

“So far, the feedback from the report has been has been really positive,” Martens said. “From the recruitment perspective, we need to change the physical image of what society thinks of as a firefighter. We can’t just talk about diversity, we have to work to show it.”

“I think people need to take a really hard look at what their recruitment policies are and how decisions are made and how departments can make themselves attractive to a diverse group of candidates.”

Martens said one of the main goals of the CAFC Diversity and Inclusion Committee is to encourage departments to reshape their message to help everyone to feel part of the conversation.

For example, Barrie and Brampton both launched social media campaigns and produced recruitment videos that illustrate a diverse fire service and have held virtual recruiting sessions aimed at various demographics.

“The thinking behind [the virtual sessions] was to make sure we reach as many people as possible,” said Mainprize, who noted most recruits in the past tended to be Caucasian males aged 23 to 31. “We certainly encourage non-traditional candidates apply. Sometimes the biggest barrier can just be lack of information and we know the sessions help combat that.”

Boyes said his department is also actively trying to appeal to more diverse applicants. He explained that Brampton is somewhat unique in that they provide 18-month conditional offers to recruits, meaning when an individual is offered a job, they have 18 months to complete the required fire fighting certifications. He said this has been an immense aid in attracting candidates with varying backgrounds and skillsets who may not have considered firefighting.

“A main focus of our most recent master plan, recently endorsed by Council, is the diversity and inclusion component because our ultimate goal is to be more reflective of our community and give anyone interested in fire fighting the opportunity to apply.”

While there is a strong focus across Canada to attract diverse candidates, departments must also consider the culture within their own departments.

“Many focus on diversity and inclusion during recuitment but the work can’t stop there,” Klumpp said. “We need to change the culture we’re bringing people into.”

“Traditional station designs, resembling community centres or male locker room facilities, offer very little privacy or modesty for any of our staff and so we’re trying to update the layout to make them more ‘people-friendly’,” he said, noting he wanted to ensure potential candidates were aware of the adjustments being made as an effort to break down barriers and encourage people who may have been previously deterred from joining the service, to apply.

“We’re just looking to hire good, compassionate and empathic people who care about our community and that have a desire to work hard and problem solve,” he said. “Our focus is completely on hiring people who embrace our values and we’ll teach them the rest.”