January 2016 - We had just finished a two-week drought – zero calls for the Lesser Slave Regional Fire Service in Alberta. It was Friday night, Nov. 15, and we were all talking about how people must have settled down and we were finally going to enjoy some quieter times. A couple of hours later, at around 6 p.m., we were paged to a confirmed fire at a single-family dwelling. Off we went, loaded up our initial attack truck with a few guys and blazed over, loaded up our ladder truck and tried to find a spot, and finally took the main fire truck and a few extras in a pickup. 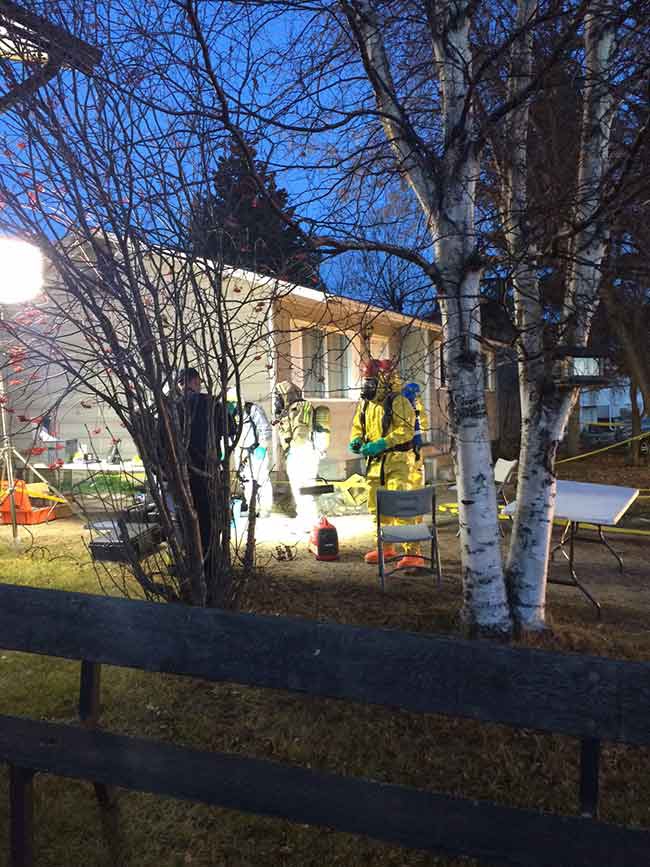 Upon arrival, the B/C corner of the house was lit up. The fire was into the roof trusses and the back corner was fully involved; the first-in truck hit it quickly while the ladder truck tried to find a way around all the trees. The last crew pulled in and we started to win a little.

RCMP were on scene and we were immediately told there was no one in the house – they evacuated when they smelled smoke. Crews were sent in and the battle continued from the inside out. The back door was black and buckled, and there was a pour burn on the back floor. This door was also shut with a 2 x 4 screwed to the floor and a 2 x 4 up to the handle. (Extra security, hmmmm.)

As the fire dimmed we started to get our first look at the house and the heavy drug-use paraphernalia lying around. As crews did their thorough secondary search they reported extensive baggies, needles and pipes. We headed downstairs to look at extension in the back corner and water damage downstairs. More drug paraphernalia was found.

We called for the RCMP and asked for members downstairs. We moved what we could out of the water and noticed a blue bin that looked odd and out of place. As we started to move the bin, the lid came half off and a strong chemical smell wafted out. A quick look confirmed our fears; we sealed it up and bailed out. The RCMP were notified and an investigation began.

The fire was now out and RCMP would watch the house overnight while we got warrants for fire investigation and for the material found in the house. We have an excellent relationship with the RCMP so we formulated a plan and officers called K division in Edmonton to start lining up the drug team.

Saturday morning brought news that we would be investigating the fire as arson, and the RCMP would handle the drug investigation. We were asked to support a rapid intervention team for hazmat and the decon line and people. We have this training and equipment and were quick to help. While we set up and waited for the RCMP drug team to arrive, a strong northwest wind (45 kilometres per hour) picked up and, sure enough, a little bit of smoke started to rise from the attic space.

Rekindles are not my favourite, as they mark a job left undone. We were waiting for warrants and didn’t want to enter the house. We paged a firefighting crew in and tried everything in our power to extinguish the fire from the outside but it was stubborn and wouldn’t go out. The problem now was that we had to go in before things turned into another real issue for the homes on both sides. We were given permission to enter the upstairs only, to extinguish the fire, again.

Once the fire was out, and with warrants in hand, we could start the rest of the process. The fire investigation was handled by two investigators, and the RCMP drug team members entered the basement to gather their evidence. Our hazmat team members were on standby and helped where they could. What should have been a daylight operation quickly turned into a full-night operation – pitch black, – 7 C, and a dozen people who were trying to finish up. The RCMP members catalogued their evidence and packaged everything for shipping; we deconed them and helped to pack up.

I don’t really know what was in the basement and we were told it would take months of testing to determine if it was a small meth lab. As for the arson, it is under investigation and will move itself along. The neighbours in this area all knew something was up with the house, but when we pulled up I would have never thought that something such as this would happen in our little region. (I guess I should know better by now!)

Interestingly, the following Tuesday we had planned a crystal-meth training session with all our protective-service partners; 35 people were signed up for the classroom session and the live exercise. We went ahead with the training and everything we witnessed that Friday night makes great sense now. Our firefighters needed to get some training and understand the risks.

Whether you’re in a big city, small town, or an acreage in the middle of nowhere – all the same risks can apply with a small crystal meth lab.