Department needs across Canada can be as diverse as the country itself. As the nature of the service continues to change, and fire crews respond to more medical and rescue calls, municipalities are adding features to their apparatus that address community-specific needs. 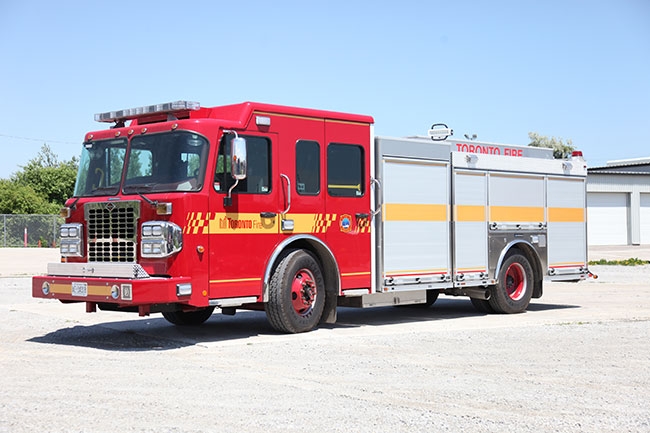 Community needs, climate and surrounding geography can affect which features are paramount when management is buying a new truck.

In recent years, fire truck manufacturers and sales people are seeing a greater demand for dual-purpose trucks in many of the rural and volunteer composite departments. Like its departments’ firefighters, the vehicle must wear multiple hats.

“You see now more of a push towards a pumper/rescue, or a tanker/pumper,” said ResQtech operations manager Kyle Innes. “Instead of specializing it, you’re making a current apparatus to serve more of a dual purpose.”

Todd Finnie is the general manager of Carrier Centres Emergency Vehicles, which is the Ontario dealer for Metalfab fire trucks, parts, and services. He says dual-purpose vehicles are one of the best ways small departments can get “the best bang for their buck.”

“The biggest driving force that I see is [the] dollars and cents that are available to municipalities,” Finnie says.

Brian Nash, national sales manager with Fort Garry, says the desire and demand for custom chassis is high, but so is the cost.

“Well I’m sure every department would love a custom chassis, but it’s a price point thing too, those custom chassis ballpark at a minimum of $100, 000,” Nash says.

Duane Antle is the fire chief in Come By Chance, N.L. He heads a small volunteer department that has two trucks in service: one 2002 pumper/tanker and a new 4×4 pick-up truck.

With a small budget, he says he needs to be very deliberate with purchasing choices. Not only does he need to take into consideration his community’s needs, but also the needs of his mutual aid partners. When it does come time to purchase, the vehicle needs to serve multiple purposes.

He says this helps Come By Chance and surrounding departments save money on truck buying together.

Located on the east coast, Antle says that corrosion is a huge issue for his trucks due to the proximity to the Atlantic Ocean. ResQtech’s Innes, this corrosion protection is becoming a must-have for departments.

“The big thing we’ve seen is a push towards better corrosion protection on fire trucks. So what we’re seeing a lot of are requests for galvanized frames,” Innes says. “In the past they were painted, but due to corrosion issues, oftentimes that’s kind of dictated what the life of the apparatus will be.”

“If I were to buy a new truck today, I would ask for an aluminum or stainless steel body,” Antle says.

Unlike the department in Come By Chance, Iqaluit Deputy Chief Nelson Johnson says the small northern city of 8, 000 residents has no mutual aid and only one fire station. The station runs both the fire and EMS services with one quint, one engine, and two ambulances.

Like many Canadian departments, the cold is a big factor when purchasing a truck. This means winterized features packages that may include enclosed pump panels, heat tracing on piping systems, pump heaters, enhanced insulation, and automatic tire chains for traction in snow and ice.

“No. 1 for us here is cold weather capabilities. Is the pump panel enclosed? Do we have a good heat source? Is the pump all enclosed? Does it have a heater? Do the drains freeze on us?” Johnson says.

Iqaluit has a unique set of difficulties when it comes to buying trucks because the city is located very far from distributors. This means the department has to put a lot of time and consideration into initial inspections, travel costs and shipping, Johnson says.

“We actually have to go to the mainland to do our final inspections before it gets shipped to us…The average for us is about $2,000 just to go there one way and back. That’s a huge cost for us just for that travel.”

In order to avoid long wait times, Iqaluit tries to purchase what Johnson calls “off the shelf trucks.” If an issue with the vehicle occurred, they would have to take the truck to a local garage for repairs so they can have it back on the road quicker.

“We can’t wait for parts to be shipped out of the States . . . so we try to avoid customization,” Johnson says.

Much further south at Toronto Fire Services, customization is key.

Rob Anselmi is the division chief of mechanical maintenance in Toronto. He says most vehicles are specialized and don’t serve the same dual purpose as many apparatus in rural departments do. Toronto has the largest fleet in the country, which includes 30 front line aerials, engines, 55 pumpers, 28 rescues, two highrise trucks, two staffed hazmat trucks, and even two fire boats.

“We probably have more specialized stuff than a lot of smaller towns do,” said Anselmi. “A lot of departments are forced to buy a truck that is a command vehicle and a haz truck and a bit of a heavy rescue.”

While budgets may not be as tight as smaller rural communities, Toronto has to deal with tight city streets.

Anselmi says he is always looking to make things smaller when designing a new custom truck.

“Believe it or not, I buy them with as short a wheel base as I can just for that reason, for driving downtown,” he says. “If you look at a New York truck, who has the same problem as we do but times 10, you’ll notice they’re very cut off. There’s no corners at all. They cut the angles off the steps up the back, they cut the angle off the front of the bumper. But if you look at our [trucks] compared to anybody surrounding us, or any rural [department], we’re way smaller.”

Fire departments across the country have to meet different community needs within different council budgets. This impacts every Canadian department

and as a result

the truck features they consider when purchasing are also affected.

Unlike the department in Come By Chance, which covers 30 minutes each way on the Trans-Canada, Anselmi says Toronto’s custom trucks rarely have to drive very far. But what the trucks lack in mileage, they make up for in constant stress, causing wear and tear.

“If you take a 78,000 pound tandem-axel aerial truck and do three-point turns in it all day, that causes massive issues with it,” he says. “A system like that is made to be on the highway like a transport truck.”

The city has four rivers running through it: the Assiniboine, La Salle, Seine and Red River. There are also a number of small retention ponds that crews are often called out to.

Instead of attaching a rescue boat to the back of the rescue vehicle, the boat is stored inside the truck.

“These two new water rescue units actually carry Zodiac boats inside the back cab that can be deployed quickly,” Wallace says.

The department does not have a station with riverbank access. This means that prior to the custom rescue boats, crews had to drive to a launch point and drive up the river to an incident. Now rescuers can drive directly to the closest bank to the incident for quicker deployment.

“Those two vehicles were designed very specifically with our topography in mind.”

Another important consideration for Winnipeg is the extreme climate. Most Canadian cities need to winterize their fleets, but in Winnipeg this may mean more robust cold weather protection.

“The only difference I think in Winnipeg is just the extremes of our climate. We’ll go from -30 C in the wintertime to 30 C in the summertime.”

“Some of the things we’ve incorporated over the years are covered pump panels, so we’ll have roll-down doors that cover our pump panels that are on the exterior of the vehicles.” He says exterior truck compartments are heated.

The most recent engine purchases have more robust ventilation in the cab, which Wallace says helps to mitigate fogging. He says crews reported that the windows of previous trucks would fog up when firefighters got back in the vehicle after wet, snowy calls during the winter.

“They couldn’t even leave the scene until they could get it scraped off,” he said.

Very few parts of Canada don’t require winterization packages on their fleets. But there are a few exceptions out on the west coast.

“In the lower mainland of British Columbia, typically those departments don’t need to winterize their trucks as a department in Ontario would have to or Alberta,” says Wayne Stephens, vice-president of Safetek, Canada’s dealer of Smeal apparatus.

On Vancouver Island, crews rarely have to deal with snow and extreme cold.

However, due to rain, some of the rescue units in Comox, B.C., are equipped with pop-up tents for vehicle incidents.

Instead of buying heating packages, Comox Chief and Fire Fighting in Canada columnist Gord Schreiner, looks at custom ways to cool down his members and keep them safe.

Schreiner added external detox-misting systems to a few of the department’s most recent purchases. The system is mounted in each side of the vehicle and mists firefighter with cold drinkable water, allowing them to cool down faster after a response.

He said it cost his department about $500 per side, which is a relatively inexpensive upgrade that has really benefitted members.

“When you’re looking at the price of a fire truck, I think that’s pretty reasonable,” he said. “It’s certainly within the ball park figure of any fire department.”

“The firefighters love it and I think it’s something you’ll see on more and more fire trucks moving forward,” Schreiner says.

Some other safety features on Comox trucks include increased lighting around the truck, hydraulic ladder storage, lowered hose beds, external ladders in place of steps, and of course external misting systems for detox.

One important safety change Schreiner made to the trucks he buys is colour.

While the traditional truck is predominantly red, Schreiner has opted for black and white trucks. He says that this increases visibility, as red lights are more visible on a black background than a red background.

“We’re silly to put a red flashing light on a red background,” he said. “When I have to justify a truck purchase to a political body like a council, I can justify it with the safety aspect rather than just the fact that we want to look cool.”

Most manufacturers and distributors across Canada said that firefighter safety features are some of the most popular additions. Fort Garry’s Petrie and Carrier Centres’ Finnie both have seen a major push for safety.

“[Firefighter safety] is not a trend, it’s a fact,” Petrie says.

“There’s a big focus on firefighter safety at this point,” Finnie says.

At the end of the day, departments are buying apparatus based on their specific needs. Whether city council buys-in to safety, climate, or even geographical considerations, both the department and its trucks will continue to change to serve the community.

Every department varies, and so does its fleet.

“We have a saying that all fire trucks are snowflakes,” Stephens says. “Meaning that they’re all custom and they’re typically manufactured to the exact needs of individual fire departments.”