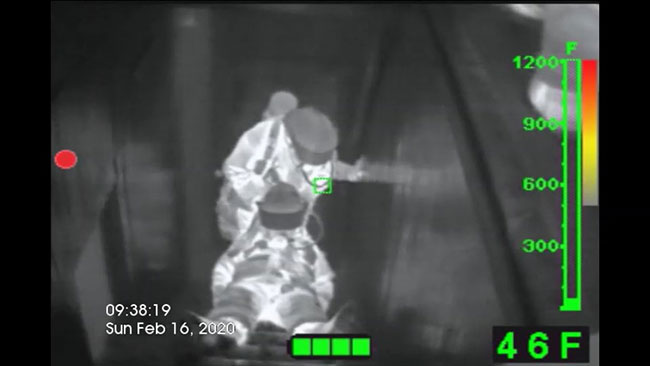 A firefighter being extracted down a stairwell. photo credit: Bullard

In its simplest role on the fireground, the thermal imager (TI) is about improving efficiency. Increased efficiency and safety of the individual firefighter and the company as a whole is always a priority. Completing specific functional tasks as part of the overall plan to save lives and mitigate property damage is what fire fighting is all about.

Many of us know that thermal imagers, in the hands of trained operators, enable firefighters to:

Having another TI on the apparatus and in the hands of a single crew is quickly becoming the norm in the fire service. I have seen several departments that provide a TI for the company officer and a second imager in the back of the cab for the crew members. This is becoming increasingly common with truck companies that use a “split crew” deployment of their manpower. Each part of the crew, whether they have VES (vent, enter, search), roof, outside vent or other duties, has the additional capability the thermal imager brings with it in the hands of a trained operator.

During a recent Rapid Intervention Team (RIT) training exercise with a fire department, their assignment was to locate and disentangle a firefighter from a large pile of debris, provide immediate life support functions, and get the member to the exterior of the building. This evolution was conducted under live fire conditions and at near zero visibility. For the purposes of providing a solid debriefing tool, the department used the Digital Video Recorder (DVR) within their TI in order to video the session.

There were challenges with disentanglement in zero-visibility conditions. One thing became clear to everyone present during the debrief: if one member of the RIT team was equipped with a TI  and had been assigned to monitor the situation and provide instruction to the team, the task could have been done in a considerably shorter time. Since a RIT team can advance only as fast as its slowest member, this compels the deployment of multiple thermal imagers for the team.

Unfortunately, having a TI on the truck is one thing, while having a firefighter actually grab it before entering a burning structure is, too often, quite another thing. It’s still too common for firefighters, in the heat of the moment, to forget to grab TIs while rushing off the apparatus. As a community, we need to continuously reinforce to firefighters and their supervisors that TIs are critical components of the tool kit. Increased team efficiency and accountability are key benefits, but so is the advantage of having more eyes on the fire. The TI’s ability to portray fire progression, display the cooling effects of water or foam, and signal extreme heat buildup enables firefighters to react in the moment to limit property loss, conserve water or foam supplies, and potentially evacuate before conditions become unsafe.

All of this thinking should not be limited to well-staffed career departments. Departments, whether career, volunteer, combination, or industrial can all benefit from having additional thermal imagers on their apparatus as well as defined operating procedures for deploying them. In fact, the efficiency that the TI brings to a department can be magnified in situations where available manpower is not optimal. Thermal imager prices have decreased markedly in the last several years. The lower cost of acquisition goes hand in hand with the deployment of additional thermal imagers at the company level. When I first came on the job, there was only one air pack on the truck. Now, everyone has a dedicated SCBA. Thermal imagers are destined for the same deployment.

There is no question that thermal imagers save lives. With the cost of TIs dropping, fire departments can now more easily afford these valuable life-saving tools and embrace the use of multiple imagers within their organizations. The time is now to make this happen.


Related
TIs and search and rescue