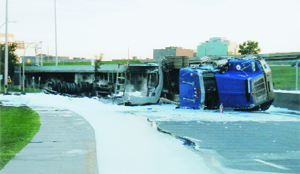 When crews from Station 49 of the Montreal Fire Service arrived on the scene of a rollover accident, it was really “shock and awe” on a large scale. A tanker truck loaded with 45,000 litres of diesel fuel had flipped over and was totally engulfed in flames, lighting up the early morning sky on Aug. 8, 2004.

PHOTO BY ELLIOTT ALBERT
Daylight shows the remains of the tanker truck surrounded by foam, which suppressed the diesel vapours and extinguished the blaze. The heat of the fire fused the trailer to the asphalt road surface.

The accident took place in a bend of westbound lane on the Metropolitan Service Road, adjacent to auto routes 15 and 40, in the Borough of Saint-Laurent. These major arteries had to be closed for several hours while crews battled the blaze. On the positive side, there were no exposures nearby, allowing fire crews to concentrate on the burning fuel truck. The driver managed to escape without injury.

The first-in crews conduct suppression operations on the huge blaze employing foam to suppress the fuel vapours and knock down the fire. Then the unburned diesel had to be diverted from flowing into the storm sewers. Five alarms were rung during this incident to ensure enough personnel were on scene to handle both of these labour-intensive tasks.

Once the incident was under control and the 10:10 code was given for the “all-out,” it was noted that the tanker trailer was fused to the road surface. By 6 a.m. the highways were re-opened to traffic, and within 24 hours maintenance crews had repaved the section of the service road and it, too, was re-opened.