Feb. 22, 2016, Port Severn, Ont. - I was on Facebook one day in early December and came across a post for a one-day hockey camp in Calgary with none other than Canadian Olympic athlete Hayley Wickenheiser. "Wow!" I thought to myself, "Would that ever be cool for Sydney." (My almost-at-the-time 16-year-old daughter who also plays hockey.)

It was a fleeting thought and I kept on scrolling, but the seed had been planted.

After Christmas had come and gone, it was time to figure out what to get Syd for her birthday, which is four days after Christmas. My mind went back to the hockey camp . . . and then to the fact that we have family in Okotoks, Alta., just outside of Calgary . . . and then onto the idea that the four of us could make a mini vacay out of it.

It quickly became a done deal.

Fast forward to Friday, Feb. 12. We flew to Calgary around 11 a.m. After a bit of a search for Sydney's hockey stick, which had been separated from her hockey bag, we were on our way to the hotel. We'd booked a hotel close to the Canada Olympic Park and the Markin MacPhail Centre, the rink in which Hayley and her Canadian Women's Hockey League team, The Calgary Inferno, train and play, and where Sydney would go for the hockey camp.

After getting settled in our room, we headed to Okotoks to watch the Flames game with my four nephews and inhale some pizza and wings. We weren't exactly a lively bunch because 10 p.m. in Alberta is midnight in Ontario, and we'd been up since 5 a.m. But it always makes my heart smile to see my Albertan family members.

Saturday was another whirlwind – a day of shopping at the Chinook Centre in Calgary and then dinner and a movie with my nephews. (Deadpool is hilarious, by the way.) Sunday we toured Banff and the breathtaking mountains that speak to my heart just like the waters of Georgian Bay, and more shopping, of course. I do have two teenage daughters, after all.

Monday we were off to see Hayley and Sydney was stoked, but we weren't sure if family members would be permitted to hang out for the day too. My husband and younger daughter are both amateur photographers and were armed with cameras, but I wondered if they would be allowed to take pictures. Hayley is an Olympic athlete after all, the female version of Wayne Gretzky, in the mind of many. I've never met an Olympic athlete or professional hockey player before and didn't know what to expect.

We gathered in one of the meeting rooms that overlooked the rink in this amazing facility and waited for Hayley's arrival. As the rest of my family sat on a lower balcony to watch Hayley's Inferno teammates practise, I was on the upper level and heard whispers of "She's here!" I turned to my right to see if I could see her and there she was, standing right beside me.

"Oh my gosh, you came from Ontario. You didn't drive, did you?"

I laughed and told her that we'd flown in and were there for only a few days. We chatted about the plans for the day and what the girls might want to focus on while on the ice.

I caught Syd's attention, motioned for her to come over and introduced her to Hayley. They chatted for a few minutes and then things got underway.

Turned out that family was not only invited to stay for the day, we were also allowed on the bench when the girls were on the ice, were allowed to take as many pics as we wanted, and were offered to help ourselves to the amazing lunch that was prepared for the girls. We even got to see – and hold – Hayley's vast collection of medals, Olympic and otherwise.

Hayley's teammate, Brianne Jenner, and two of the backup goalies for the Inferno were on the ice helping out too. The girls were split up into two groups and were lucky enough to spend time with both Hayley and Brianne, learning tricks, techniques and new skills from these two amazing women.

The afternoon consisted of a presentation by Dr. Syl Corbett on nutrition (which in no way included Ice Caps, Sydney Mabee!), a tour of the Team Canada dressing room and the facilities, several draws throughout the day (Syd won an autographed pair of hockey gloves), and free passes to the Sports Hall of Fame. The girls were also all given an autographed Team Canada Wickenheiser 22 jersey and hockey stick, among other swag.

It was a once in a lifetime experience not only for my daughter, but for my family as well. I wondered if all Olympic athletes and professional athletes were as genuine and down to earth as Hayley.

We need to cultivate more Hayley Wickenheisers in the fire service, similar to the women (and men) of the Fire Service Women of Ontario – and other associations that I know are out there. I encourage those who are passionate about what they do, and are happy to share with others the knowledge, skills and experience that helped them achieve their goals, to step up to the plate, or out onto the ice, as the case may be.

Use your passion to inspire, motivate and connect with the rookies, the less experienced firefighters, and even the senior firefighters who might just be looking for a mentor of their own. Hint, hint, nudge, nudge, wink, wink. 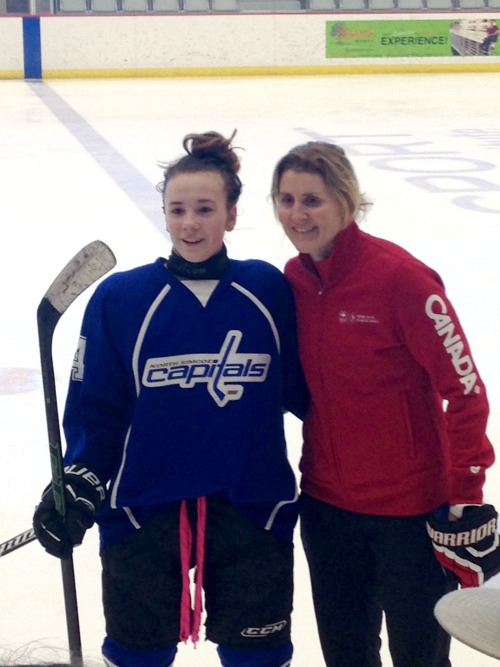