Navigating the world of protocol is complex and, at times, frustrating and confusing. Since my article Protocol and proper dress appeared in the June 2013 issue of Fire Fighting in Canada, I have received countless emails, letters and phone calls from fire personnel across Canada. Most of the questions are similar in nature; some ask for clarification on uniform standards, some seek advice on proper protocol for parades and functions, and some ask for specific insight on the wearing of orders, decorations and medals.

In responding to these correspondences, a few common questions and situations arose. I hope here to further the understanding of dress and deportment in the Canadian fire service.

Shields
The side on which shields or badges are worn on the tunic chest is the subject of some debate. In order to provide some insight we must first consider why the shield was originally issued. Historically, the chest badge was modeled after chivalrous societies to symbolize a knight’s shield. The reasoning is that those in public service perform noble work, often in a paramilitary environment. As a carry over of those duties, the Maltese cross shield was adopted by fire departments throughout the world.

A typical medieval knight or soldier carried his shield on his left arm over his heart for protection and kept his right hand free to draw his sword. That is why you salute with your right hand – to show the person on the receiving end that you are unarmed. Therefore, wearing your shield on the left side is a throwback to the early evolution of the fire service. The wearing of a shield or badge in such manner is steeped in tradition, however, there are no official regulations in Canada that stipulate on which side they are to be worn; in fact, the issuing agency may stipulate where the shield goes. The classical approach is to wear shields on the left.

Service markers
Although you won’t find service markers mentioned in the official Canadian Honour System, these awards are issued to service members who perform a set period of service and are often worn on the uniform. Again, there is no official standard regarding placement, however most emergency services personnel wear the markers at the bottom of the left sleeve (with the exception of the RCMP – members wear them on the left arm between the shoulder and the elbow). A service marker customarily represents five years of service. Styles differ among the traditional Maltese cross, maple leafs, and stars or bars. A member who has served in more than one fire department is permitted to wear the accumulative years of service.

Hazardous skill badges/wings
This topic was covered briefly in the original article, but I have received many questions about the proper procedure for mounting hazardous-skill badges on formal dress uniforms. When discussing hazardous-skill badges – or wings, as they are often informally referred to – it is important to identify exactly what is being discussed. For the purpose of uniforms, we are referencing Canadian Armed Forces patches that contain a specific specialized trade encased on either side by a wing. Single-wing badges are not referenced and are generally not worn on formal uniforms. Examples of the most commonly seen hazardous-skill badges include basic military parachutist, search-and-rescue technician, pilot, and explosive-ordinance disposal technician. These wings are worn on the left side above the lapel pocket and above any medals or ribbons being worn. Trade badges, such as military firefighter, are worn on military dress on the right side and are seldom worn on civilian firefighting uniforms, although such action would not be entirely inappropriate. A firefighter’s decision to wear trade badges is based on permission from his or her fire chief.

Firefighter trade patches
Firefighter trade patches are an emerging trend in the Canadian fire service as a way to recognize specialized skill sets. These specific patches are generally worn on the bottom left sleeve. Officers have rank braids and generally do not wear these patches. Originally trade patches included an R wrapped in laurel leaves to signify that the wearer was no longer an active member of the fire service but retained the privilege of wearing the department uniform. Now patches are used to signify medical qualifications, hazardous-materials training, and even crossed axes, which, depending on departments, can signify a fully trained firefighter. These patches are likely to increase in popularity as demands for specialized knowledge increase. Local fire chiefs must exercise caution to prevent these patches from becoming excessive, numerous and inappropriate. (For example, a rifle marksmanship patch isn’t something you should see on a firefighter’s tunic.)

Undress ribbons
As described by the Guide for the Wearing of Orders, Decorations and Medals: “Ribbons worn by uniformed personnel when the wearing of full-size or miniature insignia is not appropriate. Every honour has its own ribbon, and when more than one ribbon is worn, they must be placed in the established Order of Precedence and be arranged in rows, with the most senior ribbon at the left of the top row.”

When a firefighter is wearing short sleeves or a tunic, undress ribbons are worn centred immediately above the left breast pocket. Undress ribbons are not to be pinned to the flap of the pocket, but rather should rest on the crease that separates the top pocket flap from the tunic.

Provincial and territorial medals
These awards are authorized by the province/territory, often handed out by the provincial lieutenant-governor, and are worn at the end of all federally issued medals. The simple rule to remember is that the lieutenant-governor represents the Queen, and an official award from the Queen’s representative carries the weight of the Crown. As such, provincial/territorial medals are worn in conjunction with all medals of the Canadian Honour System. Examples of these types of medals include the Ontario Medal for Firefighter Bravery, the Saskatchewan Volunteer Medal and the Emergency Services Medal.

Foreign commonwealth medals
Generally, foreign awards from a commonwealth country that are headed by the Queen – such as Great Britain, Australia and New Zealand – may apply for permission from the Governor General to wear decorations in accordance with the Canadian Hzonours System. This is a strict protocol as the Canadian Honour System has two sets of “order of precedence”; one dating back before 1972, and the current system. Decorations not approved by the Government of Canada directives for wear should not be worn unless authorization has come from the Crown.

Foreign medals
Foreign medals are awards made by other countries that do not have the Queen as the head of their honour system, such as the United States. As a rule, these awards are not to be worn in conjunction with any order, decoration or medal unless authorized by the Governor General. Examples include bravery or meritorious service medals such as the Bronze Star or the Army Commendation Medal.

Cadet medals
I received a lot of questions about cadet medals, particularly from aspiring firefighters. Since September 2011, cadet medals have been worn on the right side above the tunic pocket. Cadet medals are classified as unofficial, so their display is at the discretion of the fire chief or the chief training officer of the academy. Cadet medals are customarily not worn. The exception is cadet pilot and basic parachutist wings, which are awarded to cadets because they follow rigid Department of National Defense selection and graduation requirements.

Association medals
Association medals are a hotly contested issue. According to the Governor General, unauthorized medals cannot be worn in conjunction with official Canadian Honours. Wearing association medals is an erroneous habit in the fire service. Many firefighters receive awards from partner agencies, such as the Royal Canadian Legion, the Order of St. Lazarus, firefighter associations, and the Royal Lifesaving Society. These medals are acknowledgements from community partners to show that they value the service firefighters provide, however, they must not be confused with official honours. Wear only on the right side, if at all.

Department medals
Department medals, such as for service or valour, are becoming more common in the fire service. Such awards are sometimes posthumous or made in memory of a deceased firefighter. Department medals not only express gratitude for the recipient but also convey a legacy of the person whose name is attached to that award. These medals are often governed for wear by the local fire chief and should be worn on the right side of the tunic only.

Commemorative and unofficial medals
Medals that are acquired through unofficial means should never be worn on any uniform, even if they seem legitimate. Firefighters purchasing medals, often labeled as commemorative, is a disturbing and growing trend in the fire service. These medals are often of high quality and craftsmanship to replicate those awarded by the Governor General, however, they are not legitimate and wearing them can cause friction with veterans and possibly lead to charges under the criminal code.

Improper wearing of honours
The topic of improper wearing of honours became front-page news across the country last Remembrance Day. Veteran groups quickly discredited Franck Gervais, who falsely portrayed himself as a combat veteran. Does this happen in the fire service? It does – and it is illegal. Lt.-Col. Debbie Miller, for example, not only wore military medals to which she was not entitled, but the ones she was awarded were stripped due to her conduct. An alleged veteran in Hamilton, Ont., is also under federal review and is charged for wearing medals he did not earn. Simply put, wearing orders, medals or badges that are not earned is not worth it. Veterans, scholars, researchers, and military buffs will quickly uncover imposters and highlight any falsehoods. The resulting negative press will devastate that person’s reputation and previous legitimate accomplishments, and demean the prestige of the fire service.

If a colleague is in violation of honours etiquette, politely advise that person that his or her behaviour has serious consequences and ask that he or she stop. If that fails, the next step is to formally bring the colleague’s actions to the attention of the senior officer and appropriate management. Failing all else, the local police service should be notified to assist, and, if deemed necessary, investigate. Those who parade around with such items on their chests should not be allowed to jeopardize the high community standing of a fire service and bring the character of fellow firefighters into disrepute. In the end, it is about trust. Communities trust their emergency services members to be honest, have integrity and be honourable.

The dress uniform continues to be a recognizable symbol of the fire service and a source of pride. Ensuring its standard enhances public trust, presents an appearance of professionalism and, finally, promotes the value of emergency services throughout the country. The benefits of continual uniformity cannot be understated.

Kirk Hughes is the fire chief for the Edzo Fire Department in the Northwest Territories. Reach him on matters of uniform standards at khughes@firehousemail.com 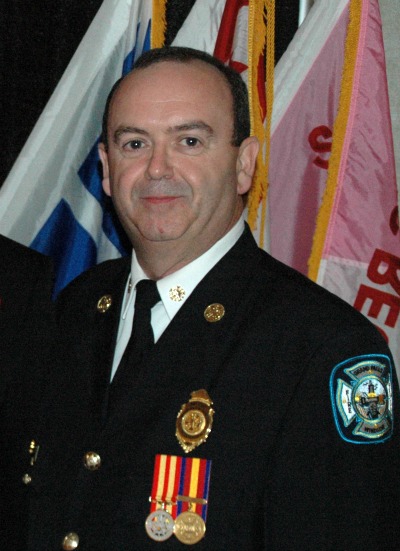