Acting Capt. Amanda Smyth sits in the front passenger seat, listening to the dispatcher confirm an alarm activation. Quickly and authoritatively, Smyth responds, ticking off boxes in her head. 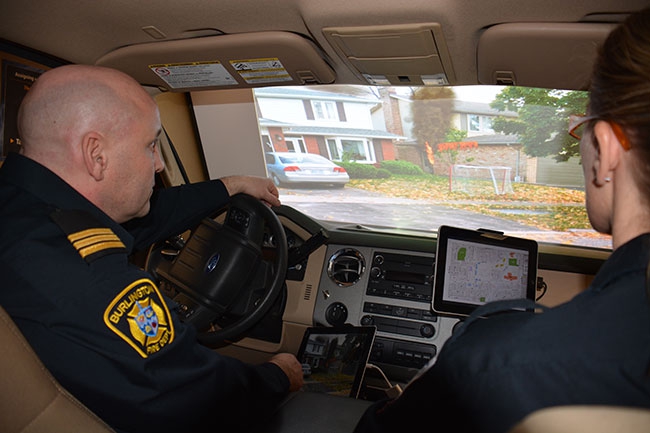 “Go ahead with the information,” Smyth says to dispatch, then acknowledges receipt of the address and map page as the driver pulls over. Smyth locates the address in the map book, confirms the location with the driver, updates the crew, indicates the level of PPE required, and ensures everyone is belted in before proceeding to the address.

The call – which turns out to be a residential gas-line break – is an exercise using a command simulator developed by the Burlington Fire Department in Ontario to help officers hone communication skills.

“I believe in training as you work,” said acting platoon chief Mark Eales, standing beside a full-sized Ford F350 cab in a room on the second floor of Burlington’s newly renovated fire headquarters.

The cab is equipped with an iPad on which the driver/trainer runs incident-command scenarios, some developed using photographs and video of  local buildings. The goal is to ensure all Burlington officers are familiar with the five classes of buildings in their districts and can run the scenarios with confidence and authority.

In other words, said Eales, “so it becomes rote.”

At a demonstration in late January, training supervisor David Meehan acted as the dispatcher, reading from a prepared script as Smyth responded. Once a training schedule is set, dispatchers will participate in the scenarios which, Meehan said, will help everyone feel more comfortable and improve communication.

The simulator has three purposes: for individual use to help officers practice decision-making and getting their tongues around the radio-speak; for large groups of up to eight officers to run incident-command scenarios; and for promotional preparation and testing.

An audio-video system projects scenarios onto the vehicle’s windshield, which is actually a large screen. The trainer/driver controls the images through the in-cab iPad – showing the Alpha, Bravo, Charlie and Delta sides of the building, for example, as the dispatcher and captain work through the necessary protocols.

“What we’re looking for as we put our firefighters through these scenarios is that they can appropriately meet the benchmarks that we follow on almost every single call,” Meehan said.

“So the first thing we’re looking for is the appropriate and correct action for receiving the call en route,” Meehan said. “That includes having the driver pull over so that the officer can receive the information in a timely fashion and a safe fashion without causing extra delay –  for example, you want the driver to pull over and stop as the officer writes down the address, because the call could be behind you, or you could blow by an intersection that you need.”

The next step for the officer is to properly brief and give directions to the crew; in the scenario, crew members were required to exit the vehicle and don bunker gear. The officer must locate the address in the mapping system, give instructions to the driver, and once the vehicle has started moving, report en route, reading back the information so the dispatcher can confirm that there were no errors or omissions. In the scenario, crew members notice smoke en route.

“What was an alarm activation is a fire,” Meehan said. “We’re making sure the officer takes appropriate action – to upgrade to full alarm.”

Once on scene, the officer does a verbal size-up or SHOP – size, height, occupancy, and problem – followed by initial actions and direction to the crew, and gives the name and location of command.

“Once that’s complete,” Meehan said, “the officer will conduct a 360 of the structure. After that, the officer works the incident, with timely and appropriate assignments of incoming vehicles while addressing tactical priorities of life safety, fire control and property conservation.”

Firefighters in the first training session, in November, were hesitant. “But we ran scenario after scenario, and by the end of the week it was just flowing,” said Eales, the acting platoon chief.

Up to eight officers can be in the training room at individual work stations that mimic fire-ground positioning, acting as sector officers operating under ICS – essentially a table-top exercise done electronically.

All movement and conversation is recorded, so participants can review their responses and note areas for improvement. For promotional tests, evaluators in an ante-room can hear and see the scenario on screens.

“Officers have the ability to take home the scenarios and review their performance,” Meehan said. “They can show their staff or run through it in their heads and recognize ‘OK, I was thinking that but I didn’t actually say it.’ If you don’t say it out loud you don’t get it out over the radio.”

For Smyth, a new acting captain, the simulator provides opportunities for realistic training.“For young officers, we just don’t get exposure to many fires,” Smyth said.

Meehan said ideally all platoon chiefs and captains will bring crews into the simulator once a month and go through scenarios.

“Our goal is that the platoon chief will bring fire officers in and run through simulations, but we also want the officers to bring their crews in so we can teach the crews the different things to look for; we want them to be aware of time of day and  month –  so as an example, in the preamble to the alarm activation simulation, it is mid-September on a Thursday at 2 o’clock, so that tells us that kids are in school and it’s possible there’s no one home.”

Burlington Chief Tony Bavota, who in February moved to Toronto Fire Services as a deputy chief – saw a similar prop in Wayne Township, Ind., a couple of years ago and planted the seed with officers.

“They made it come to life from a concept,” Bavota said, noting that the prop allows officers to practice communicating new standard operating guidelines on transitional attack and vent, enter, search.

The simulator was installed (via crane) while part of the station roof was removed during renovations in late 2016. The F350 was supplied by Ford. The cost – a $30,000 projection system (including the specialized, in-cab lens) , $7,000 for radios and $13,000 for furnishings – were partially covered by a federal grant for training.

In Burlington, a department of 170 full-time suppression firefighters and 60 volunteers at eight stations, all officers must be capable of operating one level up: captains as platoon chiefs, platoon chiefs as district chiefs. Practising scenarios, listening to commands, and repeating turns of phrase so they become second nature helps to instill confidence.

“It’s another tool in the mentoring process,” Smyth said.

Nuances, Eales, said, are learned and committed to memory in the simulation room. Simple things, like remembering to do a seat-belt check after pulling over en route to a call to – something easily forgotten in the heat of the moment – is critical and can be learned with practice.