I missed Brampton firefighter Britney Holmberg and her teammates win the female relay in the Scott Firefighter Combat Challenge on Friday.

I missed seeing Ryan Pennington – some of you know him as @jumpseatviews – who writes for our magazines about hoarding and, for the first time, taught at FDIC.

Two and a half days, a spreadsheet full of meetings with vendors and writers from across Canada, the gigantic trade show, a morning in the Guardian Safety & Survival Training Simulator (more on that below) and the usual after-hours networking that is part of the FDIC experience.

And that’s the tip of the proverbial iceberg.

I saw a bit of the National Fallen Firefighter Foundation/9-11 stair climb on Friday between meetings with truck manufacturers at the mammoth Lucas Oil stadium. (Pierce’s 107-foot aerial on a single rear axel is impressive, even to non-truckies like me.)

I talked with a lot of people about technology – wi-fi and backup cameras and command/control systems that do everything but drive the trucks.

I saw Alan Brunacini walking down the street by himself – twice.

I had dinner at a table beside Billy Goldfeder.

I ran into Vaughan Fire Service chief mechanic and writer Chris Dennis and Thames Centre Chief Randy Kalan – and dozens of other Canadians.

I met with Calgary firefighter Randy Schmitz – who has written for our Canadian Firefighter magazine the entire time that I’ve been editor.

I watched groups of firefighters testing tools and PPE and wishing they had a municipal chequebook in hand.
{gallery}20881{/gallery}
My plan last week was to talk to truck makers to find stories for our annual apparatus issue in November. Interviews were set up in advance and public relations people came armed with key drives full of high-res photos and PDFs full of specs.

My secondary mission was to experience the Personal Protection Equipment Specialists /Guardian collapsed-structure simulator (www.ppesguardian.com). Given the Elliot Lake mall collapse in 2012 and the tornado in Essa, Ont., in 2014, I thought it would be a good idea to learn more about search and rescue in collapsed structures.

My first clue that the simulator might turn out to be more than I expected came when the PR guy said he was looking forward to hearing about my experience in the “box of pain.” Probably not the best advertising tagline, I thought.

So, I packed my custom-fitted Globe gear (sorry, shameless plug!) and hoofed it four long Indianapolis blocks from my hotel to South Street where the simulator was set up outside Lucas Oil, near the Scott Combat Challenge – prime real estate indeed!

It turns out that Guardian owner Kerry Oswald – a small woman with a great big personality – developed the idea for the simulator after a week spent washing coveralls for urban search and rescue teams after 9-11.

“They told us that those coming to help just didn’t have the training,” Oswald said.

Oswald works with trainers from the Baltimore City Fire Department, who (very patiently) escorted me through the simulator – the unit I was in costs about US $400,000. I asked for light just once when I could feel a tight space through which I was supposed to shimmy, sideways, using my hands to pull me forward, but was nervous about getting stuck – and humiliating myself! With a bit of coaxing, it was a piece of cake.

I made it over the floating floor, through the entanglements, across the catwalk, tossed debris aside (mild exaggeration – I grunted and pushed with all my weight), crawled up blocked stairs and through narrow passageways, slid through a crevice, jumped at the sound effects – cries for help, creaks and groans – and remembered to sound the floor in front of me at all times, right hand on the wall, left hand outstretched to feel, in the pitch black. I banged my (securely helmeted) head about 100 times, my knees may never recover, and I sweated off every calorie consumed over four days in Indy – including the world-famous shrimp and hotter-than-hot, clear-your-sinuses-and-make-your-eyes-water cocktail sauce at Harry & Izzys Steakhouse.

I spent the week before Indy in Dryden, Ont., at the Northwest Response Forum, learning about the bureaucratic side of emergency management and response from those who had responded to collapses, tornados and floods. I wanted more hands-on experience.

Jennifer Evans, Britney Holmberg and Ryan Pennington achieved lofty goals in Indy. My goal was journalistic – to be better able to write and edit stories about emergency response so that I can use what I learned and saw and touched to help Canadian firefighters better themselves and, hopefully, help to make their jobs easier and safer.

After completing the simulator exercise and taking photos, I hid my soaking wet hair under a ball cap, and started to walk back to the hotel carrying my jacket, pants, boots, helmet, camera and my everything-else-I-might-need-in-Indy bag that included a tape recorder, notebook, wallet, maps, Blackberry, iPhone . . . you get the gist.

I made it half a block and grabbed a cab. The trade show had just opened and I had miles to go that afternoon. Literally. 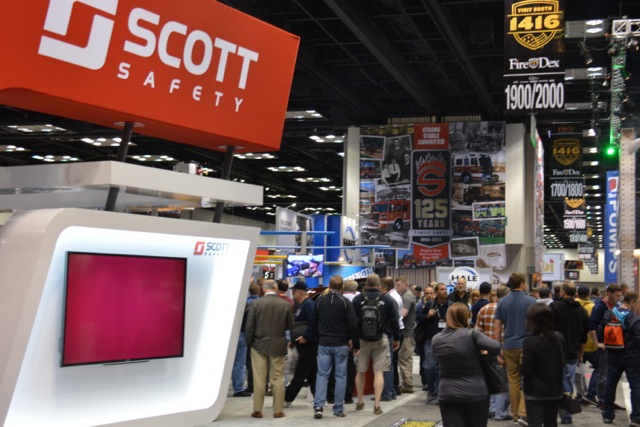