May 9, 2016, Grande Prairie, Alta. – It was remarkably fitting that as we approached the fire hall in Sexsmith, Alta., Saturday afternoon, our last stop before our departure point in Grande Prairie after three days at Northern HEAT in Peace River, the Answer the Call recruitment logo appeared, prominently placed on the east side of the building.

Because that's what's happening here in Wild Rose Country: firefighters, mostly volunteers, are being dispatched to Fort McMurray and other burning areas of the province, answering the call to help fight a seemingly unstoppable blaze.

Our driver, Sexsmith Capt. Chris Welsh, had the Answer the Call logo – the province-wide campaign that goes national in September through the CAFC – made into an outdoor sign for a recruitment drive a year ago and opted to keep it up, despite a waiting list to get on the department, a reminder of the role volunteers play in the community of just 2,400.

The three-bay hall, a decades old white, wooden building that's being replaced next year at a site a couple of blocks away, sits on a corner by a blacksmith museum, dwarfed by the town's grain elevator out back.

To say that Welsh, who drove fellow Northern HEAT speaker Peter Van Dorpe, the chief in Algonquin-Lake in the Hills, Illinois, and me to and from Peace River, are proud of their department is an understatement: all 20-plus volunteers – average age around 25 – are NFPA 1001 certified.

Sexsmith is part of the County of Grande Prairie; firefighters from these parts and elsewhere in the province have shuttled back and forth to Fort Mac over the last several days; others were dispatched to High Level, where Fire Chief Rodney Schmidt needed reinforcements to battle a massive lumber-mill fire, the burning wood piles 80 feet high, 60 feet wide and a mile long and threatening to spread (the massive Norbord building saved by firefighters.)

Schmidt, the president of the Peace Regional Fire Chiefs Association, arrived back at Northern HEAT Saturday afternoon, having been called home on Wednesday in the middle of flashover training, the mill fire still burning but in good hands under incident commander Trevor Grant, High Level's former deputy, now a deputy with the County of Grande Prairie.

At that point Saturday, 70 firefighters from 12 departments – Grande Prairie city and county, Grande Cache, Slave Lake and others – worked the mill blaze, all brought in under the Northwest Alberta emergency resourcing agreement drawn up by area chiefs and, so far, including 27 municipalities.

The agreement was born of a wildfire that threatened High Level last year, to simplify the process of requesting resources from other departments while ensuring that all municipalities remain properly staffed, costs are properly (and fairly) allocated and personnel are properly rotated.

Even after the Slave Lake fire in 2011, the province has yet to develop a municipal resourcing inventory, Schmitdt explained, although the Calgary Emergency Management Agency recently set up a portal for that purpose. Peace region chiefs, however, have established their own system along with the resourcing agreement, relying on each for support, equipment and manpower, keenly aware of the need to access additional trucks and personnel during emergencies and having the necessary legalities in place to do so quickly and efficiently.

The run to High Level – not far from the Northwest Territories border – from Peace River is 300 kilometres. Grande Prairie is 200 kilometres south, Slave Lake 240 kilometres. Fort McMurray is almost 700 kilometres away.

The more than 100 firefighters here, from the likes of Loon River, High Prairie, Fort Vermillion, Fairview, Nampa, Wembley, Whitecourt, Peerless Trout First Nation, St. Isador Three Creeks, High Level, La Crete and Grande Prairie, think no more of hopping in their pickups – or driving aerial trucks hundreds of kilometres – to help a fellow department than they do of going to practice on Tuesday nights or spending vacation time training at Northern HEAT.

They have answered the call.


View a Facebook gallery of photos from Northern HEAT. 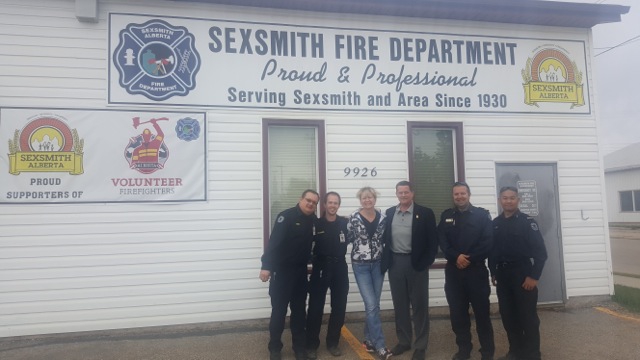