June 24, 2016, Toronto – I was taken aback yesterday when a builder at the back of the room at the OAFC Home Fire Sprinkler Summit said the information being presented was all new to him – that he'd never heard of NFPA 13D, the standard for sprinklering residential buildings.

Residential sprinklers are, of course, optional, so I guess there's some logic to the fact that the gentleman had no clue – to put it bluntly: he had no need to know. Or so I thought.

Turns out the gentleman is the CEO of the Ontario Home Builders' Association, so given what I perceived (until yesterday) to have been fairly widespread and consistent fire-service messaging about sprinklers saving lives, it's clear that's not the case.

The point of the summit – the first in Canada – was simple: to start a conversation with the people who plan, design and build homes, and, ultimately, to improve life safety.

Analogies abounded – seat belts, hockey helmets, and, in particular, air bags, demanded by consumers to keep them safe, and, therefore, embraced by the vehicle industry: safety does sell. The challenge: how to translate that desire for safety on highways to safety at home?

Cost, or perceived cost, is a sticking point: NFPA sprinkler guru and myth buster Matt Klaus cited a mere $1.35 a square foot for residential sprinklers but ceded that's in U.S. dollars ($1.72 Canadian), and for multi-unit installations rather than single dwellings or retrofitting. Still, it's affordable – even the builders agreed with that.

More myth busting: NFPA 13D is a life-safety standard, not a property-loss standard; and residential sprinklers are different from commercial units – specifically designed to hit walls and drip down onto the myriad combustibles pushed against the four sides of any given room in a typical home, and douse a fire. Sprinklers put out fires, use far less water than a fire hose, and do much less damage.

With 100 fire deaths annually in Ontario – a recent inquest examined seven fire fatalities and recommended consultation on sprinklers – what's the hook for the builders?

Trade off. In Huntsville, for example, Fire Chief Steve Hernen – the OAFC president – said builders are buying-in, partly because they're getting something in return: higher density housing, waiving of local development charges, more appealing sub-division designs.

The key, according to Don Jolley, the fire chief in Pitt Meadows, B.C., is to normalize sprinklers as a critical part of a broader fire-protection system. A Pitt Meadows bylaw passed in 2005 requires sprinklers in most new residential construction – at an average cost, Jolley said, of $1.07 a square foot. Since then, no fire in a residential or commercial building with sprinklers in Pitt Meadows has burned beyond the object of origin; more importantly, there have been no fire deaths in any of those buildings.

No one yesterday advocated sprinklers as a replacement for efficient fire-department response. But for developers who hadn't previously seen videos of side-by-side burns or understood 15-minute rural response times, a collective light bulb seemingly came on.

There's no need, builders were told, for sprinklers in attics or garages – most fatalities happen in kitchens, family rooms and bedrooms.

But to save more lives given factors such as response times and lightweight construction, sprinklers are a necessity.

"The best builders in the world are not going to stop a smoking fire, or a fire caused by a candle or an arcing wire," Klaus said.

"I don't care how good you build the home, all I need are oxygen and an ignition source and I have a fire."

Smoke alarms work – but children, teenagers, and intoxicated adults sleep through them (builders learned this through videos yesterday), and people take out the batteries. Sprinklers, said Cynthia Ross Tustin, the fire chief in Essa Township and summit chair, are simply plumbing – nothing for builders to fear.

So, then, how to sell safety, and sprinklers, and how to get consumers to buy-in?

Ask media strategist Jay Acunzo. Facts and stats are fine, Acunzo said in a presentation about effective messaging, but neither resonates emotionally with homeowners.

That's a leap for fire-service personnel used to neat stats and facts. But it's clearly necessary, given the wide-eyed builders in the room yesterday.

Not to give away Acunzo's shtick, but if you haven't seen it (and need a distraction on a Friday!), Google "Dumb Ways to Die" and watch the YouTube video (or click here). The award-winning Australian public-service announcement for Metro Trains Melbourne is brilliant, different, memorable, and unexpected (apologies – you'll be humming the tune all day!).

As Chief Jolley said after the summit wrapped up Thursday afternoon, it'll take time for a para-military organization that generally suppresses creativity to embrace new ideas.

Maybe so, but a preventable house fire is, indeed, a dumb way to die. 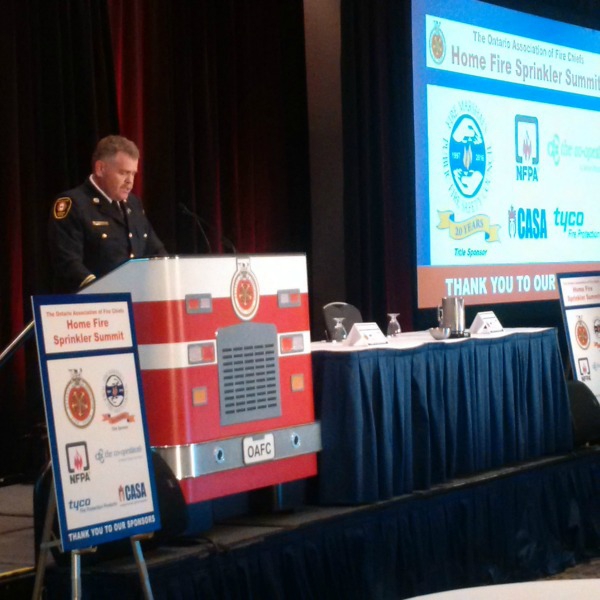