April 16, 2015, Dryden, Ont. – We call him Ken Dryden, the fire chief in this northern-Ontario town where the Domtar mill looms on the horizon and the Northwest Response Forum wrapped up Thursday afternoon.

Ken “Dryden” Kurz is like so many other full-time chiefs of volunteer fire departments: always on call, able to spit out statistics and details about every corner of his community, committed to keeping his people safe.

He’s also a life-long resident who still shakes his head about the fact that his Austrian ancestors came this far north from Kentucky because the land was free.

Dryden is a snapshot of small-town Canada: 8,000 people but a hub for surrounding communities, so much so that the Walmart expanded – twice.

I asked Chief Kurz this morning to show me the risks in his town.
{gallery}20806{/gallery}
Domtar, which has two full-time firefighters with whom the Dryden Fire Department work closely.

The Ministry of Natural Resources forest fire fighting base where about 400 people work at this time of year, in a complex near the airport; big buildings, no sprinklers.

The airport – 10 or so minutes from Dryden’s main fire hall and no internal fire brigade. (Except when the prime minister comes to town and the City of Dryden Fire Service is required to stand by.)

Monster homes on Wabigoon Lake – no hydrants, a two-metre drop to the lake from which firefighters draft water; the fire department carries sleds to pull and push equipment up and down, to and from the lake.

A Superior Propane facility, smack across the street from a handful of homes. Vulnerable occupancies – well, not officially, but buildings that house people that are . . . vulnerable.

We drove down along the Wabigoon River that opens into the lake. The ice is almost gone but not enough so that water bombers can fill up but today’s sunshine may change that.

A year ago, Dryden’s emergency education officer (a combination emergency management an public-ed position) was cut. Council wants an Office of the Fire Marshal review of fire-protection services.

An hour in the work truck with Ken Dryden might be a better idea.

See a Storify collection of the tweets here. 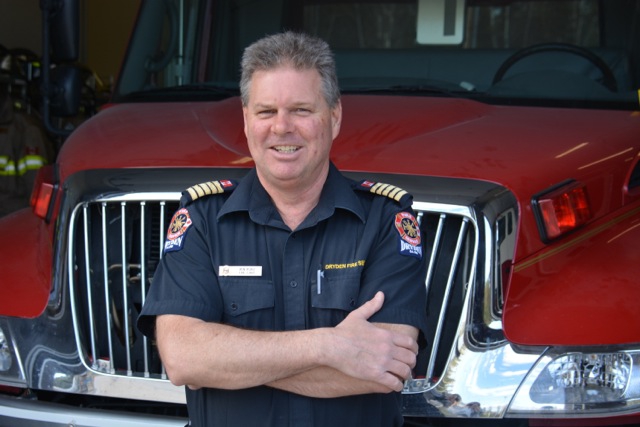