Lance Spencer, a regional account manager for Fort Garry Fire Trucks, says there has been a definite shift in the trend in trucks toward multi-purpose vehicles – apparatuses that combine pumpers, tankers and more in one unit. These all-in-one trucks alleviate the need for sizeable budgets and provide fire departments with everything they need to function efficiently.

“With shrinking budgets, people want the most they can get [out of a truck],” Spencer said. “Carrot River is a perfect example of that.”

Carrot River, Sask., is a five-hour drive north of Regina and is located in the southeastern corner of the Rural Municipality (RM) of Moose Range. The Carrot River department – which operates out of one fire hall with 16 volunteer firefighters, two volunteer medical first responders, and a fire chief, deputy chief and assistant deputy chief/fire inspector on retainer – covers a 3,108-square kilometre area that comprises 36 smaller townships and settlements, as well as Moose Range, and a combined population of about 2,150 people. The department also has six trucks – all but two of which were manufactured in the early ’90s or earlier.

Debienne, a 25-year fire-service veteran who was promoted to chief in January, was looking to replace the department’s 1982 GMC 1,200-gallon tanker. During his preliminary research, he realized that two of the department’s other front-line apparatuses – a 1982 Spartan pumper and a 1992 Fort Garry pumper – were also out of date. The cost of a new tanker would be about $200,000, while a new pumper, which the department also needed, would cost between $300,000 and $350,000 – price tags that the Town of Carrot River was not likely to approve.

“We decided to join forces [with the RM of Moose Range] and put together a tanker/pump for the town and the RM, essentially joining the RM and the town fire departments under one,” Debienne said.

The result is a truck that fits the needs of a department that responds to myriad calls – everything from forest fires to industrial blazes, multi-vehicle collisions and urban house fires. Built on a Freightliner M2-106 chassis, the truck is powered by a 350-horsepower Cummins ISL engine and an Allison 3000 EVS automatic transmission. It has a 1,500-gallon water tank for rural firefighting operations and it has a 1,250-gpm pump for in-town calls.

The truck also has a total of eight large compartments for storage and a bumper turret for fighting wildfires. With its four-man crown, the truck can bring a total of six firefighters – plus 1,500 gallons of water, a 1,250-gpm pump, various rescue tools and more – to the scene in one apparatus.

“It, in essence, replaces three units, putting two of our old units as support vehicles,” Debienne said. “Instead of spending $800,000, we [spent] a little over half that.”

Spencer understood Debienne’s situation; the tight budget, the need to do more with less.

“Most rural fire departments have the same frustration,” Spencer said. “There’s not a lot of money to spend and everything else comes first.

“Chief Debienne worked hard so that council had an easy decision to make. He had a truck in mind and did all his homework.”

Spencer said Debienne knew the department needed “big water” for industrial fires – the town is home to forestry, horticulture and machinery plants – and recognized that a Class-A foam system and a compressed-air foam system (CAFS) would be useful to his department.

“It was good timing,” Spencer said, “because our Waterous representative was up at the time [that Debienne was developing the truck].”

That St. Paul, Minn.-based Waterous rep, Gregg Geske – who is the foam and CAFS product manager at Waterous – recommended the company’s new OneStep CAFS. It didn’t take much convincing: Debienne’s new truck is the first fire apparatus in North America to feature the device.

Waterous’ OneStep takes the guess work out of CAFS operations, automatically mixing the foam solution and air so that firefighters don’t need to look at gauges or calculate proper air-to-foam solution ratios.

“It makes CAFS much easier to operate,” Spencer said. “You just need to hit a button and it’s ready to go.”

The CAFS doesn’t just sound good on paper; Debienne said the device can knock down a fire faster and with less damage than typical water-only methods.

“The CAFS can take the capabilities of water and make it somewhere between four and 10 times [more effective],” he said.

“Now, with the CAFS, this truck can put out a fire that would have taken 15,000 gallons of water with just the 1,500 gallons that are on the truck.”

With this new CAFS, Debienne says the department in Carrot River will likely spend fewer hours on scene; CAFS injects compressed air into the foam solution, causing it to bubble and cool the fire faster, Spencer says. Both CAFS and water as extinguishing agents are effective, but water takes longer and a lot more of it is needed to completely extinguish a fire.

Residents whose homes are affected by fire will incur less property damage, not only from the fire itself, which should spread less since it can be extinguished faster, but also as a result of less water run-off.

The CAFS will also make for a safer fire ground for firefighters. Since it takes less time to knock down a blaze, Geske said firefighters will spend less time in a hazardous fire- and smoke-filled environments.

“A lot of fire departments are purchasing a CAFS because of the benefits,” Geske said. “But some of the problems – it’s difficult to operate, you have to decide how far to open the valve, you have to bring up the pressure, but you have to control the pressure of the water . . . Those difficulties are what we’re addressing with this system.”

The CAF system has pre-engineered and pre-defined settings that control the water pressure and mix the foam and air to the perfect solution-to-water ratio.

“The entire system is pre-engineered so that [pump operators] don’t have to think about it,” Geske said. “It’s all about ease of operability.”

That ease of use also translates to fast, effective and safe firefighting operations, Geske said. Operators aren’t wasting valuable time on the fire ground trying to calculate the best foam ratio or the proper pump pressure – and they’re not wasting even more time troubleshooting when their calculations aren’t correct.

“It’s a more efficient use of the tools that firefighters have at their disposal,” Spencer said.

Chief officers should keep that efficiency in mind when shopping for a new truck – and the new features that come with it. Spencer said these new technologies can result in a bit of sticker shock – Waterous’ new CAFS can be $30,000 more than traditional CAFS, depending on the size of tank and type of foam – but a balance between the budget and the best tools to keep firefighters and citizens safe is key.

“Sure, (the OneStep CAFS) is more expensive up front,” Spencer said, “but the benefits and long-term value make it a wise investment.”

Spencer also said more and more fire departments are choosing to trade off on the number of trucks in the apparatus bays so that the trucks that are there can be outfitted with new, efficient technologies.

“We’re seeing more and more that fire departments are going for the multi-purpose vehicle, as opposed to two or three trucks,” he said.

Ultimately, Spencer said, chiefs understand what the department truly needs in a fire apparatus. Bringing that list of needs – and that list of wants – to the manufacturer will help truck builders to better equip firefighters with the most efficient tools for the job. 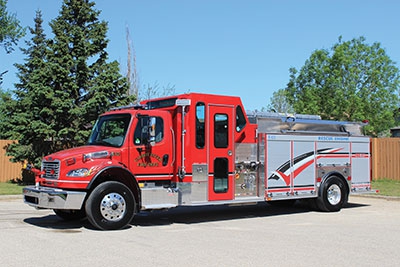