Features Training
Back to Basics: May 2016

Firefighters should be aware of situations that lead to rapid fire development (RFD) – occurrences such as flashovers, backdrafts and smoke explosions – and how to take aggressive action to protect themselves. In the March issue of Fire Fighting in Canada, we examined why better gear and new construction materials expose firefighters to RFD today more than ever before. 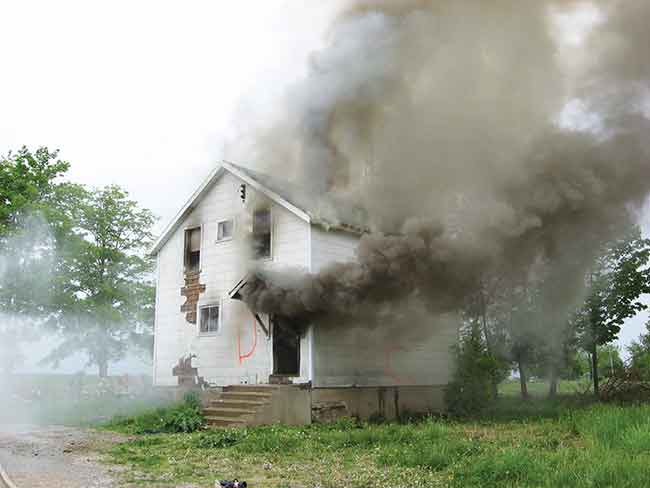 Thick In part 2 of his series on rapid-fire development

As a reminder, a flashover is the simultaneous ignition of all contents within a room. A flashover occurs when hot gases in the form of black smoke from unburned particles of combustion rise to the ceiling and spread out across the walls. As the smoke spreads, it heats up the room’s contents – paint on the walls, furnishings, clothing and flooring material. Once the contents reach their ignition temperatures – between 540 C and 820 C (1,000 F and 1,500 F) – rapid fire development occurs and everything becomes a big ball of fire.

There are visual and tactile signs or indicators that warn firefighters of impending flashover. Firefighters should heed these signs and take aggressive action to protect themselves.

Firefighters should take aggressive action against RFD, acting smartly in order to gain the upper hand. There are two ways to effectively overcome and eliminate flashover: tactical ventilation and aggressive cooling with water.

Ventilation should be coupled with aggressive cooling from the application of water. A hand line, minimum 45 millimetre (1 3/4 inch), used in an effective way, cools the ceiling, walls, floors and contents all at once.

Aggressive cooling involves using a straight or solid stream of water from the nozzle. Do not use a fog pattern when facing pre-flashover conditions. A straight or solid stream of water will effectively knock down the fire and at the same time reduce the extremely high temperatures inside. During Underwriters’ Laboratories tests conducted for a report on fire attack tactics in the summer of 2013, temperatures inside a structure were recorded to have been reduced by about 700 C (1,300 F) with an aggressive attack using a smooth-bore nozzle.

To aggressively cool a room, move the nozzle in a pattern so that the stream hits the ceiling, walls and floors in a sequential and consistent fashion. One method is to sweep across the ceiling then straight down to the floor; another is to sweep the ceiling and also sweep the floor. No matter what pattern, the attack should involve movement and not a static application of water.

Aggressive cooling reduces the temperatures of the ceilings, walls, floors and contents as firefighters advance into the structure. Apply water as well to the unburned particles of combustion. Remember, the particles contribute to the radiant heat along with the ceiling, walls, floors and contents. Applying water to the smoke sounds very aggressive and goes against everything firefighters have been taught for the last number of years, however, changing technology and better science impacts our tactics. We now know firefighters need to spray water at the smoke to effectively cool it and reduce or eliminate the risk of a flashover.

Mark van der Feyst has been in the fire service since 1999 and is a full-time firefighter in Ontario. Mark teaches in Canada, the United States and India and is a local-level suppression instructor for the Pennsylvania State Fire Academy and an instructor for the Justice Institute of BC. He is also the lead author of Residential Fire Rescue. Email Mark at Mark@FireStarTraining.com