May 17, 2016, Fort McMurray, Alta. - Officials say several homes have been damaged by an explosion in Fort McMurray.

The Regional Municipality of Wood Buffalo said in a news release that the explosion happened Monday night in a home in the Dickinsfield neighbourhood in the city's northeast.

Seven other homes were damaged in the blast. There was no immediate word on any injuries.

The region also said there was a fire in the Thickwood neighbourhood that destroyed a four-plex and damaged three other housing units.

''These areas are no longer under immediate threat,'' said the news release, adding the cause of both the explosion and fire are under investigation.

The entire population of Fort McMurray, more than 80,000 residents, are now entering their third week away from home after a wildfire spread into the oilsands city on May 3. About 2,400 structures were destroyed, but essential infrastructure, including the hospital, water treatment plant and the airport, remain intact.

In recent days, oilsands workers were moved back up north to begin ramping up oilsands production again.

But late Monday about 8,000 people working at camps north of Fort McMurray were ordered out in a mandatory evacuation due to the fast moving fire.

The evacuation zone, stretching about 50 kilometres north of Fort McMurray to just south of Fort MacKay, included Syncrude and Suncor facilities, along with several smaller operations.

''The urgency that we are looking at is with regards to the oil and gas infrastructure,'' said Scott Long of the Alberta Emergency Management Organization at a briefing Monday evening.

''Everything within Fort McMurray itself, the community, all controlled, orderly. There is no panic there.''

John Archer, a spokesman for the Alberta government, stressed the move to get people out – many were headed to Edmonton – was being done in an orderly fashion.

''By and large, I believe the fire has not encroached too much more upon Suncor or Syncrude, but the reason why the call was made (Monday night) is so they're not starting an evacuation at 2 a.m.,'' he explained.

''I don't think the threat is that much more acute now than it was earlier.''

Suncor said in news release that it had ''started a staged and orderly shutdown of our base plant operations'' and that personnel were being transported to work camps further north.

It stressed there has been no damage to Suncor infrastructure.

''Suncor has enhanced fire mitigation and protection around all of its facilities,'' said the release. ''When it is safe to do so, we will continue implementing our restart plans.''

High winds have spurred the quickly spreading wildfire as tinder-dry conditions persist in the region.

''Heavy smoke ... does make it unsafe to fly in some spots, but we are able to still work the flanks and hope to pinch it off,'' said Alberta wildfire manager Chad Morrison.

''When you have this kind of extreme fire behaviour it doesn't matter what tankers you put in front of it, it doesn't matter how many helicopters, Mother Nature is going to want to continue to move that fire forward.''

He said the forecast for Tuesday called for the winds to shift to the west – which is a good thing.

''If we are able to hold it (Monday night) away from the facilities we should have a favourable day to continue to get at it.'' 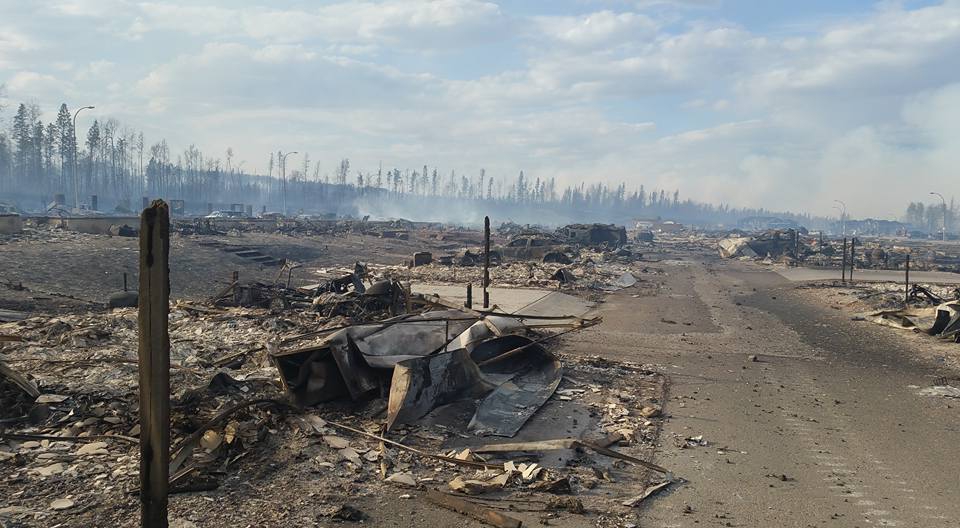 About 2
Print this page