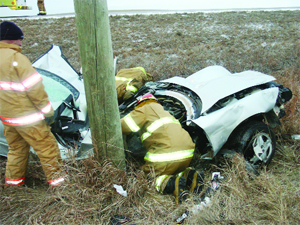 Patient was not only trapped in his vehicle after a late night crash but hours before discovery was also suffering from hypothermia. It was 24 below zero on a bleak, windy prairie.

Arriving on scene the Coaldale Fire Department came upon a car literally wrapped around a power pole with the driver trapped. He had been there for over six hours. This is the story of the successful extrication.

Around 1 a.m. on the morning of Nov. 25, 2006, a 17-year-old male driver was driving southbound on the secondary highway #845, seven miles (10 km) south of the Town of Coaldale located in southern Alberta. As was later told to first responders by the young victim, he was changing CDs in his silver 2000 Chevrolet Cavalier four-door sedan when his car drifted into the west ditch. He overcorrected, lost control and slid passenger side first into the east ditch.

The car dug in and flipped onto its passenger side, sliding into a power pole roof first, literally wrapping itself around the power pole and entrapping the youth. He stayed in that position in -24 C weather with a stiff breeze blowing for over six hours in the cold dark until a passing motorist spotted him just before 7:30 a.m.

Our Fire, Rescue and EMS crews were paged out at 0726 hours for “a motor vehicle collision with entrapment.” As I was getting dressed our dispatcher reported on the radio that a person was trapped in a pick-up truck that struck a pole at 0100 hours; the 17-year-old driver was conscious and breathing but trapped in his vehicle and extrication would be required. His primary  complaint was pain in his hips. I responded from home in my command unit directly to the scene, arriving at 0735 hours as the first on scene.

I was not quite prepared for the sight that awaited me. I did a quick size-up, walking around the scene looking for hazards. The car was leaking fluid and the crossbar on top of the power pole was split and one of the three wires of a 14,600-volt power line was hanging just a foot below the crossbar.

I immediately called for the power company to respond and was later given a 30-minute response time. I went around to the roof side of the car and found a young female, the passing motorist who had called in the MVC, talking to the trapped driver. I identified myself to them and asked the victim where he hurt. He replied that his legs hurt and he was cold and asked me if we could get him out of his car. I told him that we had never left anyone in a car yet and he wouldn't be the first.

Assessing the scene I saw that his left tibia and fibula had an angulated fracture at a 90-degree angle; his right leg was pinned under the dash and his head was face down by the passenger side C post. I could not see his face but could tell that he had vomited in that position. It appeared that he released his seat belt sometime during the night and fell into this upside down suspended position.

Pump 2, our quick attack unit with my deputy chief and a firefighter, showed up shortly behind me as did our advanced life support ambulance. After a quick group huddle we decided that we could not wait for the power company to shut power off and this young lad needed to be removed quickly if we wanted to save him. (Power was later shut off during the extrication procedure.) Our heavy rescue arrived at 0739 hours with six firefighters and our full-sized pump arrived at 0741 hrs with five firefighters. We now had more than a dozen firefighters on scene and could begin the procedures necessary for a successful extrication.

Firefighters moved to set up portable lighting as it was still fairly dark. They also stabilized the car with cribbing and the barbed wire fence was cleared away from the vehicle, giving us better access. Meanwhile, EMS personnel had difficulty assessing the patient because we could not get to him.

Our first order of business was to use our heavy hydraulic spreader to open up the back of the roof. This was completed by pushing from the top of the back seat to the roof in the rear window opening. After a couple of pushes, this gave us enough room to better access and assess the patient.

Crews then cut the C pillar on the driver’s side of car (top) and then made a relief cut by the B post and did a partial roof flap as most of the roof was crushed by the power pole. We could not see the lower portion of his right leg; it disappeared beneath the crushed dash (see photo).

The pole struck the roof directly above the driver’s and passenger doors, the driver’s door was just approximately 14 to 16 inches (35-40 cm) tall and the passenger door was about eight to 10 inches tall (20-25 cm) and you could not see anything in this area. We then decided to pop the driver’s door so we could locate the trapped right leg. This proved to be a little difficult as the door was jammed against the pole and the working platform for our spreader operator was small and six feet (two metres) off the ground.

The door was soon popped and we saw a little more of his leg but not what was entrapping it. Our next course of action was to tunnel through the floorboards of the car. The front clip had snapped off at the sub frame anchor points on the body and was at a 45- to 60-degree angle to the passenger compartment of the car. The front clip was attached at the base of the windshield only by a small amount of metal.

One of the firefighters cleared away debris and found the trapped leg. I asked if we needed to displace the steering column and he passed me the tilt steering wheel assembly that had been snapped off; the steering wheel itself was only eight inches (20 cm) tall.

We were able to remove by hand pieces of the car that were entrapping his leg and we were finally able to slide a backboard under him. I noticed our patient was very cold while we strapped him on the backboard and I assured him that the heat was cranked up in the ambulance and we had a heated blanket ready to cover him and he would think he was in Mexico as it would be that hot. He smiled at that one.

Our patient was conscious and talked to us during the entire extrication, telling how he loved his car and that he was worried about the sub-woofers he had just installed a few days earlier on his 17th birthday – Nov. 22nd.

What seemed like a long evolution actually only took 30 minutes. Our extensive training and large arsenal of extrication equipment paid off for us. I have taught a lot of extrication courses over the years and have done scenarios like this, although I was never quite able to duplicate the real thing like this one.

Our crews were never stymied. As a team we discussed our procedures in advance and always had a plan B in reserve. We had contacted STARS (Shock Trauma Air Rescue Society), our trauma helicopter out of Calgary, but we had the patient free before they could have launched, so the patient was taken by the ambulance on scene to Chinook Regional Hospital in Lethbridge (11 kilometres west of Coaldale) and later transferred to the Foothills Trauma unit in Calgary, about two hours north of Lethbridge where he is still recovering at the time of writing in early December. His injuries included fractured C2, C3, T3 and L5, a compound fracture of the left tib-fib, a fractured right femur, a fractured left wrist, a fractured jaw and frostbite to his extremities.

He does not have any paralysis from his fractured spine, but does have some issues with his left wrist. At this time doctors are not sure whether he will regain full use of it. It is my belief that the cold saved him: the hypothermia slowed down internal bleeding and the car cocooned around him and protected him from the extreme cold.