Sept. 21, 2015, Kitchener, Ont. - Earlier this year firefighter Amber Bowman wasn't sure she would be able to work, never mind compete at the Scott FireFit Championships.

Bowman, a firefighter for Central York Fire Services in Ontario, had suffered a serious concussion in May and for months was off work recovering.

"I went back to work on Aug. 4, fully cleared, and started training like crazy to see if I could just compete – not win, not break a two-minute – but just compete," Bowman said. "As I continued to push and excel and wrap my mind around being back to where I normally would be, it took the pressure off, I think."

On Saturday, the firefighter smashed the record for a woman's individual result, clocking in at 1:58:40 – previous record was 2:01 – at the Canadian Firefit nationals in Kitchener, Ont.

Bowman and her international fire combat teammate Carla Penman, an officer with the District of North Vancouver, were forces to be reckoned with at the FireFit nationals on the weekend. At FireFit the two are friendly competitors, but internationally they are world record holders for women's tandem – a record they set last November at the World Firefighter Combat Challenge in Phoenix.

Penman, who placed third in the FireFit women's individual category after Swift Current Fire Department's Karla Cairns, said everything about the competition, from the training to the camaraderie, makes her better at her job.

"It's all job-related tasks in the competition," Penman said. "Any call that I go to I don't think I'm going to hurt as much physically as I do after a race."

Last weekend was the 22nd year of the Scott FireFit Championships. Co-founder Hilary McRoberts estimates that there were about 60 Canadian departments represented, with upwards of 350 competitors. About 26 of the entrants were women, which is a growing number, she said.

"This is our biggest showing of women – and they're competitive women," she said. "We've got a couple of schools competing and there are a lot of women who are competing from those schools."

Competitions are split up into FireFit relay (a three-person relay), FireFit X3 (a two-person technical relay) and FireFit individual/team (teams are made of three to five members).

Toronto Fire Services' women dominated in multiple categories over the weekend, coming out on top in women's team and tandem events, and breaking a 10-year record for women's relay with a time of 1:36.

The relay race is the most popular event and a good way to introduce new firefighters to the competition, McRoberts said.

"The relay is so much fun," she said. "You get to be on the course more and talk to one another. Everybody is relaxed and having fun."

But that doesn't make the relay knockout finals any less competitive. Teams go head to head and the faster time moves on, while the slower time is bumped out.

In the men's relay, this year's defending champion, the combat team from Hamilton Fire Department, once again made it to the last few rounds but was knocked out of the gold metal game. Hamilton narrowly beat Alberta's Fort McMurray Fire Department in the bronze round for the podium finish.

In the gold medal game, Edmonton Fire Rescue Services went up against British Columbia's Kamloops Fire Department. It was a tight race, but Edmonton came out on top.

Get all the results at firefit.com

See our Facebook gallery from the 2015 Scott FireFit Championships. 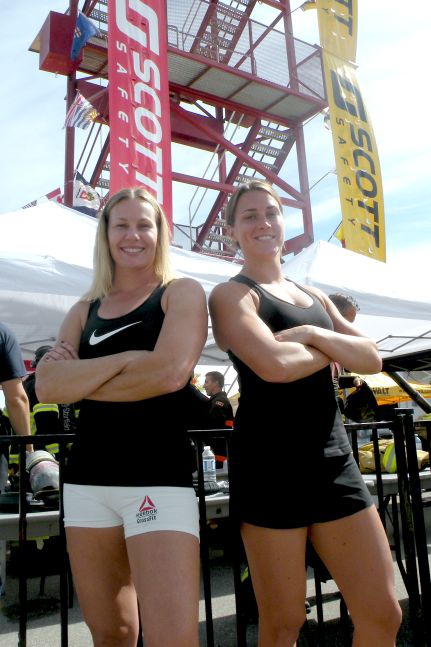 (Left to right) Carla Penman and Amber Bowman are forces to be reckoned with in the world of FireFit.
Print this page