Aug. 4, 2015, Simcoe, Ont. - The association that represents volunteer firefighters in Ontario is focusing on training and education to draw in new members.

The Fire Fighters Association of Ontario (FFAO) hosted a week of training in Wainfleet, 120 kilometres south of Toronto in the Niagara Region, in addition to its annual general meeting, trade show, firefighter games and memorial service on the weekend.

FFAO president Chris Karpinchick said the association’s goal is to offer top-notch training and, by doing so, attract new members and departments.

“We’re trying to offer the latest training possible by bringing in outside companies,” Karpinchick said in an interview. “We’ve had nothing but rave reviews on the training this week.”

Guest speaker Dave Connor, a mental-health consultant and district chief in Mississauga, wrapped up Saturday’s meeting with a talk on mental-health concerns in the fire service. Karpinchick said the FFAO is looking to be an information pathway for firefighters to learn more about mental-health supports available to them.

More than 300 firefighters from 55 fire departments attended the convention from as far away as Sturgeon Falls in northern Ontario. Attendees included 83 life members and 15 delegates.

The FFAO also announced the launch of its new website at the meeting, which uses the same address: www.ffao.on.ca. FFAO board member Brad Patton said he hopes the website’s new features and cleaner look will help members communicate, and attract new ones. 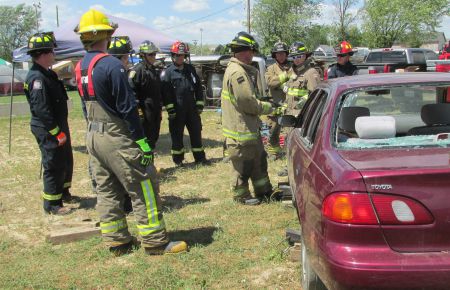 Firefighters take part in an advanced auto ex course offered by CODE 4 Fire & Rescue during the Fire Fighters Association of Ontario annual convention in Wainfleet last week. The association that represents volunteer firefighters in Ontario is focusing on training and education to draw in new members.
Print this page